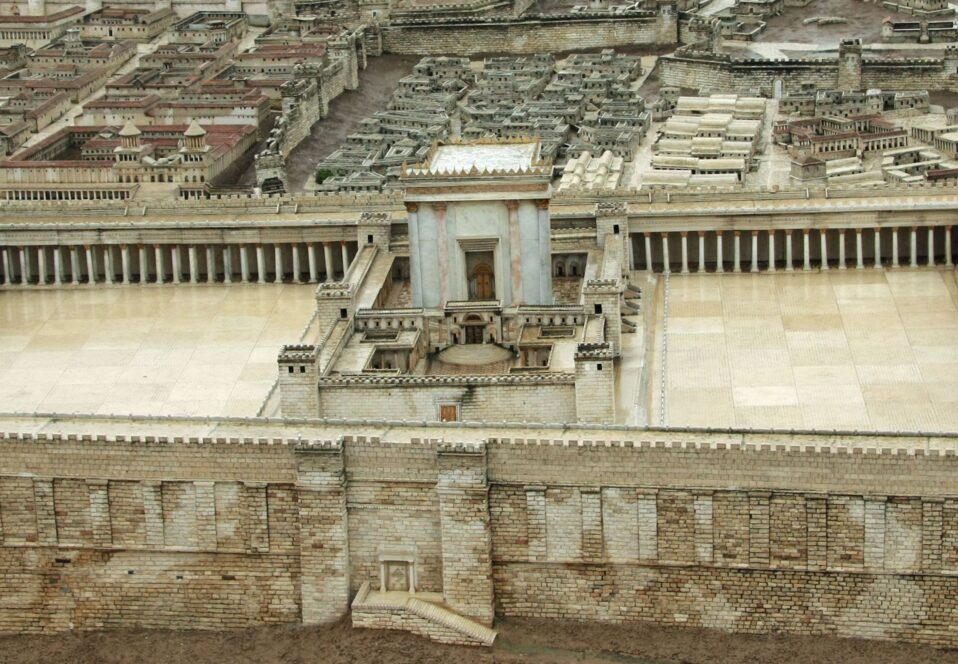 “Then He went into the temple and began to drive out those who bought and sold in it, saying to them, ‘It is written, “My house is a house of prayer,” but you have made it a “den of thieves.”’ And He was teaching daily in the temple. But the chief priests, the scribes, and the leaders of the people sought to destroy Him, and were unable to do anything; for all the people were very attentive to hear Him” (Luke 19:45-48 NKJV).

Jesus rode into Jerusalem in the week leading up to Passover on a wave of popularity and redemptive anticipation. Upon His arrival in Jerusalem, He entered the Temple and challenged the financial corruption of the chief priests. They were the ones who oversaw the sale of sacrifices and financial activities of the Temple. Jesus’ actions were not directed against the Temple itself; in fact, He never rejected the Temple, as evidenced by the actions of His followers after His death and resurrection, who continued to frequent the Jerusalem Temple and participate in its sacrificial system (Luke 24:53; Acts 3:1, 21:26).

His actions specifically targeted the sellers—the chief priests. He drove them out by quoting a passage from Isaiah and one from Jeremiah, “My house is a house of prayer,” but you have made it a “den of thieves.”’ Luke makes clear that this action led the chief priests and their scribes, those who were the principal men of the people, to seek to kill Jesus, but they could not do so openly because the crowds hung on His words. From this point, however, the chief priests of Jerusalem sought to kill Jesus, eventually having to arrest Him under the cloak of darkness—further evidence that the crowds of Jerusalem never turned against Jesus.

Why did His action elicit such a visceral response? The answer lies in Jesus’ teaching and His popularity, both of which threatened the power and wealth of Jerusalem’s chief priests.

Jewish sages, like Jesus, often taught by tying passages from the Old Testament together. Because the sage and the audience knew the Old Testament by heart, the simple mention of a phrase or line from a passage called to mind the entire context of the passage. Jesus did this when He combined Isaiah 56:7 and Jeremiah 7:11.

The fuller context of Isaiah 56 calls upon the people to both “keep justice and do righteousness” (56:1 NKJV). It offers the messianic promise of the restoration of the eunuch to bear children, the inclusion of the foreigner with the children of Israel, and the gathering of Israel’s dispersed.

This contrasts with the context of Jeremiah 7, in which Jeremiah predicted the destruction of the First Temple built by Solomon due to the corruption of the people. To “prove” his point, Jeremiah reminded his listeners what God did to Shiloh where the Tabernacle and Ark of the Covenant resided for a time (Jeremiah 7:12-14). This event seems to coincide with the capture of the Ark and the slaying of the corrupt priests Hophni and Phineas, who were the sons of Eli (1 Samuel 4). On that day, the Philistines captured the Ark and cut off the priesthood of Eli due to the corruption of the people.

Jesus’ fragmentary citation of Jeremiah 7:11 would have caused His audience to make that jump in an instant, and they clearly understood His message: Because of your (the chief priests’) corruption, God is going to judge this place (the Temple) and your priesthood will be cut off! From their response in the Gospels, they understood Jesus’ message very clearly, and due to His popularity with the people, He was a threat that needed to be removed.

The wealth of the high priestly clans of Jerusalem was legendary, as was their brutality and desire to protect their wealth. They controlled a monopoly setting prices for sacrifices, which often became so exorbitant that pilgrims to the Temple could not participate in the sacrificial system. A number of Jewish sources, including the New Testament, comment on the greed and brutality of the Sadducean chief priests.

Archaeological excavations in Jerusalem have uncovered high priestly homes that attest to the opulent and lavish lifestyle in which these priests lived. The largest of these homes—which contains beautiful fresco work, imported Roman pottery, and a hand-blown glass piece signed by the artist, Enion of Sidon—is over 6,000 square feet!

Jesus, and His popularity, threatened the power and wealth of this elite group. This sets the stage for the events of His last week, which culminate in His death and resurrection, carried out by the Romans in collusion with the chief priests of Jerusalem, who sought to protect their power and money at all costs. It was in their best interest to preserve the status quo with Rome, and so Jesus had to be eliminated.

These same forces are alive in our world today. The clamor of power and money leads many, including some Christians, to behave in ways God despises. Jesus’ citation of Isaiah 56 calls upon the people to “keep justice and do righteousness.”

He called upon the people to return to God and His ways. He calls us to do the same. We have to guard against the allure of power and greed by submitting daily to God’s rule and reign in our lives and looking for ways we can love those who are hurting and suffering in our world.

Father, may we “keep justice and do righteousness” in our world today. We submit our wills and ways to You, our God. Lead us in the paths of righteousness for Your name’s sake. Amen.

Your ticket for the: Weekly Devotional: The Temple Cleansing