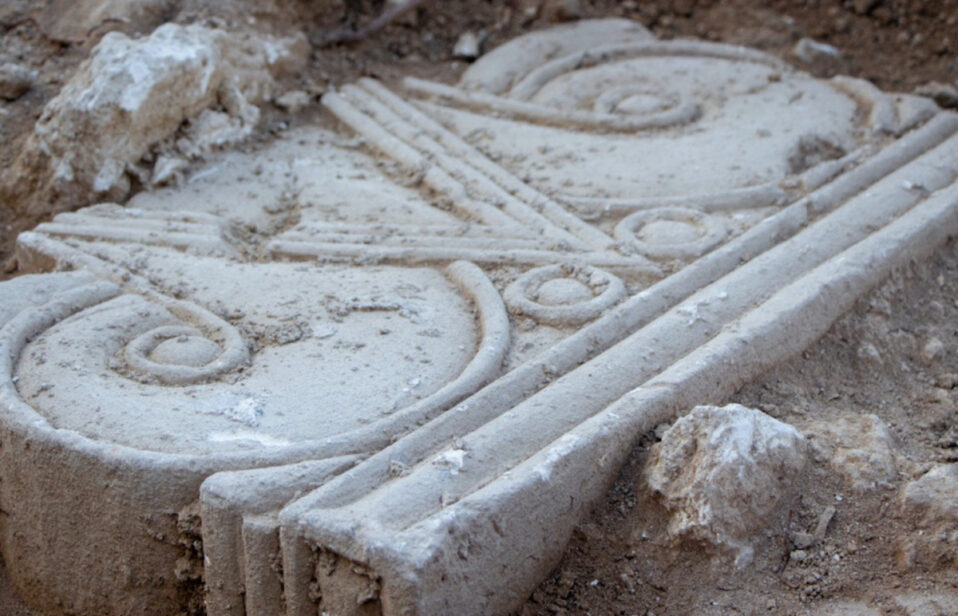 Yet, ancient discoveries once again serve as proof for the biblical account with a new discovery in Jerusalem, which thrilled archaeologists last week. They described it as a “once in a lifetime” find. While digging near the City of David, they were astonished to discover—in their words—“three immaculately preserved 2,700-year-old decorated column heads, or capitals, from the First Temple period indicate a connection to the Davidic Dynasty.” Their photographs show beautifully designed stone capitals that likely were once situated atop columns of a palace or estate. Five-shekel coins from the 3,000-year-old era display the same design motif!

Who would deny Israel its historic significance? A complicit United Nations, filled with those possessing a fierce anti-Israel bias, is quick to distort history. UNESCO, the United Nations Educational, Scientific and Cultural Organization, is one of the chief purveyors of such bias. UNESCO’s stated purpose is to assess cultural landmarks and designate World Heritage sites to “promote cultural heritage and the equal dignity of all cultures.” Shamefully, UNESCO has targeted Israel’s holiest sites, thereby undermining that nation’s dignity and removing the equality given to other nations.

In a controversial 2016 Resolution, for example, UNESCO decided to use only Arabic terminology for the Temple Mount, naming it Haram al-Sharif—not the Hebrew Har HaBayit, or Temple Mount as we call it. UNESCO calls Judaism’s holiest site—the Western Wall—by its Arabic name, al-Buraq, rather than its Hebrew name, Ha-Kotel Ha-Maʿaravi (Kotel for short).

By doing so, UNESCO deliberately ignores 3,000 years of Jewish geographical and cultural lineage. It attempts to rewrite Israel’s history one word at a time. Just consider: The Jewish First and Second Temples were built in 957 B.C. and 515 B.C., whereas the Muslim Dome of the Rock Shrine wasn’t built until between A.D. 685 and A.D. 691. That’s roughly 1,000 years after the Second Temple where Jesus and His disciples walked and taught. Not surprisingly, then, when UNESCO made its erroneous resolution, Prime Minister Benjamin Netanyahu asserted, “To say that Israel has no link to the Temple Mount is like saying that China has no link to the Great Wall or that Egypt has no connection to the pyramids.” Former U.S. Ambassador to the United Nations Nikki Haley correctly branded it “an affront to history.”

For the last 20 years, numerous archaeological discoveries all over Israel have been literally written in stone. The discoveries are physical proof, not a UNESCO document. It is rock-solid evidence that God gave Israel to the Jews, a divine deed to their ancestral homeland. Archaeology proves that the Bible is true.

In Genesis 15:18-21, God visited Abraham and made His plan clear. “I will assign this land to your offspring.” When Isaac was miraculously born, God’s plan was in motion with His covenant, a contract. It is eternal and unconditional. Despite millennia of catastrophic wars, dispersions, exiles, diaspora, Ottoman and British occupation, and the Holocaust, God re-established the Jewish homeland when Israel was reborn as a modern state in 1948.

Many of you reading my column have visited Israel. You have marveled at some of the antiquities uncovered in the tedious yet rewarding work of meticulous archaeologists. The finds have ranged from small ancient coins inscribed in Hebrew to a tiny bell worn on a Temple priest’s hem. The last 20 years of archaeology have proven exceptional. Sixteen years ago, expansive finds like the Pilgrim Road in Jerusalem opened a new world of facts. The Pilgrim Road was discovered by what I call “divine coincidence.” An alert workman saw light coming up through an opening in a street in Silwan, an Arab town. When he walked over to look into the hole, he viewed part of a subterranean road. Excitement escalated when the Israeli Antiquities Authority (IAA) was summoned. The IAA evaluates and oversees all discoveries.

The Pilgrim Road was not open to the public yet, but a good friend set up a VIP tour for two of us who were attending the GPO Christian Media Summit in 2019. Our CBN Israel news team dubbed the Pilgrim Road “The Beating Heart of Jerusalem.” I experienced my own heart beating in awe with each step along the 2,000-year-old road. It’s part of the larger area, the historically significant City of David. It took almost no imagination for me to envision Jesus and His disciples walking this road for the three major Jewish festivals: Pesach (Passover), Shavuot (Pentecost), and Sukkot (Tabernacles). Tens of thousands of Jews walked on the road constructed with big paving stones leading up to the Temple Mount. While they walked, they sang Psalms 120 through 134, the Pilgrim or “Aliyah” (Hebrew for “ascent”) Psalms. In ancient times, Aliyah on the Pilgrim Road meant “the act of going up” to Jerusalem. Today, it often refers to immigration to Israel. My emotions ran deep knowing I walked in the footsteps of Jesus, His disciples, Mary, and Joseph as they sang psalms making Aliyah to the Temple.

Each archaeological discovery adds another layer of truth to the fact that Jerusalem and all of Israel is the Jewish homeland. A few years ago, workmen were digging near Jerusalem’s western entrance and noticed a broken stone pillar around three to four feet tall. They immediately called the Israeli Antiquities Authority. When the experts arrived, they were astonished to read this inscription: “Hananiah son of Dodalos of Yerushalayim.” The Dead Sea Scrolls discovered in 1947 used the same Hebrew spelling of Jerusalem, but the pillar was the first example of Jerusalem’s name written in stone, the way “Jerusalem” (Yerushalayim) is written today!

The 100 B.C. pillar is now on display at the Israel Museum. I made a point to visit the exhibit during one of my trips to Israel and asked someone to take a picture of me standing next to the glass-encased pillar. I found myself wishing that the UNESCO members would see the proof in stone. I wondered if they would finally accept the fact about the ancient/modern spelling of Yerushalayim. No matter. UNESCO does not carry the weight of authentic history; the Bible and the Yerushalayim pillar fill that role. UNESCO has utterly failed the Israeli history course, but the Bible remains accurate, proven by the very stones that silently broadcast the eternal message from the God of Abraham, Isaac, and Jacob.

One of the Aliyah psalms, 125:2, reminded ancient Jews of God’s faithful protection (as it reminds us today): “As the mountains surround Jerusalem, so the LORD surrounds His people from this time forth and forever.”

Joining CBN in prayer, let us recall this wonderful pilgrim song sung on the Pilgrim Road.

Let us pray that Israel’s rich history will continue to unfold as archaeological finds reveal this land’s extraordinary past—and point to a remarkable future.

Your ticket for the: Archaeology Proves Israel is the Jewish Homeland