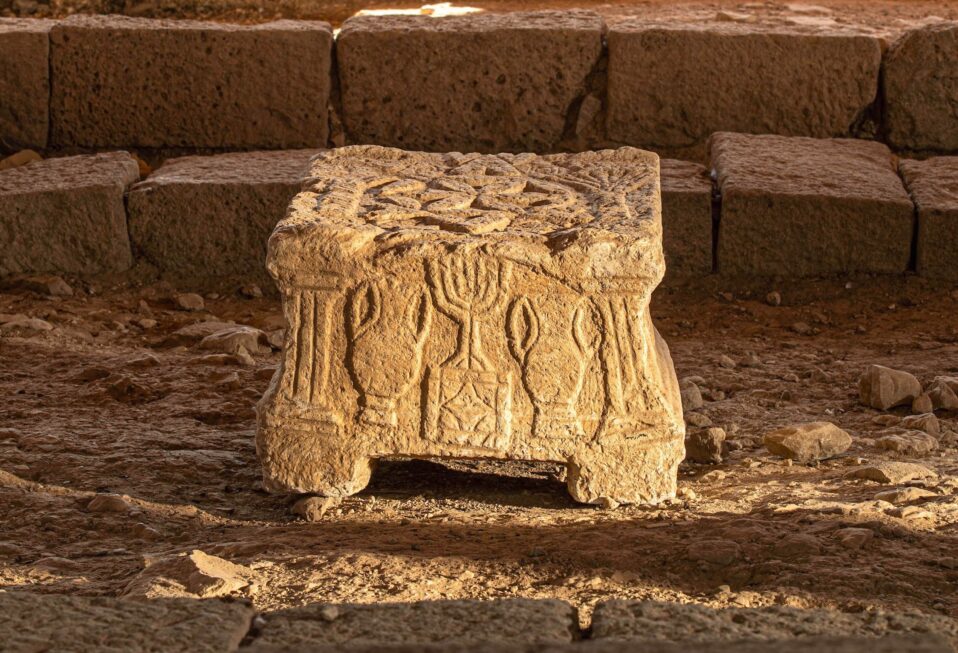 The site of Magdala sits a little over three miles north of Tiberias, on the southern edge of the plain of Gennesar, on the shore of the lake of Galilee. Ancient sources seemingly refer to this site by three names; Greek and Latin sources refer to it as Taricheae; Hebrew and Aramaic sources use the names Magdala or Migdal Nunaya. Although a question remains whether all three names refer to the same site, many accept that they do. Since the Byzantine period (4th-7th centuries A.D.), tradition has identified this site as the home of Mary Magdalene, mentioned in the Gospels, but Mary’s connection with this site is by no means certain.

The ancient sources written in Greek and Latin, dating to the 1st century, refer to the site as Taricheae. Taricheae served as an important administrative center from the 1st century B.C. into the 1st century A.D. Its name in Greek refers to “factories (vats) for salting fish.” The city’s location on the shores of the lake of Galilee indicate that fishing and fish processing served as its primary industry. The administrative role of the city, as well as its size, suggest that its fishing and fish processing involved smaller villages that lay within its toparchy, like Capernaum.

Gennesar (Gennesereth) is a large fertile plain on the northwest corner of the lake of Galilee. The name refers to the region of the fertile plain. Magdala functioned as the largest city and port serving the Gennesar Valley; thus, when Jesus arrives by boat to Gennesar (the region) in the Gospels, he likely used the port of Magdala.

Archaeologists first excavated a small section of the site in the 1970s. Excavations since the 2000s have provided a number of significant finds that shed light on Jewish life around the lake of Galilee during the ministry of Jesus. Excavations have uncovered installations that likely served for the processing and salting of fish, indicating the identification of the site as Taricheae. They also uncovered a series of streets laid out in an urban grid pattern, and along some of these streets, houses were uncovered that speak to the wealth of the people that lived in them. They were built with finely cut stones having mosaic tile floors. Pottery and glass vessels discovered in these homes further speak to the wealth of the inhabitants. These homes also had private Jewish ritual immersion baths (mikva’ot). Ground water filled and refilled these pools. Their presence is rather unique since the lake itself could serve Jewish ritual purity needs. The owners of these homes apparently desired a high degree of ritual purity, which required them to include private ritual immersion baths in their homes.

Excavations uncovered the ancient Hasmonean (1st century B.C.) and early Roman (1st century A.D.) harbor of Magdala. Pottery and coins provided a clear date for the structure, which had the mooring stones still in place. This harbor served the fishing industry of Magdala, as well as provided transit for travel around the lake. Magdala sits just below Mount Arbel, which overlooked a pass through which a road led from the northwest corner of the lake west into Galilee, and which could also be used by Galilean pilgrims traveling to Jerusalem.

Excavators uncovered a modest public building, which they have identified as a synagogue. This building consists of three phases. The middle phase dates to the early-mid 1st century A.D. This structure consists of an entrance with a narrow rectangular hall from the west, possibly a room for study known as a beit midrash. One passes from the entry vestibule into the main hall, which is surrounded on all sides by benches. This placed the focal point of the hall in the center of the room (this is a common layout for first century synagogues). The aisles had mosaic floors, and the columns of the main hall were covered with frescoed plaster. The walls also had frescoes plaster upon them. In the center of the main hall, archaeologists discovered a stone with four short legs. This decorated stone preserves a number of images, the most striking of which is the seven branched menorah that resided in the Jerusalem Temple. The iconography of this stone seems to tie to the Temple in Jerusalem indicating that those in this synagogue connected their worship with the worship in the Temple.

In the land of Israel in the 1st century, the primary function of the synagogue was the reading and teaching of the Torah. We see this with Jesus in the Gospels. The layout and orientation of 1st century synagogues in the land of Israel, like the one in Magdala, focus on the center of the hall where the Torah would be read and expounded upon. This stone discovered in Magdala has been identified as the base for a Torah reading stand. Jews read the Torah standing; they sit to teach (just like Jesus; see Luke 4:16-20). This decorated stone likely served as a base for a stand for the Torah reading, when all eyes would be fixed on the one reading and explicating the Torah (Luke 4:16-20).

The Gospels do not mention Jesus in Magdala. Yet, he sailed to the region of Gennesar where Magdala was located. He taught in all the synagogues of the villages and cities of Galilee. The Magdala synagogue dates from the time of his ministry; he could have taught there. Excavations at Magdala reveal that the population of the Galilee in the 1st century was Jewish, and devout Jews at that. Some had wealth, but they adhered to Jewish concerns of purity and worship.

Your ticket for the: Biblical Israel: Magdala