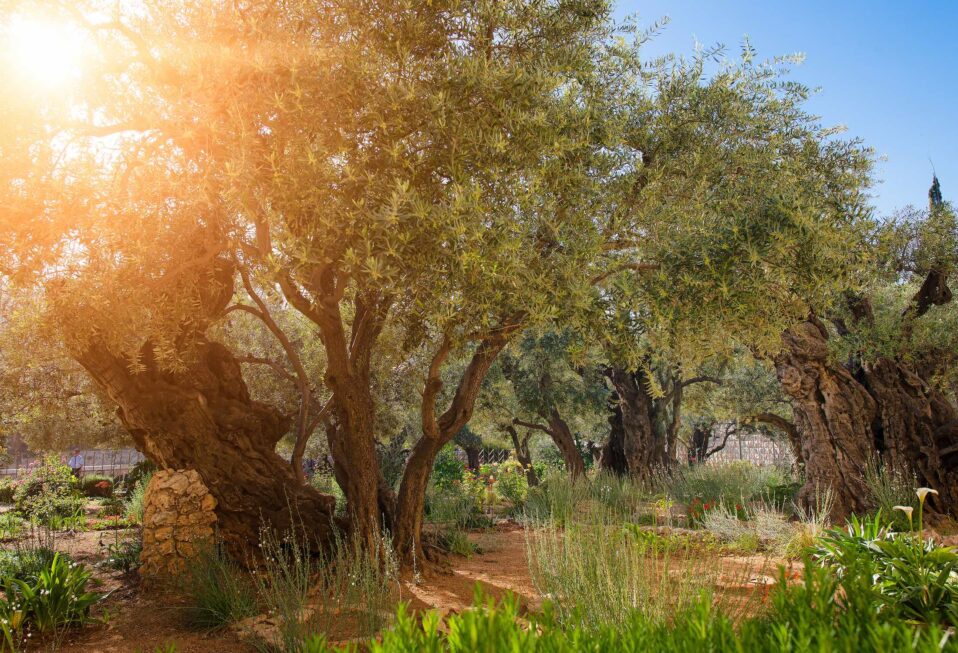 Mark and Matthew identify Gethsemane as the place Jesus went with His disciples after eating the Passover within the city of Jerusalem, prior to His arrest (Matthew 26:36; Mark 14:32). These two Gospels provide the only mention of this place within ancient sources; thus, pinpointing its location proves difficult.

The Gospel of Luke describes Jesus going to the Mount of Olives (22:39), which sits to the east, across the Kidron Valley (see John 18:1), from the city of Jerusalem. Passover pilgrims would consume their Passover meal, which was the lamb offered in the Temple, within the walled city of Jerusalem, but they stayed outside of the city on the surrounding hillsides.

Pilgrims to Jerusalem today can visit four different sites, which Christian traditions (Roman Catholic, Russian, Armenian, and Greek Orthodox) have identified as Gethsemane. All reside on the Mount of Olives. The traditions of these sites only date back at the earliest to the fourth century A.D. The most popular is the Roman Catholic site, maintained by the Franciscans.

This site contains a church built by the Italian architect Antonio Barluzzi and a grove of olive trees. Some of these trees are several hundred years old, but they do not, as some claim, date back to the time of Jesus. The first century Jewish historian Josephus relates how the Roman army that laid siege to Jerusalem cut down all the trees in the vicinity to build their siege engines (War 6:1).

While we do not know the precise location of Gethsemane, its location on the Mount of Olives offers an important geographic window into Jesus’ prayer in Gethsemane. The Mount of Olives sits on the eastern watershed of the Jerusalem hill country. Beyond the mountain’s ridge, the land drastically falls away toward the Jordan River Valley and the area of Jericho and the Dead Sea. This wilderness served bandits and refugees for centuries as it provided natural concealment to those hiding from authorities.

When Jesus prayed in Gethsemane, He physically stood at the door of escape. He could have walked less than an hour and disappeared from Caiaphas and Pilate. This heightens the tension of His prayer, “Father, if it is Your will, take this cup away from Me; nevertheless not My will, but Yours, be done” (Luke 22:42). In that moment, He turned His back on the door of escape to face God’s will that lay in front of Him, the cross.

This is something that can only be truly appreciated when one stands in this geography and realizes the choices that lay in front of Jesus: how easily He could have saved Himself, yet He submitted to His Father’s will.

Your ticket for the: Biblical Israel: Garden of Gethsemane