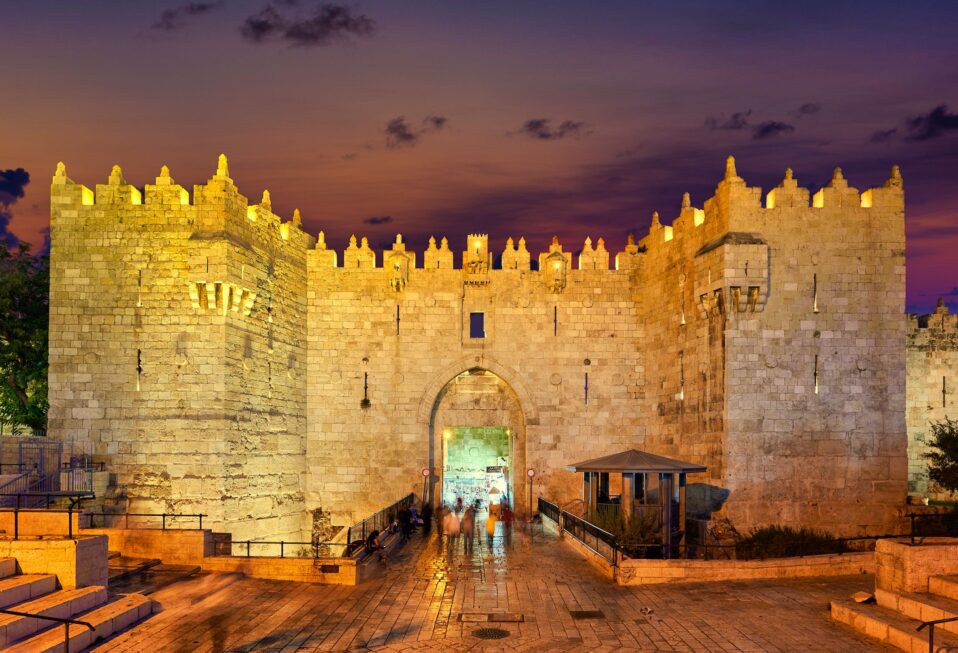 Visitors to the Old City of Jerusalem today can enter the city through seven gates scattered around its eastern, southern, western, and northern sides. These gates, like the walls of the Old City, date to the Ottoman Period (16th-20th centuries).

Along the northern stretch of the Old City walls are three gates, from west to east, New Gate, Damascus Gate, and the Flower (or Herod’s) Gate. The current Ottoman Damascus Gate stands upon the remains of a triple-arch gate that dates to the Roman remains of Aelia Capitolina, which was the name given to Jerusalem in the 2nd century A.D. by the Roman Emperor Hadrian. The center arch was the largest, and the two side arches were lower.

After the destruction of Jerusalem by the Romans in A.D. 70, the city’s footprint changed due to the damage caused by the Roman forces in certain parts of the city, particularly the southern area of the city. This caused the city to shift north and west in the Late Roman Period. From the 2nd century A.D., Jerusalem began to look like a Roman city, which the Old City of Jerusalem more or less parallels until today.

The Roman Emperor Hadrian renamed Jerusalem, Aelia Captitolina, and the province Judaea, he changed its name to Palestina. As part of the rebuilding of Jerusalem (Aelia Capitolina), the triple-arch, on which Damascus Gate now stands, was constructed.

This triple-arch gate marked the northern limit of the city. The triple-arch gate was originally free standing, but in the late 3rd century, it was connected to the city’s wall. Entering through the arches, one encountered a paved plaza (similar to what one does entering through today’s Damascus Gate) in which Jerusalem’s two main north-south roadways came together. It seems that a column stood in this plaza, probably with a statue of the emperor on it.

A mosaic map of the Holy Land in the floor of a church in Maedaba, Jordan that dates to the 6th century A.D. depicts the column, without the statue, standing in the plaza in front of the Damascus Gate. Until today in Arabic, one refers to Damascus Gate as Bab al-‘Amud, the Gate of the Column, which retains the memory of the column in the plaza.

The triple-arches of the Later Roman Period were built on a stretch of wall that dates back to the first century.

Your ticket for the: Biblical Israel: Damascus Gate