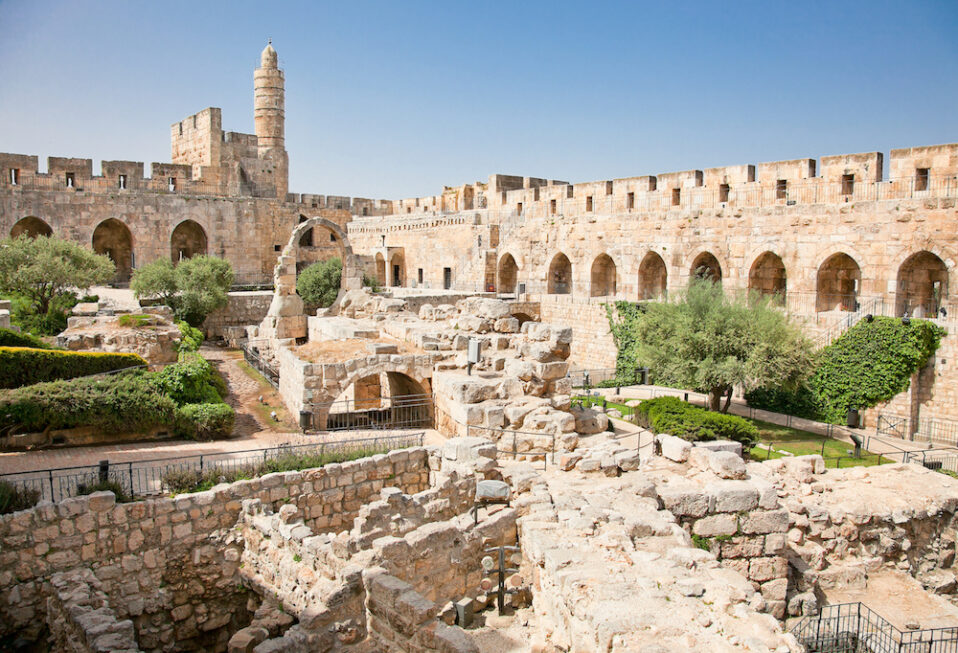 The only gate on the western side of the modern Old City of Jerusalem is Jaffa Gate (so named because the road leading to Jaffa goes through this gate). Inside Jaffa Gate stands the Citadel or the Tower of David. This structure has nothing to do with David, which can confuse modern visitors to Jerusalem.

The buildings and tower that stands today are built upon the highest point of the city at the end of the Old Testament Period and in the first century. In fact, the wall of the city in these periods turned to the east at this point going towards the area of the Temple Mount. The wall followed a shallow ditch that ran west to east along Jerusalem’s northern boundary. This offered the city’s only natural protection on its northern approach.

In the first century, Herod the Great chose this strategic location to build his palace in Jerusalem. Its elevated position enabled him to look down over the Temple Mount. Because of the city’s vulnerability to the north, he built three large towers on the northern end of his palace. He named them Phasael (after his brother), Mariamme (after his beloved Hasmonean bride), and Hippicus. The base of one of these three towers forms the base of the Tower of David.

Herod had palaces throughout his kingdom—Jericho, Caesarea, his palace-fortresses at Masada, and Herodium—but his Jerusalem palace was his largest and most splendid. He decorated it with all kinds of colorful, inlaid stones. Remains of two large pools have been excavated. He built two large building complexes within the palace, one he named Caesareum (after Caesar Augustus, his friend and benefactor) and the other Agrippeum (after Marcus Agrippa, Augustus’ number two man). Herod’s palace had its own aqueduct that provided for its water needs. The aqueduct originated south of Bethlehem. In this palace, Herod would have questioned the wise men seeking the baby Jesus (Matthew 2).

The Roman governors resided in Jerusalem during the Jewish festivals to keep civic order, and they stayed at Herod’s palace. Jesus was brought before Pilate in Jerusalem to the praetorium, which Mark’s Gospel refers to as “the palace” (Mark 15:15). The most likely location in Jerusalem for this encounter was in the palace of Herod the Great. The mention in John’s Gospel of the lithostratos, which is a Greek term meaning “an inlaid stone floor,” further suggests Pilate’s location within Herod’s palace, which Herod had decorated with colorful stones.

The earliest Christian traditions that follow Jesus’ journey from being beaten to his point of execution follow a route that begins in the area of Herod’s palace to the Church of the Holy Sepulcher, as attested by the Bordeaux Pilgrim. In this way, Herod’s palace serves as a key location at Jesus’ birth and his death.

Your ticket for the: Biblical Israel: Tower of David