From Prison in Iran to Freedom in America, She Still Speaks Truth 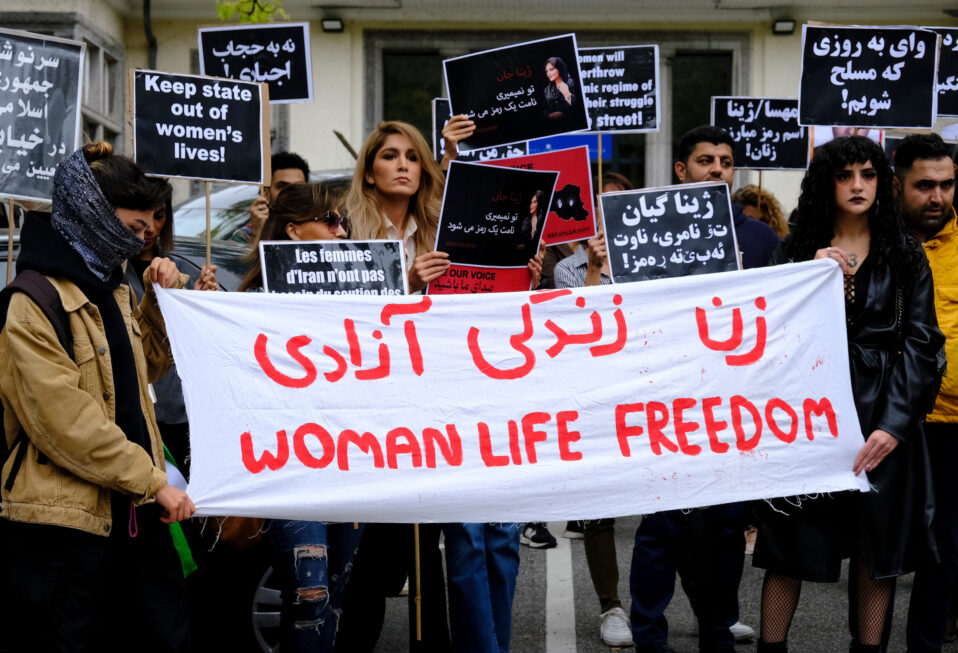 I have followed and written about Iran’s 1979 Islamic takeover until the present-day “Women, Life, Freedom” movement protesting this ruthless regime. Given my long interest in communicating about the dangerous Islamic Republic leadership, God blessed me as only He can. He orchestrated my meeting Iranian Christian Marziyeh (Marzi) Amirizadeh in a doctor’s office waiting room! I then welcomed the privilege of interviewing her.

She breathed life into facts far beyond any broadcasts or commentary could do. Risking their lives in Iran’s oppressive regime, Marziyeh and her close friend Maryam Rostampour covertly shared the Gospel. With undercover deliveries from believers outside Iran, Marzi and Maryam gave away 20,000 Bibles and founded several secret house churches. After four years, they came to the attention of officials who arrested them in 2009.

When the guard booked them, he hung a sign around their necks with their names and charges that read, “Accused of promoting Christianity in Iran.” He then took their pictures, whereupon smiles spread across Marzi and Maryam’s faces. They viewed the accusations as an honor.

They were jailed in Iran’s Evin prison, notorious for its harsh treatment of political prisoners. Its unfettered brutality is feared among Iranians who live in the world’s biggest terror-sponsoring regime. From their beloved homeland, taken over by ayatollahs who want to rule the world by any means, the Islamic Republic regime has conducted terrorist attacks and assassinations in more than 20 nations since 1979.

Marziyeh and Maryam remained imprisoned for 259 days. During their captivity, the Holy Spirit shone through them with officials and prisoners alike into the unimaginable darkness within Evin’s walls before their miraculous release. Marzi’s best-selling books, Captive in Iran and A Love Journey with God, detail the severe hardships—and the miracles—as a significant reminder of wide-ranging persecutions among some 360 million Christians worldwide living under tyranny.

Since immigrating to the United States, Marzi has received her master’s degree in International Affairs from Georgia Tech and ran this year for Georgia’s legislature. Although she did not win the seat, it was a way for her to highlight the privilege of religious freedom in the context of Iran’s threats to the United States. She plans to persist in advocating for Iran’s 85 million people, 70 percent of whom are under 30 years old. During her imprisonment in 2009, she recalls, “I was witness to how many people got arrested and tortured right in front of my eyes. It broke my heart.” With radical clerics running the government, Iranians are understandably afraid. However, “Women, Life, Freedom” protests in the last three months are clearly showing the people’s bravery and their yearning for freedom.

Marzi’s continuing purpose in life is to draw attention to the oppression of Iran’s people. She is troubled about media bias and their refusal to give a platform to Christians like her who have lived under persecution and want to offer facts to correct/embellish the narrative of suffering.

She “strongly believes” that this protest will go on. It began in September 2022 following the death of 22-year-old Mahsa Amini. Under arrest for improperly wearing her head covering (hijab), Amini was beaten to death while in “morality” police custody. Marzi observes, “It’s not just about a piece of cloth. The protesters are not in the streets facing guns and bullets just for that. Our people wonder if the Western nations are going to stand with them for regime change rather than betraying them by making deals.” She suggests that nations recall their ambassadors from Iran and stop negotiations and any financial support that would release billions of dollars “used to suppress and kill more people.” The Biden administration’s temporary decision to keep the Islamic Revolutionary Guard Corps (IRGC) on the Foreign Terrorist Organizations List was welcomed by Iranians.

The “Women, Life, Freedom” movement embodies decades of simmering frustrations especially among the younger population, which has given up on reforms. Marzi articulates that Iranians consider themselves and their country separate from what they view as a criminal regime and believe that they and Iran have been taken hostage by the Islamic Republic. She explained, “Sharia law has ruined their lives, but it’s not that they are turning their back to God. As soon as you are born, there is no option for you. Papers are filled out right away and you became a Muslim.” She added that only the Koran is available in bookstores, and that millions of people never practice Islam.

The Islamic dictatorship’s injustices, tight social and political control, economic hardships, and discrimination against ethnic minorities prevail. Marzi explains, “For many years the regime has deceived people about reforms, saying it just to calm people down.” What’s different now? “This time, people are saying ‘enough is enough’ and say they will fight until the regime collapses.” Human Rights Activists News Agency (HRANA) reports that, since September, more than 500 people have been killed thus far, among them 63 children. The prison population is bloated, with an estimated 18,000 detained and 39 who may face a death sentence. One protester, Majid-Reza Rahnavard, 23, was executed publicly. He was convicted of “waging war against God,” a capital offense. His body hung from a crane in the northeastern city of Mashhad.

During my interview, Marzi reflected on her life growing up, which answers important questions about today’s protests. “Every morning at school, they forced us to stand in line and say, ‘Death to America and death to Israel,’ that Israeli people are our enemies, and they should be eliminated from the face of the world. That is cruel to brainwash little children.” She explained that the radical clerics’ ideology teaches students that the Twelfth Imam will come to conquer the world through an Islamic caliphate and that “you will go to heaven by destroying Israelis and Americans.”

Marzi considers herself fortunate, since one of her father’s relatives married an American woman. When they traveled to Iran, as a child Marzi loved hearing about America. She views it as a miracle and dreamed about one day coming to America. “Finally, God brought me here and I’m so blessed and honored to live in this great country.”

She verified that Iran has the fastest-growing church in the world “coming to Christ. Persecution is helping people to see the truth. “When we were evangelizing in Iran,” Marzi recalls, “we didn’t have even one bad experience. Everyone was so thirsty to find the truth and I could see that God had prepared their hearts even before we talked to them.” She adds that she “strongly believes” that millions of people will come to Christ very soon. She referred to Jeremiah 49:38: “‘I will set my throne in Elam and destroy her king and officials,’ declares the LORD.” Genesis 10:22 shows that the region was named for Elam, son of Shem, son of Noah. The civilization existed for thousands of years, from 3200–539 B.C.

Amid the insults, torture, intimidation, and threats of a death sentence, Marzi experienced timely answers and Bible verses where God brought illumination into her mind and emotions. “It was very difficult, but the Holy Spirit reminded me that I should practice how to love my enemy since Jesus told us to ‘love your enemies and pray for those who persecute you.’” Once, when an interrogator asked her to give him the name of her pastor, she responded, “Jesus Christ is my pastor.” On another occasion—among frequent abuses—when a prison employee asked why she was incarcerated, Marzi answered, “I’m here just because of my faith. I’m not a criminal.” The response: “You should be executed!” She survived the brutality amid the beauty of having a relationship with Jesus through the power of the Holy Spirit. “Without the Holy Spirit, it is nothing but a religion.”

When I asked Marzi to articulate her message to Americans, she referred to 1 Corinthians 12:25-26: “God has so composed the body … that there may be no division in the body, but that the members may have the same care for one another. And if one member suffers, all the members suffer with it.” She added, “The church in Iran is suffering for justice and we have a responsibility to stand in solidarity with Iranians who are fighting against the enemy of the church and the world. Our duty is not just reading our Bibles at home, enjoying our freedom, and going to church. For me, faith without action is dead. Everywhere Christians must stand up for freedoms before it’s too late. The Islamic Republic regime is a threat to the whole world. They are spreading agendas into your soul. Do not invite this evil to your home and to your country. Wake up!”

Getting to know Marzi—and experiencing the authenticity of her courageous faith and her calling—inspired me to appreciate my religious freedom more deeply. I pray you will also be inspired to uphold Iran and other nations that persecute and kill Christians by praying, advocating, and donating to ministries aimed at blessing and rescuing the persecuted.

May we ponder this verse in Joshua 1:9—“Have I not commanded you? Be strong and courageous. Do not be frightened, and do not be dismayed, for the LORD your God is with you wherever you go.”

Please join with CBN Israel in prayer this week for Christians in the Middle East:

Your ticket for the: From Prison in Iran to Freedom in America, She Still Speaks Truth

From Prison in Iran to Freedom in America, She Still Speaks Truth