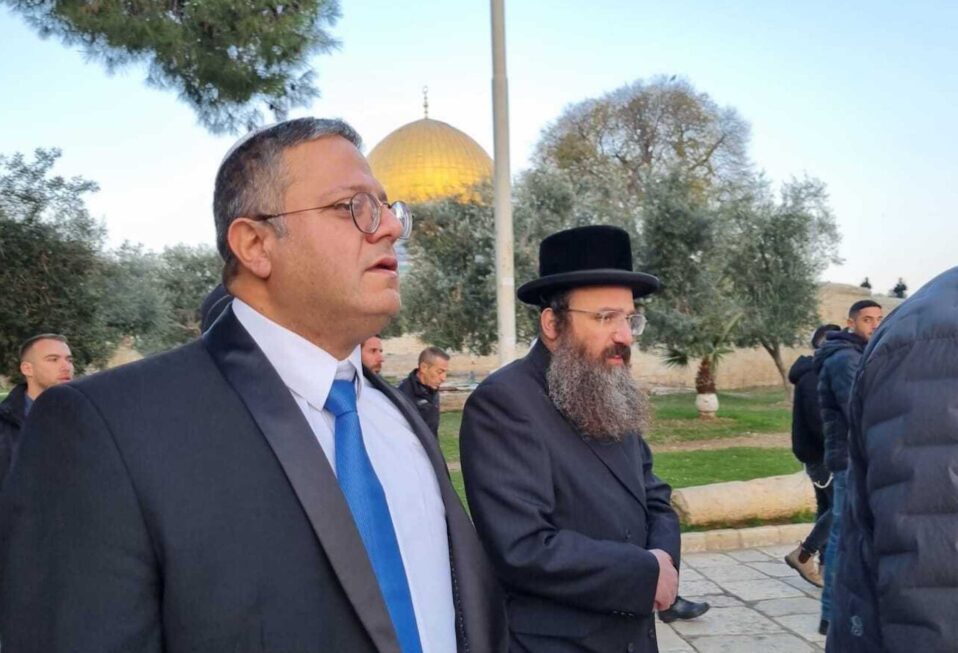 The Temple Mount is Judaism’s holiest site. Jerusalem is the ancient and modern Jewish capital, and Israel is the ancestral Jewish homeland. These are verifiable and substantiated facts of history!

Yet Itamar Ben-Gvir’s visit to the Temple Mount last week proves once again that the deepest dogma of anti-Semitism since the Holocaust is against the foundation of Judaism itself. While Ben-Gvir is an extremely divisive and controversial figure, this does not erase the fact that the Temple Mount is still the holiest site for the Jewish people.

Anti-Semitic attacks wrapped in lies can be likened to another version of an improvised explosive device (IED), as evidenced by how condemnation of Ben-Gvir’s visit to the Temple Mount detonated across the world. Last week, Ben-Gvir—newly appointed as Israel’s National Security Minister—decided to do the unthinkable: he, a Jew, walked up to Judaism’s holiest site. The Temple Mount is permanently inscribed in Jewish biblical history, secular history, and archaeological discoveries. Its walls were built around the summit of Mount Moriah.

Biblically, this is where Abraham offered his son Isaac as a sacrifice. In Genesis 22:1-2, we read: “Some time later God tested Abraham. He said to him, ‘Abraham!’ ‘Here I am,’ he replied. Then God said, ‘Take your son, your only son, whom you love—Isaac—and go to the region of Moriah. Sacrifice him there as a burnt offering on a mountain I will show you.’”

During this Second Intifada, from 2000 to 2005, Palestinian Muslims murdered more than a thousand Israeli civilians on the streets, on buses, and in restaurants. It wasn’t until months later that the Palestinian Authority Communications Minister, Imad Faluji, acknowledged that the uprising after Sharon’s visit had been part of Arafat’s plan to trigger more violence. By then it was far too late. The lies hardened into a counterfeit version of history and still circulate around the globe to this day.

Earlier history from 1967 describes an unfortunate yet well-meant decision by Moshe Dayan, a respected Israeli general and statesman. (The Israel Defense Forces miraculously changed history and united east and west Jerusalem and recovered their biblical heartland: Judea and Samaria.) In an act of tolerance and religious freedom, General Dayan opened a door after Israel’s victory in the Six-Day War. He allowed the Jordanian Foundation, the Waqf, to remain as the administrator of the Temple Mount. Jordan had ruled over the Temple Mount, east Jerusalem, and the Western Wall (Kotel) for 20 years since Israel’s independence on May 14, 1948. The Jordanians excluded Jews from their holiest site, the Temple Mount, as well as the Western Wall.

Fifty-six years have passed, and the Waqf’s grip remains tight and has produced a mountain of historical forgetfulness teamed with propaganda. Slight improvements have taken place at the site. Nevertheless, atop the 32 acres, which can accommodate more than 400,000 worshippers, Jews are limited in their visitation days, and hours, and they can enter only through the Mughrabi Gate adjacent to the Kotel. Christians are also penalized. Scripture enlightens us that Jesus, our Jewish Messiah, frequented the Temple Mount.

The current media reports about Ben-Gvir’s visit rely on sensationalism, not historic facts. The media parrots the Palestinians’ erroneous narrative of history. Astonishingly, the United Nations declared an emergency meeting last Thursday in protest. Gilad Erdan, Israel’s Ambassador to the United Nations rightly commented, “There is absolutely no reason that this emergency session should be held. To hold it on a non-event is truly absurd.” He then asked, “Why are we holding an emergency session for something as simple as a Jew walking to the holiest site in Judaism?”

Indeed! Since 1967, the Jordanian Waqf still governs the Temple Mount with countless uncalled-for actions. Their policies eventually mutated into a United Nations General Assembly vote a few years ago in a Resolution—129 to 11, and 31 abstentions—to refer to Judaism’s holiest site only by its Arabic names: Haram al-Sharif (Noble Sanctuary) and al-Buraq, the Western Wall. What a travesty!

In Hebrew, the Temple Mount is called Har Habayit, the site of the First Temple, which was built in 957 B.C. and destroyed in 587/586 B.C. The Second Temple was completed around 516 B.C. and destroyed by the Romans in 70 A.D. Jesus visited and worshipped in the Second Temple throughout His life. As mentioned previously, the current location of the Temple Mount was originally known as Mount Moriah, which marks Abraham’s profound moment of obedience when God asked him to sacrifice his son. Antiquity verifies these facts in contrast to the more recent Dome of the Rock (A.D. 691) and the al-Aqsa mosque (A.D. 705). In fact, both Jewish Temples predate Islam’s incursion by 1,700 years!

The facts were not always distorted. In 1924, an Islamic guidebook written by the Supreme Muslim Council recognized the Temple Mount’s Jewishness. “Its identity with the site of Solomon’s Temple is beyond dispute. This, too, is the spot, according to the universal belief, on which ‘David built there an altar unto the LORD and offered burnt offerings and peace offerings’” (2 Samuel 24:25). Almost 100 years later, the massive amounts of propaganda have attempted to erase these facts.

As part of our discussion, let us acknowledge Islam’s foremost sacred place, Mecca, and its second most holy site, Medina, both of which are in Saudi Arabia. A pilgrimage, the Hajj, takes place in Mecca annually—where upwards of 2.5 million Muslims circle and pray around the Kaaba, a cube-shaped structure, the holiest shrine in Islam. All Muslims are required to visit Mecca at least once in their lifetime if financially and physically feasible.

Muslim pilgrims walk a path they believe to have been taken by the Prophet Muhammad 1,400 years ago and spend five days performing rituals said to bring them closer to God. Hajj occurs in the last month (Dhul-Hijjah) of the Islamic calendar. In 2023 it takes place June 27–July 1 on Islam’s lunar calendar. Non-Muslims are not allowed at the Hajj. Saudi government bans non-Muslims from Mecca itself.

Do world leaders ever condemn Saudi Arabia over such restrictions at the Hajj? Does the global mainstream media ever report negatively on these matters? Are Muslims ever condemned for holding to their religious traditions?

The United States, Jordan, and nations in Europe and beyond quickly lined up against Israel minutes after Ben-Gvir walked back down to the Western Wall Plaza. The Crown Prince of United Arab Emirates accused Ben-Gvir of “storming the al-Aqsa mosque.” Yet however controversial or provocative the National Security Minister is deemed to be, Ben-Gvir went to the Temple Mount at 7 a.m.—a prescribed hour for Jews. In fact, as CBN News recently reported: “Ben-Gvir consulted with Prime Minister Benjamin Netanyahu before his visit, and also met with Israeli police and internal security officials. His time on the Temple Mount lasted about 15 minutes and ended without incident.”

This truth must be strongly restated because of the barrage of attacks against it. As I said at the beginning of this article, these truths are substantiated facts of history and cannot be disputed: The Temple Mount is Judaism’s holiest site. Jerusalem is both the ancient and modern Jewish capital, and Israel is the ancestral Jewish homeland. And even so, Israel remains dedicated to sharing its most sacred site with the three monotheistic religions—Judaism, Christianity, and Islam.

Proverbs 12:22 tells us that “Lying lips are an abomination to the LORD, but those who act faithfully are His delight.”

Join us at CBN Israel in praying for truth to prevail when it comes to Israel:

Your ticket for the: Widespread Anti-Semitic Defamation Attempts to Erase Judaism’s Holiest Place