Jesus’ Overlooked Statement That Could Have Changed Jewish History 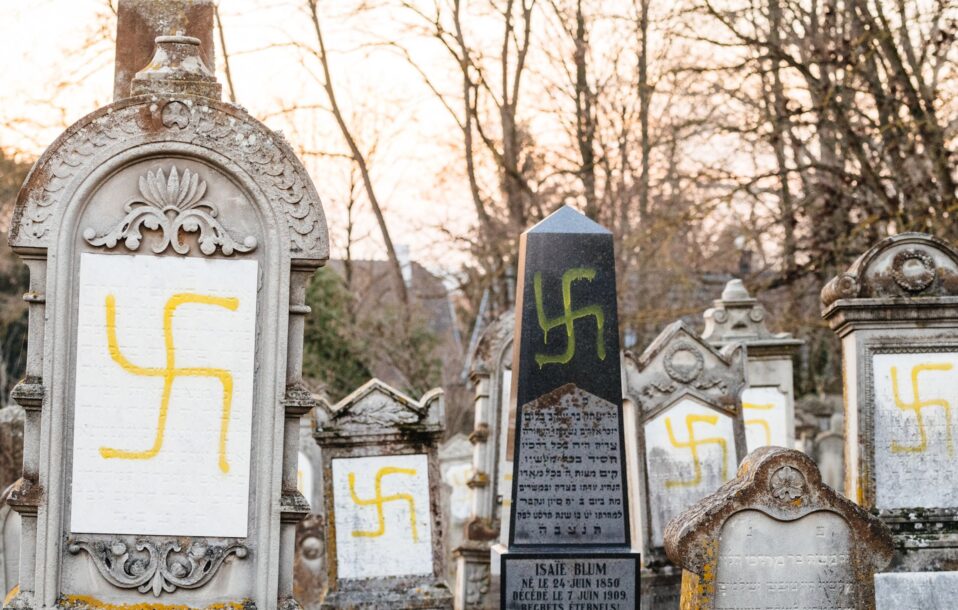 Is it possible that overlooking one of Jesus’ most profound declarations could have been a leading cause of the cancerous spread of anti-Semitism in churches and communities throughout the world? This cancer has endured for centuries, and the diagnosis is clear: It’s a malignant melanoma. Left untreated, this cancer is deadly. Its simplest definition, “hostility to or prejudice against Jewish people,” also applies to Israel, the world’s only Jewish state.

Yet even after centuries of hostility toward the Jewish people—the targeting of Jewish communities during the Crusades and the Inquisition, bloody massacres of Jews during the pogroms of Russia and Europe, 6 million Jewish men, women, and children killed by the Nazis in the Holocaust during World War II—the cancer of anti-Semitism is still on the rise.

So, what is Jesus’ pivotal statement that held the potential to diffuse anti-Semitism within churches across the globe? It’s found in John 10:17–18. In response to His confrontation with the religious leaders, when He healed a blind man on the Sabbath, Jesus boldly declared, “The reason My Father loves Me is that I lay down My life—only to take it up again. No one takes it from Me, but I lay it down of My own accord.” It’s imperative to understand that many individuals and groups played a part in the crucifixion of Jesus. However, make no mistake: In the Garden of Gethsemane Jesus agonizingly accepted God’s redemptive plan to “lay down His life and take it up again.” He was, after all, God in the flesh. Nothing and no one could have prevented Jesus’ death on the cross or His resurrection three days later. Yet, over the centuries, people have forgotten this critical truth. And that oversight may have led to centuries of assigning wrongful blame for His death.

We know in biblical history that when Satan entered onto the scene in the creation story, he quickly set about to undermine and destroy God’s plans and purposes. That evil intent evolved when God chose Abraham to father the Jewish generations to convey His words and to send our Savior to be born into a Jewish culture 2,000 years ago. It was God’s intention that, through the covenant with Abraham and his descendants, “all peoples on earth [would] be blessed” (Genesis 22:18). In other words, if God chose the Jewish people to play a central role in His plan to bring redemption to all of humanity, then it would make absolute sense that they would be a primary target for the evil forces at work in our world. One way to explain anti-Semitism: Whatever God loves, Satan hates.

When anti-Semitism marched through later centuries with swords and spears, boots and bombs, with tanks and terror, we expected that the phrase “Never Again” had been permanently stamped into the collective consciousness of Western society. Yet we’re presently confronted with a different and deeply troubling phrase: “Now Again.” It’s not mass imprisonment and genocide in concentration camps. But anti-Semitism, like cancer, can take many forms and is able to spread undetected until it’s too late.

The modern malignancy has been clear for decades among terrorists surrounding Israel in Gaza, Lebanon, and Syria, with Iran’s apocalyptic Imams as their malicious benefactors. Today’s anti-Semitism has spread to the United Nations, college campuses, political parties, activist groups, churches, synagogues, social media, and businesses in the United States, Europe, the Middle East, and many other parts of the world.

The hatred is darkly conceived, whether murder by gunfire, stabbing, or cyberspace plotting. For example, hate-filled hackers broke into a Jewish Zoom meeting and interrupted prayers with their Nazi symbols and ugly slurs. Threatening, defamatory notes are taped to the doors of Jewish students in college dorms. Even in the U.S. Congress, at least two openly anti-Semitic congresswomen were elected to the House of Representatives in 2018. According to the Anti-Defamation League (ADL), in 2019 the United States had the greatest number of anti-Semitic incidents since 1979. Could emphasis on Jesus’ words in John 10:17–18 have derailed the heinous genocide of the Holocaust? What about today’s rapidly growing malignancy?

After Jesus’ death and resurrection, non-Jews embraced Christianity en masse through the Jewish Apostle Paul. When the Romans destroyed the second Temple in 70 A.D., the narrative began veering in another direction. Aided by the passage of time and Constantine, the first Christian Roman Emperor, the Jewish roots wilted. Christianity blossomed when Constantine made it the official state religion of the Roman Empire in 381 A.D. Although Paul’s 30 years and 10,000 miles of travel lit Christianity’s fire for Gentiles roughly 350 years before Constantine, a precursor of already embedded disdain of its Jewishness had crept in. Beginning around 150 A.D., some early church fathers unfortunately laid the groundwork for anti-Jewish sentiments among non-Jews that would later be carried into the Medieval and Renaissance eras.

Centuries later Martin Luther, the foremost pioneer of the Protestant Reformation, exacerbated anti-Semitism with his anger at the Jews for rejecting Jesus. This rigid, unreasonable stance marred his otherwise profound legacy. Luther’s 1523 A.D. pamphlet, “That Jesus Christ Was Born a Jew,” transitioned into the malicious and horrendous book, “On the Jews and Their Lies,” two decades later. In a dreadful manipulation of Christianity’s message, in the 20th century Hitler drew from Martin Luther’s “On the Jews and their Lies” in his propaganda against the Jewish people.

Fueled by an emphasis on misinterpreted New Testament verses about the death of Jesus, it became commonplace to accuse only the Jews for deicide—killing God! Gentile Christian populations pointed deadly fingers of blame at the Jewish people, their religious leaders, and the Jewish disciple, Judas, who betrayed Jesus. Yet the early Jewish believers—responsible for carrying the Gospel to the nations—were eventually martyred for their unwavering faith. They and the Jewishness of Jesus slipped into the background of Gentile thinking, where even today some Christians express surprise to learn that Jesus, His family, and early followers were all Jewish.

The ensuing centuries produced vicious slander, lies, persecution, and death in Jewish communities worldwide. Gentiles gradually decided that God had rejected the Jewish people and that the Christian church had “replaced” them as His chosen people, a theory that eventually became known as “Replacement Theology.” These Gentile churches embraced a doctrine that assumed God had abandoned His ancient, eternal covenants with the Jewish people. Furthermore, in the eyes of non-Jews, the Jews were solely to blame for Jesus’ death—and so they became the evil stepchildren who were ultimately responsible for killing Jesus.

In reading the New Testament accounts, many Gentile Christians lacked the historical and cultural context to read the Gospels more accurately. As a result, they assumed there was no difference between the Jewish leaders who argued with Jesus during His ministry and the Jewish authorities in Jerusalem who wanted Him dead. What’s more, they also presumed that the decision to hand Jesus over to Pontius Pilate, made by the Chief Priests and Sadducees, represented the wishes of the Jewish masses. Consequently, this is how the actions of a few Jewish elites in Jerusalem, who collaborated with Rome and saw Jesus as a threat to their wealth and power, were now transferred indiscriminately to the entire Jewish people.

By blaming only the Jews for Jesus’ crucifixion, many within Gentile churches found themselves on a slippery slope of hatred or judgment of the Jewish people. Moreover, they missed the central message of Jesus’ words about His life in John 10:17–18: “No one takes it from Me, but I lay it down of My own accord.” Today, many pastors and churches still subscribe to Replacement Theology, elevating the status of the church and dismissing the Jewish roots of the Christian faith. In essence, they set aside God’s divine plan of redemption, forgetting the profound debt of gratitude owed to the Jews, God’s chosen people, for our faith. While Satan was at work using every means possible to kill Jesus, it was Jesus who had the power and authority to lay His life down. He was not merely another Jewish victim of Roman brutality; He willingly sacrificed Himself to pay the penalty for all human sin and wrongdoing. Yes, Pontius Pilate, the Romans, the Chief Priests, the Sadducees, and Judas all played a role, but Jesus is the one who chose to give His life. No one could have touched Him had He not made that choice as our Sacrificial Lamb.

Here we are in the 21st century with anti-Semitism on the rise around the world. Is it too late for modern-day Christians to help stem the tide of this hatred? No, because God has given us a second chance to express our commitment to the Jewish people as shown by the warming friendships between our two communities. Thankfully, many Christians over the past decades have recognized the error of Replacement Theology and have acknowledged how often these views have planted the seeds of anti-Semitism within the church. While it’s not possible to change the past, it is possible to impact the future and build bridges of healing with our Jewish brothers and sisters.

Consider taking the following steps. When studying the Bible, become familiar with the Jewish culture and God’s unbreakable covenants with the Jewish people. Rediscover the biblical message, including the message of Jesus, through a Jewish lens. Remember that Jesus, His family, and His early followers were all Jewish. (They read from the Old Testament Scriptures—not the New Testament; they met in synagogues—not churches. Their faith was Judaism, not Christianity.) Make it your goal to understand Jesus and the Gospels within their Jewish context and begin to peel away centuries of baggage that actually reflects Greco-Roman and Western thinking more than it reflects the true biblical message and worldview. Reach out to build friendships with Jewish people in your community. Be sure to do so in love and build relationships without an agenda. Defend Israel where needed and support the valuable projects and initiatives of CBN Israel.

Finally, memorize John 10:17-18. When you hear an anti-Semitic remark, quote the words of Jesus and speak the truth in love. Although Christianity’s divorce from its Jewish roots resulted in overlooking Jesus’ own declaration, let’s make sure to do our part to stand against all forms of anti-Semitism. Defending our Jewish brothers and sisters—and Israel—is an act of love to God.

Pray with us this week with a focus on stemming the tide of global anti-Semitism:

Your ticket for the: Jesus’ Overlooked Statement That Could Have Changed Jewish History

Jesus’ Overlooked Statement That Could Have Changed Jewish History