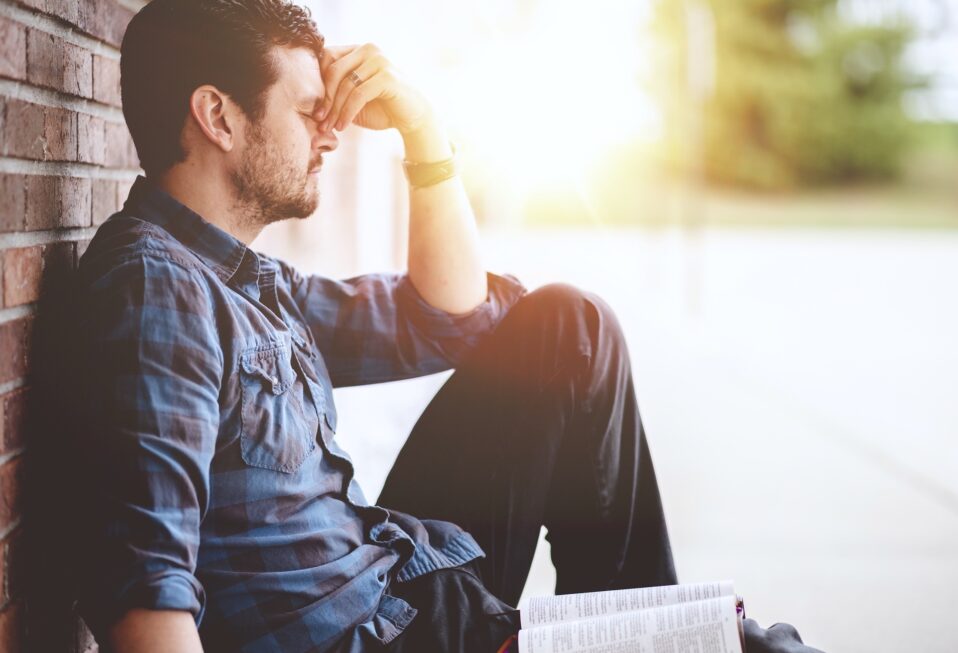 In the portion of the Torah (the Parsha) that we Jews will read in synagogue on Saturday, Jacob is, per Genesis 32:24, “left alone” and spends the night wrestling with a man and/or an angel. The man/angel, bested in the fight, tells Jacob to let him go.

Jacob’s magnificent reply has become, perhaps, the animating idea of Judaism: “I will not let you go unless you bless me.” A Jew, Jacob is teaching us, insists on emerging from a struggle with a blessing.

Where would Jacob have learned this? One might reply, sensibly, that he didn’t learn it from anyone—he just thought of it in the moment. That is possible, but most people do not do their best thinking following an all-night wrestling match where they suffer a lifelong injury.

We are provided with a possible hint earlier when Jacob, in Genesis 32:9, refers to “God of my father Abraham and God of my father Isaac.” Abraham, of course, is Jacob’s grandfather—not at all a synonym or substitute for father. Then why would Jacob call Abraham his father and place him first?

For the same reason, perhaps, that we call a beloved friend “sister” or our parents’ closest friend “uncle.” Jacob looked up to and learned from Abraham like he did his biological father and that made “father” the most appropriate appellation for his grandfather. What would Jacob have internalized from Abraham so deeply that he was able to create one of the most important ideas in human thought at such a moment of physical weakness and exhaustion?

Abraham, we are told in Genesis 24:1, was “coming with his days.” But there is a problem here. Abraham was not always the man we know him as. The tale, all too commonly told, that he smashed his father’s idols and set off on his own is certainly false. Abraham set off on his journey with his father, who died during the journey in Haran. The relationship of Abraham and his father Terah was not one of rebellion. It was the hope of every father: that the son should travel with him and continue going further than he himself was able to.

Still, Abraham left somewhere to go on a “journey.” And journeys, in the Bible and in our life, are never merely physical. Abraham was certainly not always the righteous man he became—and he was, seemingly, at one point very different.

Assuming Abraham spent at least some part of his life as an ordinary guy (or worse), why are we told he was “coming with his days”? The Rebbe Menachem Schneerson, as recounted by his student Rabbi YY Jacobson, gave a magnificent answer. A woman came to him and said that she, though having been born Jewish, spent many years lost to the 1960s—in far-away places, practicing idolatry. She expected the Rebbe to prescribe some long period of fasting or something like that, but he didn’t. He cited Abraham. He told her that just as Abraham was “coming with his days,” so too was she now coming with all of hers. One’s past, the Rebbe interpreted the passage, could be construed as the indispensable preparation for the holy life that one is living now—and is thus an inseparable part of it.

Such a past, then, is not even really the past. It is the beginning—the unlikely beginning, perhaps, but the beginning nevertheless—of the process that led to the person one is today. And the past, therefore, is not something that one should obsess about in guilt and anxiety. It is an indispensable part of the journey.

It was this notion of coming in all of our days that describes one of the most colorful people in Jewish history. Resh Lakish was a gladiator and/or a bandit—literally, probably, a killer—before he became inspired by the great Rabbi Yochanan. Resh Lakish gave up his evil ways and emerged as one of the great Rabbis of the Talmud. Yet that did not mean that he lost a hundred pounds and renounced his physical capabilities. The Jerusalem Talmud tells the story of a Rabbi Imi who was kidnapped in a dangerous area. Rabbi Yochanan said, “Wrap the dead in his shrouds.” But Resh Lakish had a different idea. “Even if I am killed or I kill someone, I will go and I will save him with strength.” Resh Lakish, as the kidnappers found, came to them with all of his days—and rescued Rabbi Imi.

The story of Abraham coming with all of his days, which Jacob seems to have internalized, answers a question from the great 20th-century Rabbi Joseph Soloveichik. Rabbi Soloveichik noted that we are never told what Jacob and the man/angel struggled over. What could this strange absence possibly be teaching us? Perhaps only one thing: that the cause of the struggle, if there was one, doesn’t matter. The important thing is that Jacob struggled.

Jacob, at the conclusion of the night, will have his name changed to Israel—“And you have struggled with man and with God and have prevailed.” We are the people of the struggle—the people who struggle with God, with the state of the world, and with ourselves.

The learning here is counterintuitive. The point of a struggle is not to overcome it and move on through our journey. It is to take from that struggle a blessing, and for the struggle—or at least the blessing in the struggle—to always be a part of us. As the Rebbe described, Abraham is our great forefather precisely because he came with his days. And as the Rebbe applied, the woman who came to him might have appreciated and lived out her Judaism so profoundly because she knew what life was like without it. Without his probably regrettable early days staying with him, at least in some way, Abraham would have been a lesser man. If Resh Lakish had not maintained at least some of his earlier days, his colleague would have been murdered—and we would not have this great story of Jewish strength and pride.

It is by extracting the blessing from the struggle and keeping that part of the struggle with us, that we can come with all our days—and get one step closer to Abraham.

Your ticket for the: Torah Reading Commentary: All His Years? Yes!