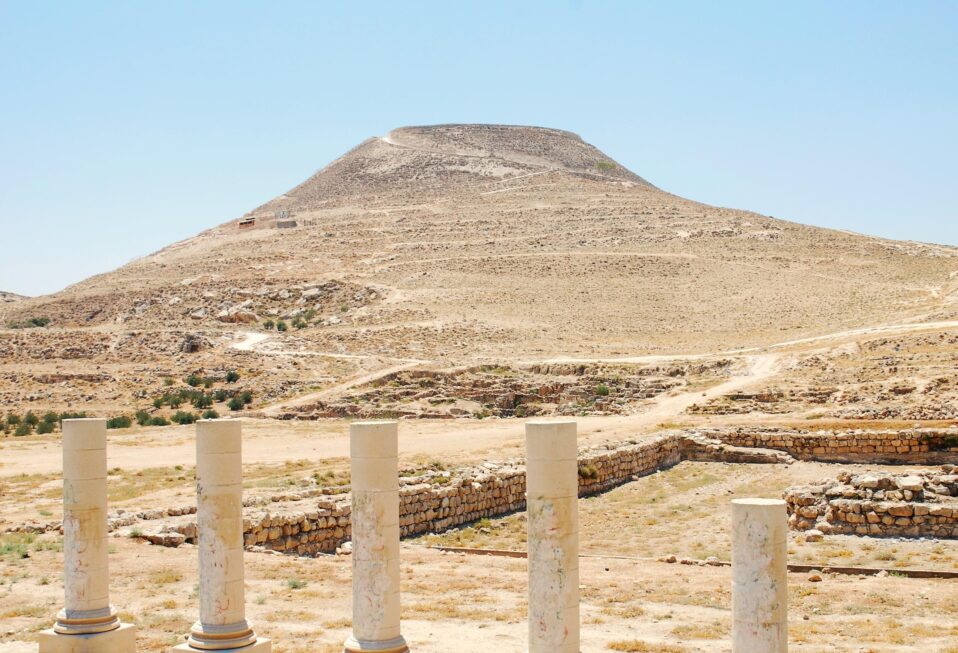 Three miles southeast of Bethlehem sits Herodium, the palace fortress built by Herod the Great (Matthew 2). Overlooking the birthplace of Jesus, Herod’s fortress guarded the eastern roads through the wilderness from Bethlehem to En Gedi. It also served as a reminder of the difficult political situation in which the Jews found themselves within the first century. Herod represented Rome—the pagan empire that exploited the resources of the land of Israel for its benefit.

Herod built the artificial cone shaped hill to commemorate his military victory against the last of the Hasmoneans, Mattithias Antigonus, who was aided by the Parthians. Herod won a skirmish as he fled Jerusalem, and later built Herodium, the palace-fortress he named after himself, on this site. Herodium consists of two complexes: the palace-fortress and the lower palace. The palace-fortress consists of a circular double wall, with four towers (the largest of which faces to the east). Inside the structure, Herod built a private bathhouse, a triclinium (“U” shaped) dining room, reception halls, and living quarters.

Archaeologists have recently uncovered the large entry gate into the palace-fortress. Jewish rebels during the First Jewish Revolt (A.D. 66-73) and the Bar Kochbah Revolt (A.D. 132-136) occupied Herodium. The Jewish rebels of the First Revolt converted the dining room into a synagogue. It was one of the last rebel strongholds to fall to the Romans in the First Revolt. Letters sent to the Jewish garrison at Herodium from the messianic leader of the Bar Kochbah Revolt, Shimon ben Kosiba, were discovered in caves along the shores of the Dead Sea.

Josephus records that Herod the Great was buried at Herodium. After he died in Jericho in 4 B.C., his body was brought to Herodium where it was interred. Archaeologists discovered Herod’s tomb in 2006. They uncovered an ornate mausoleum on the northern side of the conical shaped hill of the palace-fortress. Pieces of Herod’s sarcophagus were also discovered. It had been smashed in antiquity. Excavations next to the tomb uncovered a stairway that led from the bottom of the hill to the entry gate of the palace-fortress, as well as a small theater. The box seating of this theater contained ornate decorations including plaster molding and beautiful frescoes. Herod constructed this theater, most likely, for the visit of Marcus Agrippa, both a close friend of his and of Caesar Augusts (Luke 2).

The lower palace consists primarily of a large bathhouse and pool complex. Roman style bathhouses consisted of four main areas: changing room, cold bath, tepid bath, and a warm/hot room that could either function as a steam room or a dry sauna. The bathhouses at Herod’s palaces had these features. The pool at Herodium was heated as well as the bathhouse.

There is a certain irony that within the shadow of Herodium, the angels proclaimed the good news of the birth of Jesus to the shepherds in the field. Herod’s fortress and monument to himself overlooked the very place where it would be announced that a new king would be born and that he would be Israel’s Messiah. And, it also stood watch when Herod’s soldiers killed the young boys seeking to remove the threat of the child born to Mary and Joseph.

Your ticket for the: Biblical Israel: Herodium