A Jewish Patriot of Colonial America: An Example for Future U.S. Support of Israel 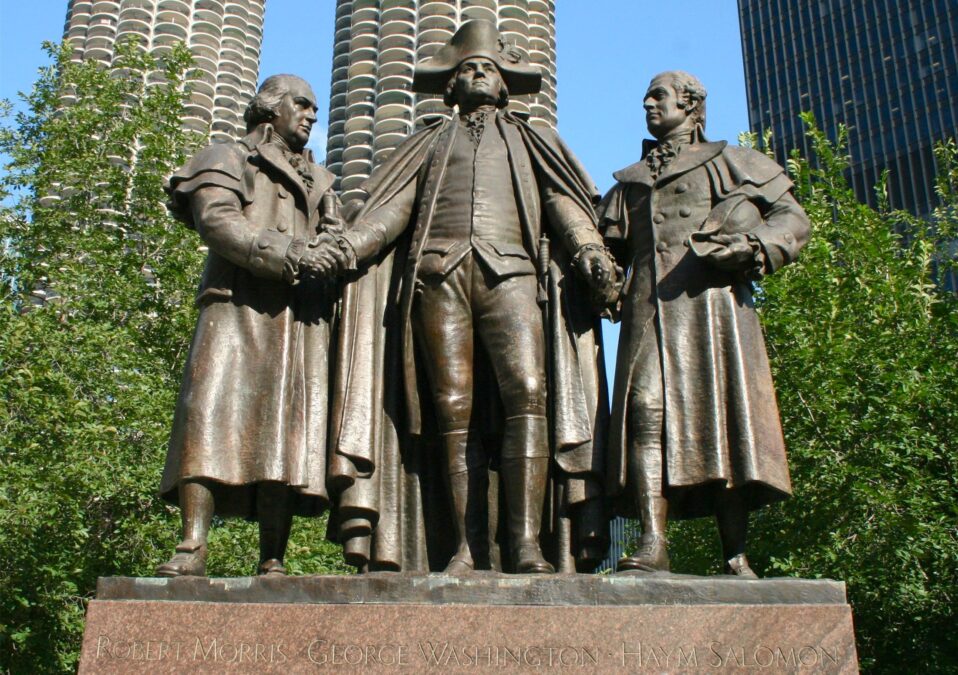 Long before Ellis Island became the gateway to America, Haym Salomon, a Jewish immigrant, fled from the political unrest and violence in his native Poland. He settled in New York in the early 1770s and set up a brokerage business that included foreign securities. To protest the British, Solomon joined the Sons of Liberty (perhaps best known today for their role in the Boston Tea Party) and built relationships with George Washington and other leaders in colonial America. While information about this remarkable man is somewhat limited, it has not stopped the legends about his short life (1740-1785). But one fact is certain: He helped finance America’s Revolutionary War (1775-1783). And his vital assistance to the colonies would prove to be a precursor to modern, reciprocally beneficial connections between the U.S. and Israel.

Salomon’s patriotism led him to spy on behalf of his new homeland. He was arrested several times and later imprisoned. However, since he spoke several languages, the British paroled him; they needed his services as a translator for their German-allied troops. Covertly urging the German mercenaries to desert, Salomon was sentenced to hang, yet escaped to Philadelphia. He joined Mikveh Israel Synagogue—known as the “Synagogue of the American Revolution in Philadelphia”—and rebuilt his successful business. He also married, and his new brother-in-law was a lieutenant colonel on George Washington’s staff.

During the Revolutionary War, the businessman gave varying amounts of money—totaling hundreds of thousands of dollars in today’s money—to the cause. He made loans to such leaders as James Madison and Thomas Jefferson, and his philanthropy was well known.

Salomon’s significance during America’s War of Independence is highlighted in a famous request in 1781. As the story goes, the Continental Army was preparing for the most critical battle of the war in Yorktown, Virginia. After five long years of fighting, food, clothing, and weapons were scarce. Desperately needing money for the war effort, General George Washington sent urgent word to Robert Morris, Director of the Treasury of the Continental Congress.

Morris relayed a message back telling Washington, “We are broke.”

Morris hurriedly went to Salomon’s synagogue even though it was Yom Kippur, Judaism’s holiest day of the year, their day of repentance. One of the synagogue members challenged Salomon’s agreeing to help on this most solemn of days. Salomon’s response was, “It is for the cause.”

Two hundred and forty years have passed since the decisive Battle of Yorktown, where British General Cornwallis surrendered. Yet Haym Salomon has been remembered as an American Jewish hero for many years afterward. In 1939, a major motion picture studio brought out a biopic about Salomon, titled The Sons of Liberty. In its catalog, Warner Brothers described the movie: “The story of the unselfish loyalty and devotion of Haym Salomon (Claude Rains) to General Washington and the fight for freedom in the American Revolution are told in a forceful and rousing way.”

And, although Jews’ contributions are rarely included in students’ history texts, young readers’ “trade books” about American heroes like Patrick Henry and Daniel Boone also include Jewish heroes, and Salomon was certainly included in these.

A 1975 commemorative stamp issued by the U.S. Post Office described Salomon this way: “Financial Hero—businessman and broker Haym Salomon was responsible for raising most of the money needed to finance the American Revolution and later to save the new nation from collapse.”

Mr. Salomon did not live to read the fine letter that George Washington, the general who later became President, wrote in August 1790 to the Jewish community of Newport, Rhode Island. The Jewish patriot would have rightly felt pride in Washington’s 340-word letter.

In part it read, “May the children of the stock of Abraham, who dwell in this land, continue to merit and enjoy the good will of the other inhabitants; while everyone shall sit in safety under his own vine and fig tree, and there shall be none to make him afraid” (the latter portion of the sentence includes a clear reference to Micah 4:4). Washington’s letter also said, “For happily the Government of the United States, which gives to bigotry no sanction, to persecution no assistance requires only that they who live under its protection should demean themselves as good citizens, in giving it on all occasions their effectual support.”

On President’s Day last Monday, I reflected on all that President George Washington had done for his country. Like most Americans, I hold him in the highest esteem. In learning about his respect for the Jewish communities in the colonies and now Haym Salomon, the “financial hero,” I am inspired by both leaders as examples for mutually beneficial ties today. In two different yet essential ways, General Washington’s leadership—and the security aid that Haym Salomon generously provided from his personal wealth—ensured our freedom as a nation.

Today, the United States provides security aid for Israel with a long-standing commitment from the U.S. Congress on both sides of the aisle. It’s a win-win for both nations, with multiple mutual benefits. Also known as foreign aid, generally speaking the monetary issue though can be controversial for some Americans when it comes to multiple countries, whether military or economic aid.

According to polls, Americans believe we spend a whopping 25% of our federal budget on foreign aid—which is completely false. The truth is that total foreign aid comprises only 1% of our federal budget. (Israel receives approximately 0.01% of that.) Some of our foreign aid is problematic, but not when it comes to Israel, especially among millions of pro-Israel American evangelicals. Israel’s Prime Minister, Benjamin Netanyahu, often comments, “Israel will defend itself, by itself.” It’s clear that Israel does not want American boots on the ground. But our security aid—financial aid—is much needed by the only democracy in the Middle East.

For instance, due to Israel’s considerable need for defense, their expenditures are 5.7% of their Gross Domestic Product (GDP). That’s a high percentage, higher than that of any other industrialized country. Our security aid to Israel has increased in keeping with the huge increase in terror attacks against Israel.

Beginning under President Bill Clinton, Congress agreed on a ten-year “Memorandum of Understanding” (MOU) that has continued through the Bush, Obama, and Trump administrations. It may sound excessive, but the first agreement committed to $21.3 billion portioned out over 10 years. Each MOU has seen an increase. In 2016 the new agreement was renegotiated, providing $38 billion from fiscal year 2019 to 2028. Congress re-examines and votes on the MOU each year. The billions do not land in Israeli banks unmonitored. In fact, 75% of the funds stay in the United States, helping to employ Americans in our factories that make military equipment.

The Congressional Research Service annually reports the highly detailed—and closely monitored—financial and accountability measures for our foreign aid to Israel. Their 2020 report notes: “The Trump Administration requested $3.3 billion in FMF [Foreign Military Financing] for Israel and $500 million for missile defense aid to mark the second year of the MOU. The Administration also requested $5 million in Migration and Refugee Assistance humanitarian funding for migrants to Israel.”

For those wondering how the U.S. benefits from such generosity, it’s important for Americans to understand how the security aid we provide Israel helps us, in turn. Israel provides us with significant intelligence sharing, military cooperation and training, counterterrorism knowledge, and our own homeland security. The value of their contributions to our country is impossible to estimate. Nevertheless, it’s safe to say our security aid is worth every penny and more. Our alliance with Israel makes us stronger and safer. Even without American boots on the ground, the benefits protect American lives at home and abroad.

Here are some examples of how this win-win relationship benefits the U.S. First of all, Israel has designed a system to detect underground tunnels. We now collaborate on this system, which we can apply to tunnels at our own southern border. Secondly, Israel’s technology and expertise make our airports more safe and secure. As a world leader in counterterrorism and emergency response, Israel helps train American first-responders and counterterrorism officials. Another benefit relates to direct help for our military serving overseas in that part of the world: the United States has $3.4 billion in weapons and equipment stored in Israel—the War Reserves Stock. If our troops need those supplies, they can quickly get them. The Israel Defense Forces (IDF) may also access this stockpile in an emergency, U.S. authorization permitting.

As mentioned earlier, foreign aid is another way to support Israel—a tangible expression that saves Israeli lives and protects our own citizens. Foreign aid decisions begin in the U.S. House Appropriations Committee, the birthplace of foreign aid in general. In the 117th Congress, the committee has 33 Democrats and 26 Republicans. Both Jews and Christians—and now one Muslim—discuss and make the decisions. When it comes to Israel, the committee has a track record of support from both Democrats and Republicans.

Join CBN Israel this week in our prayers to thank God and the majority of the U.S. Congress for their historic, consistent security aid to Israel:

As we pray with and for Israel this week, let’s remember that Christians in the U.S. have a critical role to play in supporting the modern State of Israel—not only our prayers, but through our financial support and our vigilance in detecting signs of anti-Semitism and calling them out.

Perhaps nothing could speak to this mutually beneficial relationship more eloquently than the bronze sculpture titled “The Great Triumvirate of Patriots ” that stands in Chicago’s Heald Square. Dedicated in 1941, the 11-foot-tall statue features three leaders standing hand in hand: General George Washington, Robert Morris, and Haym Salomon. Flanking General Washington, Morris and Salomon are described on a plaque as “the two principal financers of the American Revolution.” In light of Haym Salomon’s support of the American colonies—helping us shake off the British yoke and forge a strong nation—let us look forward to our continued help and support of Israel in the years ahead.

Your ticket for the: A Jewish Patriot of Colonial America: An Example for Future U.S. Support of Israel

A Jewish Patriot of Colonial America: An Example for Future U.S. Support of Israel