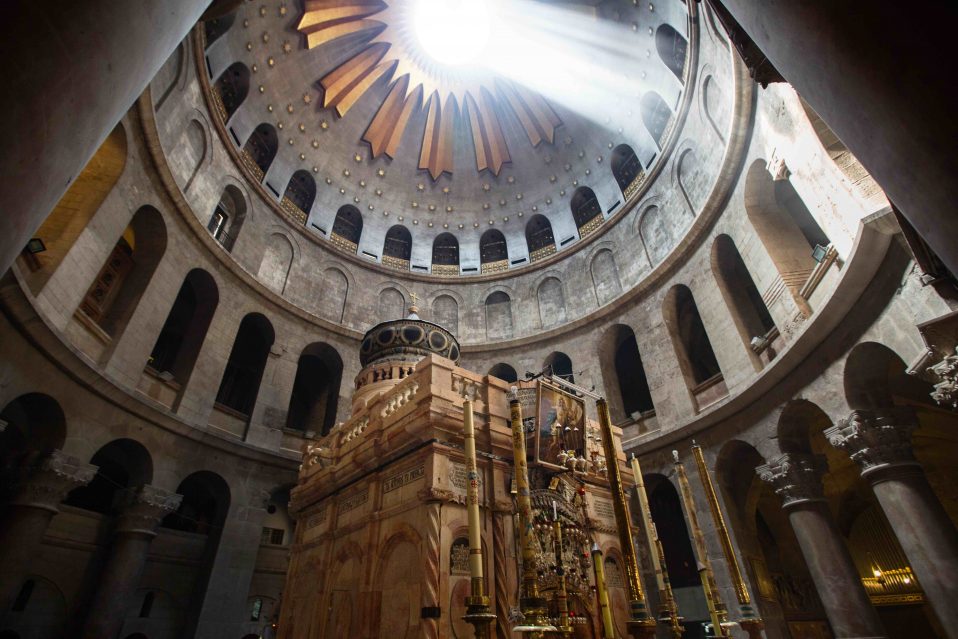 The traditional location of the crucifixion and resurrection of Jesus is the Church of the Holy Sepulchre, which sits within the heart of the Christian Quarter of the Old City of Jerusalem. The origin of the church goes back to the Emperor Constantine. His mother, the Empress Helena, was shown this location by local Christians on a visit to the Holy Land (326 A.D.). They identified it as the place where Jesus’ crucifixion and burial took place. Upon that site, her son built the first church, which was called the Church of the Resurrection.

Archaeological excavations within the church have uncovered the history of the site. In the 8th-7th centuries B.C., the location of the Holy Sepulchre was a large limestone quarry to the northwest of the walled city of Jerusalem. According to the excavator, the site continued to be used as a quarry until the first century B.C. when it was filled in with soil and stone flakes from the quarry. The site at this time became a garden or orchard that contained fig, carob, and olive trees. At the same time, it developed into a cemetery. Within the complex of the Holy Sepulchre, tombs dating to the first century have been discovered.

In addition to the kokhim tomb, arcosolia tombs began to appear sporadically during the first century. The arcosolia is a bench-like aperture with an arched ceiling hewn into the length of the wall. This style of burial was more expensive since only three burial places existed within a tomb chamber instead of six or nine, as typically found within kokhim tombs. Approximately 130 arcosolia tombs have been discovered in Jerusalem and over half of them also contain kokhim. Ossuaries (bone boxes) could be placed on the arcosolia benches within the tombs.

The Roman Emperor Hadrian built on top of the quarry-garden-cemetery a raised platform with another platform on it where he built a temple to Venus/Aphrodite in the second century. This pagan temple was removed when Constantine built his church.

Constantine built a rotunda around Jesus’ tomb. The rock of Golgotha was exposed to the open air in a garden, and on the other side of the garden, he built a basilica church.

The question arises whether or not the Holy Sepulchre contains the location of Jesus’ tomb. What we can say is this: 1) The site was a cemetery in the first century with first century tombs. 2) From the second century until the arrival of the Empress Helena, the actual tomb had been covered for 300 years. The fact that the local Christian memory remembered this location, where a first century cemetery existed, even though it was covered by the Hadrianic temple strongly suggests the authenticity of the site. 3) When Helena was shown this site, it sat like now within the walled, urban city of Jerusalem, which would have seemed strange to ancient pilgrims as it does to modern.

Yet, the memory of the local Christian community remembered that this location once lay outside of the walls of Jerusalem. Ten to fifteen years after Jesus’ death and burial a wall was built in Jerusalem that enclosed this area into the city.

Pilgrims to Jerusalem often wonder if the Holy Sepulchre marks the site of Jesus’ crucifixion and resurrection. The archaeology and tradition of the site support its claims.

Your ticket for the: Biblical Israel: Church of the Holy Sepulchre