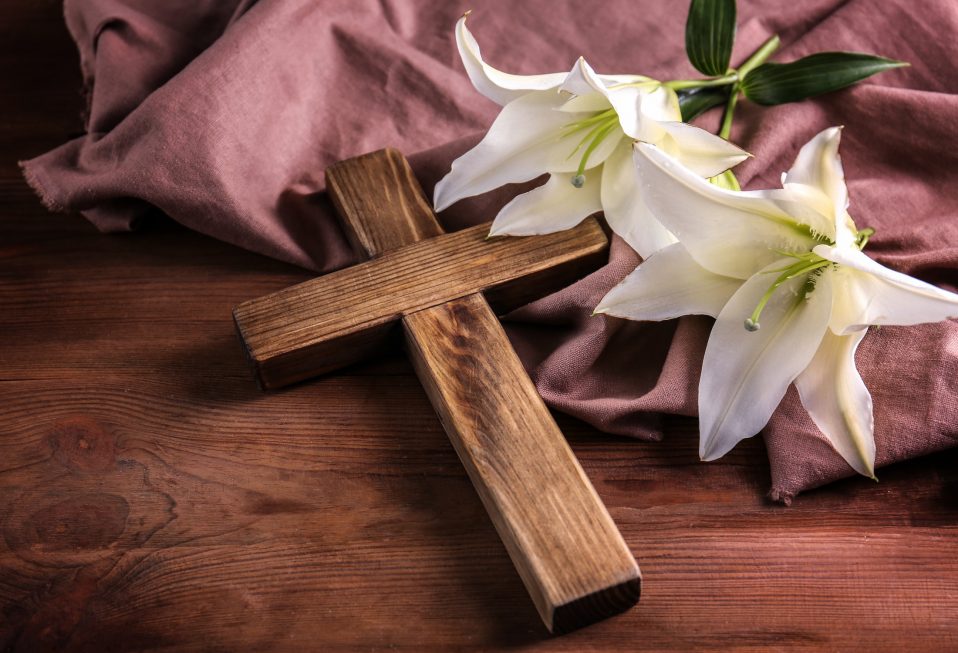 Holy Week took on a new dimension for me on Palm Sunday night. My husband and I attended a Turner Classic Movies Fathom event on the big screen. The epic movie The Ten Commandments was shown as a tribute on its 65th anniversary. Stunning in every way, the movie had two scenes—the engraving of the Ten Commandments and the Red Sea parting—that were especially breathtaking. Seeing the nearly four-hour-long film took us back to the first Passover. One of the scenes showed Moses, brilliantly portrayed by Charlton Heston, at a simple meal in a quite simple dwelling. The tenth plague’s Angel of Death was sweeping over Egypt while the lifesaving lamb’s blood covered the Israelites’ doorposts. This symbolized the Perfect Lamb’s blood sacrificially shed on the tree approximately 1,000 years later outside Jerusalem.

Passover (March 27-April 4), Holy Week, and Easter are in full swing for both Jews and Christians worldwide. Watching The Ten Commandments reminded me that on too many occasions Passover—the Jewish Festival of Freedom—has taken place in dangerous circumstances during Holy Week over the centuries.

Examples of persecution far exceed the word count here. The 20th-century Holocaust stands alone in Jewish history, the genocide of 6 million Jewish men, women, and children. Yet a glimpse into the Middle Ages shows us how difficult that period was for Jews in dispersion. Christian Holy Week and Good Friday left their shattering marks in history—and eventually transgressed into the evildoings of the Nazi regime.

Biblical New Testament history, though, sets the stage for the facts about Christianity’s early development. Jesus, our Jewish Rabbi, recruited His Jewish disciples and commissioned them to go throughout the then-known world. They shared the Good News about His redeeming sacrificial love expressed on the cross, His resurrection leading to new life, and our eternal citizenship in Heaven.

Later, God transformed the life of the former murderer, Saul, and renamed him Paul. The apostle became the Jewish point person to share the Gospel with the Gentiles in his world travels and inspired, brilliant writing.

Then, in the fifth to the 15th centuries, non-Jews extensively established their churches and moved away from Jewish culture. Anti-Semitism began inching its way into their thinking and practices. The medieval era produced the Renaissance and the Age of Discovery, positively revolutionizing society. Nevertheless, the injustices and persecution of Jewish communities in dispersion throughout Europe redoubled. Even their famous paintings often portrayed Jesus as “white,” neglecting His Middle Eastern Jewish ethnicity.

Some medieval churches rightly recognized the Jewish scribes who gave us God’s word under the inspiration of the Holy Spirit. They enacted laws to protect their Jewish communities during Holy Week, but it meant that Jews were forced to stay inside—especially on Good Friday. Yet violence still seeped in on the local level among lay people, along with far too many pastors and priests—in violation of church rules.

It is easy to imagine that Christian Holy Weeks occurring near or on Passover weeks resulted in Passovers that were more muted and curtailed. Fear accompanied the freedom that Passovers celebrated. Although in various locales civil leaders occasionally set armed guards outside synagogues to protect worshipers, fear still tinged the atmosphere.

In some European countries, Jews were required to wear distinctive clothing—a particular hat for men, a blue-striped scarf for women—or yellow stars, a forerunner of the yellow Star of David that was compulsory under the Nazis. Discrimination reigned against Jews, barring them from certain professions or serving in the military. In some nations Jews were forced into ghettos, which remained a practice throughout the Nazi terrors.

One of the worst lies, which emerged in the 12th century, was called the “blood libel.” This occurred especially during Passover preparations, where the Jewish community was accused of killing Gentile children to obtain their blood for unleavened bread—the matzo that we are familiar with today. This accusation is outrageous in every way.

I view blood libel as one of the worst lies, not only for the Jewish community so directly assaulted but for us Christians, as well. It desecrates the precious, redemptive shed blood of Jesus on the cross. Blood libel was a favorite tool of Nazi propaganda to lull non-Jews into apathy or incite them to hatred. Blood libel accusations still rear their evil heads today and take other modern forms, such as accusing Israelis of poisoning the waters that flow into Palestinian areas.

Holy Week and Good Friday clearly were not good for Jewish Passovers. Certain liturgies and biblical passages were emphasized, laying the total blame for Jesus’ crucifixion on the Jews. Some chants, known as “the Reproaches,” included a “voice of God” blaming Jews for rejecting Jesus. The medieval church in general neglected Jesus’ Jewishness—as they did His many Jewish followers who carried the Gospel to the world. Although Judaism literally rocked the cradle of Christianity, the disconnect between Christianity and Judaism during the Middle Ages grew even deeper.

In the 16th century, Martin Luther, the rightly venerated leader of the Protestant Reformation, did an about-face regarding the Chosen People. His kindly 1523 pamphlet, That Jesus Christ Was Born a Jew, transitioned two decades later into the malicious and horrendous book, On the Jews and Their Lies. In a dreadful manipulation of Christianity’s message, Hitler drew from On the Jews and Their Lies in his propaganda against the Jewish people leading up to the Holocaust.

In the 20th century, Christians and Jews began entering a different era when the Catholic Church decided it was wrong to accuse the Jews of deicide—killing God. They enshrined this landmark decision in their 1965 document, Nostra Aetate (“In Our Times”). They also recognized that Christianity came from Judaism and stated that the Church “decries hatred, persecutions, displays of anti-Semitism, directed against Jews at any time and by anyone.” The Lutheran denomination also examined its history and hearts, declaring in its German branch, “We state clearly that through omission and silence, we too have become guilty before the Merciful God of the outrage perpetrated against the Jews by members of our [German] people.”

Thankfully, in the last few decades the relationships between the Jewish and Christian communities have intensified into a closeness that is unmatched. It is as if God has given us Christians a second chance to enact strong relationships between our two communities after centuries of sorrows, slanders, and violence. Yet today anti-Semitism, a term first used in the 19th century, is also intensifying.

One of the most devastating mistakes in the church’s breakaway centuries ago from our Lord’s Jewishness, His culture, and the Jewish Scriptures is the omission of what I consider a significant Scripture in the New Testament. In John 10:17-18, Jesus declares, “The reason my Father loves me is that I lay down my life—only to take it up again. No one takes it from me, but I lay it down of my own accord. I have authority to lay it down and authority to take it up again. This command I received from my Father.”

In reading only New Testament accounts, many Christians lacked the historical and cultural context to read the Gospels more accurately. As a result, they assumed there was no difference between the Jewish leaders who argued with Jesus and the Jewish authorities in Jerusalem who wanted Him dead. They also presumed that handing Jesus over to Pontius Pilate, a demand made by the Chief Priests and Sadducees, represented the wishes of the Jewish masses. Consequently, this is how the actions of a few Jewish elites in Jerusalem, who collaborated with Rome and saw Jesus as a threat to their wealth and power, were now transferred indiscriminately to the entire Jewish people. By blaming only the Jews for Jesus’ crucifixion, many churches found themselves on the slippery slope of hatred or judgment. Moreover, they missed the crucial words Jesus articulated in John 10:17-18.

Today, many pastors and churches still subscribe to Replacement Theology, which elevates the status of the church and mostly disregards the Jewish roots of the Christian faith and God’s eternal covenants. In essence, they set aside God’s divine plan of redemption, forgetting the profound debt of gratitude owed to the Jews, God’s chosen people, for our faith.

While Satan was at work using every means possible to kill Jesus, it was Jesus who had the power and authority to lay His life down. He was not merely another Jewish victim of Roman brutality; He willingly sacrificed Himself to pay the penalty for all human sin and wrongdoing. No one could have touched Him had He not made that choice to follow His Father’s redemptive plan in the Garden of Gethsemane.

During our 2021 Holy Week, I encourage our Christian community to memorize John 10:17-18. I was so inspired to see The Ten Commandments. Once again I was reminded that we can play a small part as 21st century Christians to promote freedom from the oppression of anti-Semitism for our Jewish friends. We can use the scriptural tool, a direct quote from Jesus, the Ultimate Expert on God’s redemptive plan. We can be the ones to advance Jesus’ own corrective definition of His sacrifice. No one on earth, in ancient or modern times, can reverse the truths of rightly emphasized Scripture straight from God’s beloved Son!

Perhaps another of the greatest remedies in church history and now today is to embrace the fact that God’s plan included grafting Christian branches onto the Jewish olive tree. In Romans 11:17-20 the Apostle Paul wrote,“ If some of the branches have been broken off, and you, though a wild olive shoot, have been grafted in among the others and now share in the nourishing sap from the olive root, do not consider yourself to be superior to those other branches. If you do, consider this: You do not support the root, but the root supports you. You will say then, ‘Branches were broken off so that I could be grafted in.’ Granted. But they were broken off because of unbelief, and you stand by faith. Do not be arrogant, but tremble.”

Christian arrogance has fueled misunderstanding over the centuries that has led to much, if not all, of the persecution that has taken place. Through our Jewish Lord Jesus, we are chosen too!

Join CBN Israel during Holy Week to pray for Israel and the Jewish people:

Let us remember 1 Corinthians 5:7—“Christ our Passover Lamb has been sacrificed for us. Therefore let us keep the festival.” He is risen! He is risen indeed!

Your ticket for the: Holy Week and Passover: Centuries-Old Persecution of Jews