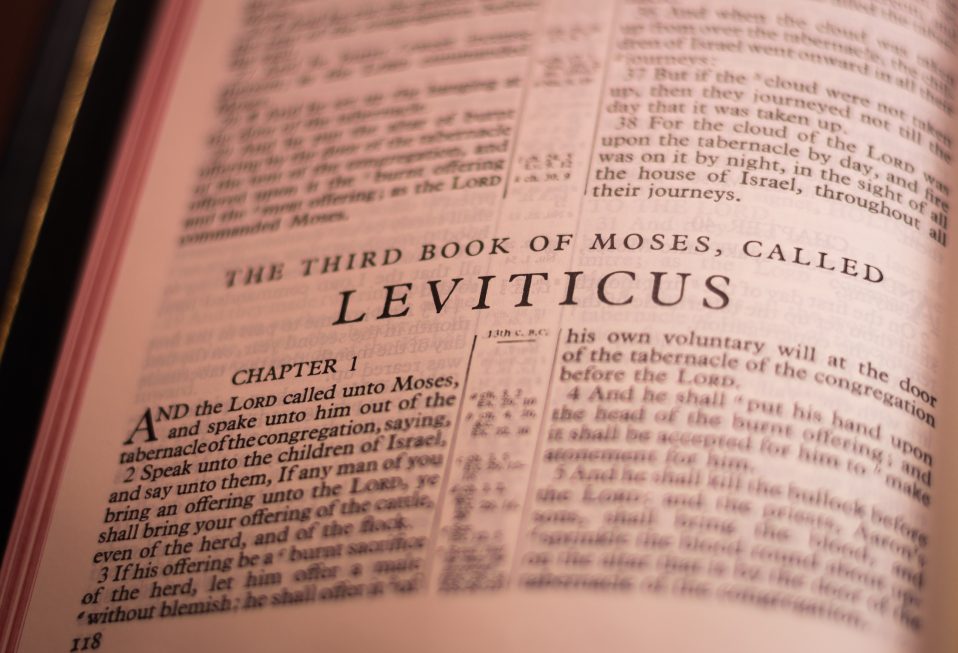 In synagogues everywhere this month, we started the third book of the Torah—Vayikra (or Leviticus). Leviticus does not have the deeply engrossing family drama of Genesis, the liberation narrative of Exodus, the moral stories of Numbers, or the magisterial summing up of Deuteronomy. In fact, it is mainly about sacrifices that have not happened in thousands of years. And yet, like everything else in the Torah, it is laden with the most instructive, interesting, practical, and actionable life lessons.

Indeed, there is a Jewish custom to begin the religious education of a child not with the story of creation, the story of the Exodus, or the grand sweep of Moses’ summation—but with Leviticus. Why? As with so much else, there are multiple interpretations—each of which can be true.

One is that children are pure, and the book of Leviticus is about purity.

Another is that we begin Jewish education by teaching about sacrifice and, especially, the indispensability of sacrificing. Sacrifice is necessary for the development of any kind of meaningful relationship, building project, or moral commitment. And so it is here—even before the great stories and lessons that began to define us as Jews—that we begin the great task of Jewish education.

Having established the importance of sacrifices, we ask: What, fundamentally, are sacrifices? The answer is revealed by the fact that the Hebrew term for sacrifice, korban, has the same root as the word lhitkarev—which means to draw close. Lhitkarev is, importantly, a reflexive verb. A reflexive verb is something that we do to ourselves. For instance: She washed her hands. Similarly, the word to pray, l’hitpalel, is also a reflexive verb, which is fitting because prayer replaced animal sacrifice in the Jewish tradition.

Second question: What is it supposed to do? It is supposed to “draw us close” to God. In this, we learn the key to forming strong human relationships and, quite possibly, the secret of love. How do we get close to God? One indispensable way is described through Leviticus: by sacrificing. The sacrifice could be money or time, a relationship or a habit, or even by risking one’s life.

How, then, can we get close to other people? The first thing that God tells us about other people is that they (we) are created in His image. Thus, the way to get close to other people is sacrifice, along with the other person, for a goal that both people agree is sacred. That is why the term “band of brothers” is so evocative and so true, as it describes a group of people forever bound together by the sacrifices they made for their country and the ideals for which it stands.

And sacrifice is also the context for the first time that the term “love” appears in the Bible. Love does not make its debut in a romantic context, but rather in a parental context—and long before Leviticus. It debuts when God tells Abraham to “sacrifice” his son Isaac (“the one you love”). Love, the ultimate “drawing close,” comes with sacrifice. Perhaps this is why the greatest love in the world, that of a parent for his or her child, is inexorably tied up in sacrifice. Each time a woman carries a child, she is making a huge sacrifice, at least of her physical comfort, and is quite possibly risking her life. And every father is, or at least should be, more than willing to do anything—to sacrifice anything—for his child.

Acts of sacrifice always involve one thing: giving. Again, the Hebrew language enables us to understand the nature of its word. The word for “give” is natan. And natan is a palindrome—it reads the same each way—in Hebrew as when transliterated in English. Giving is not a one-way experience. It goes around, and it enables us to draw close to others, and, in so doing, ultimately to God.

Therein, perhaps, lies the paradox of sacrifice. If we genuinely sacrifice as the Torah imagined, what do we “give” up? Nothing—if giving is defined, as it generally is, as an act that is followed by having less of whatever we gave. For instance, if I have $300 and I hand it to the store owner in exchange for a bike, I now have fewer dollars. What did I give? Three hundred dollars. But what did I sacrifice? Nothing. I have exchanged.

How about if I have $300 and give it to fund a fistula surgery at a Christian hospital in Uganda on Watsi? I have sacrificed $300, but I have received the feeling that I am responsible for a woman being able to live with health, dignity and vitality, along with all of the positive effects on those in her family and community. So what did I take?

All I have to do is a calculation that I do all day every day—price something in dollars. Such a feeling is worth, by any measure, more than $300. So, by giving and sacrificing $300, I have taken—I have received—a lot more than that.

No wonder sacrificing is, perhaps, the best deal of all—and why it might be more intuitive than it seems to start a lifetime of education with instruction in it and its great book, Leviticus.

Your ticket for the: Torah Reading Commentary: Sacrifice