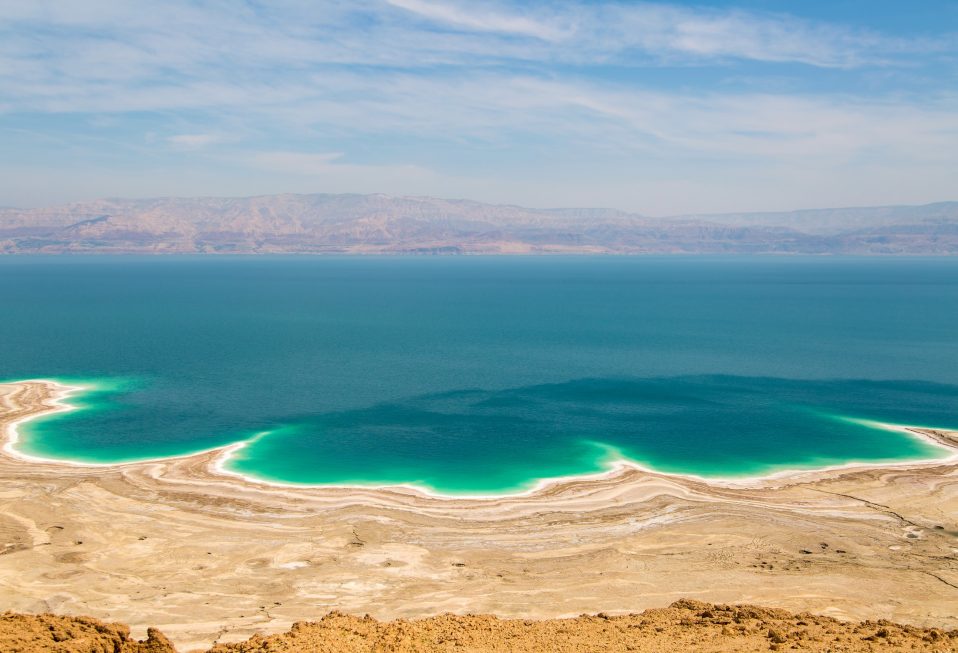 The Jordan River flows into the Dead Sea, the lowest place on earth, at 1,300 feet below sea level. It formerly received six million tons of water daily from the Jordan River. It forms part of the Rift Valley. It is forty-three miles long and nine miles wide. It is deepest on its northern end, at 1,310 feet deep.

The Bible never refers to it as the Dead Sea; rather, it uses names like the Salt Sea (Genesis 14:3; Numbers 34:12), the Sea of Arabah (Deuteronomy 3:17; Joshua 3:16; 2 Kings 14:25), and the sea of foul waters (Ezekiel 47:8). The first century Jewish historian refers to it as Lake Asphaltitis (Antiquities 1:174). By the latter half of the second century A.D., Greco-Roman writers began referring to the body of water as the Dead Sea.

Its biblical name, the Salt Sea, derives from the salt-mineral concentration within the water of about 30% (most oceans are about 3% for comparison). The density of the water enables modern tourists to float, and it also means that the water remains relatively calm. In antiquity, the sea was valued for its salt, a valued commodity in the ancient world, and the bitumen found floating on its surface.

The saltiness of the water, as well as the salt flats around the Dead Sea, give the name, the Valley of Salt, to the land south of the Dead Sea in the Bible (2 Kings 14:7). While the waters of the Dead Sea are too salty for normal life to live, fresh-water springs and oases, like En Gedi and En Feshkah, enabled the growth of vegetation, trees, like date palms and balsam, and agriculture in the region of the Dead Sea.

The Dead Sea divides into two parts. The boot-shaped peninsula that extends into the water from its eastern bank divides it between its northern part, approximately thirty miles long, and the southern part, about fifteen miles long, but it is only thirty to thirty-five feet deep in this area.

The cities of Sodom and Gomorrah (Genesis 14:1-12) resided near the shore of the Dead Sea. Biblical writers, especially the prophets, often used the imagery of the barren, arid, and salty landscape around the Dead Sea to communicate their messages. Isaiah (35) and Ezekiel (47) envision a day when the salty water of the sea will become fresh and sweet, and only the salt flats on its shores remain.

Your ticket for the: Biblical Israel: Dead Sea