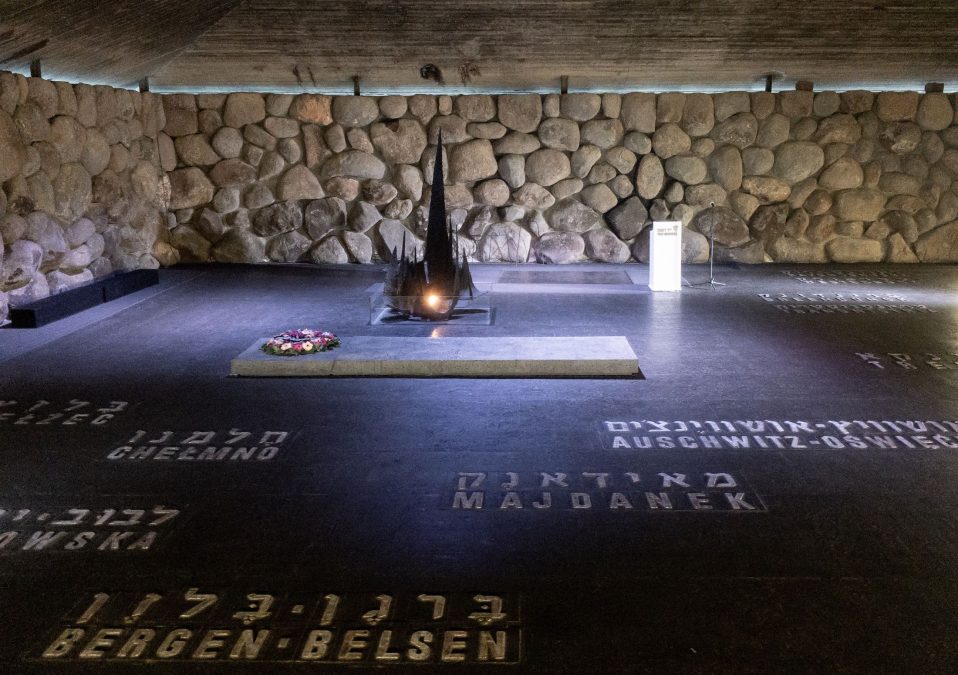 “If we wish to live and to bequeath life to our offspring, if we believe that we are to pave the way to the future, then we must first of all not forget.”

Sirens sounded in Israel this morning at 10 o’clock, Israeli time. For two minutes cars stopped on the highways. Drivers stepped out and stood in silence. Crowds walking on sidewalks immediately stopped in their tracks. The nation paused together in silence and stillness as it remembers 6 million Jewish men, women, and children who died in the Holocaust. It is Israel’s annual Holocaust Martyrs’ and Heroes’ Remembrance Day, also called Holocaust Remembrance Day (Hebrew: Yom HaShoah).

On one of my many trips to Israel, I experienced several Yom HaShoah remembrances that made a deeper imprint on my observation of a living grief that still permeates the vibrant Jewish culture. In 2012, my husband and I vacationed for a few days after one of my professional assignments with the American Israel Public Affairs Committee (AIPAC). We had just left Independence Hall, where Israel’s first prime minister, David Ben-Gurion, read the Declaration of Independence on May 14, 1948, to a crowd that broke out into singing and dancing in the streets. The morning siren went off as we strolled down a Tel Aviv sidewalk. We stopped, aware of the memorial day. As we stood, still and silent, everyone within our view in the streets, sidewalks, and stores was doing the same. Israel was at a standstill. The two-minute pause felt solemn.

In 1953 the Knesset, Israel’s parliament, instituted Yom HaShoah five years after the rebirth of the modern Jewish state. The word “Holocaust” is derived from the Greek word for “sacrifice by fire.” And indeed, the meaning is terribly true. In 1933 Europe, the Jewish population numbered 9.5 million. After the Holocaust, the stunning loss of life resulted in a vastly reduced population: 3.5 million. Hitler and the Nazis had found a way to carry out genocide on an industrial scale, killing 6 million Jewish men, women, and children. The Nazis put into operation one of the most horrific death machines ever used in order to reach its satanic “Final Solution.”

It is impossible to even estimate what the monstrous Hitler and his evil accomplices stole not only from generations of Jewish families but also from our world. We will never know the sum of contributions lost, especially from the 1.5 million children who were murdered. The lives of future musicians, artists, educators, innovators, doctors, rabbis, and scientists were snuffed out. Their abilities to bless our world died with them.

Given the unquestionable facts, it is shocking that anti-Semitism is rising again. “Never Again,” the watchword after the Holocaust, is now morphing into “Now Again” in the United States and other nations. It’s consistently “Now Again” in the United Nations, in the International Criminal Court, and from Iran’s leaders. It cannot be ignored. Some deniers even go so far as to say the Holocaust didn’t happen. We can thank General Dwight D. Eisenhower—who later became our 34th president—for having the foresight to bring a photographer to codify evidence of the horrors when the American forces liberated the prisoners from the concentration camps. Because these photographs are evidence, the outrageous lies that the Holocaust didn’t happen were proved to be just that: lies. Eisenhower himself said the photographs were necessary so that no one could dismiss or disbelieve the terrors that took place in the camps.

Israeli remembrances take many forms, whether in the schools or synagogues or at official ceremonies. In the United States and other nations, Holocaust remembrances will be held. Thankfully, as anti-Semitism rises, awareness and support are also expanding, in large part due to Yad Vashem, the World Holocaust Remembrance Center. Here, they oversee commemorating, documenting, researching, and educating about the Holocaust. Sitting on 45 acres atop Jerusalem’s Mount of Remembrance, the Center includes museums, monuments, educational facilities, and a Children’s Memorial. It also honors the Righteous Among the Nations, courageous souls who risked their lives to rescue Jews during the Holocaust.

Yad Vashem rests its purpose on Isaiah 56:5—“To them I will give within my temple and its walls a memorial and a name better than sons and daughters; I will give them an everlasting name that will endure forever.”

Visiting Yad Vashem should be included in every itinerary. The education the exhibits provide and the facts behind them bolster our ability to oppose anti-Semitism. In 2021, it’s more important than ever to keep the facts in our minds and hearts so that we are better equipped to fight the hatred.

Let’s return to 2012 and that year’s American Israel Education Foundation trip (affiliated with AIPAC). I had recruited a group of 15 Christian leaders and then staffed the trip. We were invited as VIPs to the Jewish state’s official remembrance. Among many sobering parts of the program, six Holocaust survivors were invited to light six torches positioned on the stage. The large torches represented 6 million Jews put to death. Each survivor’s story appeared on film during the moving ceremony. And each year, six other survivors are chosen to light the torches.

One of the notables who spoke during the event was Shimon Peres, then president of Israel. He made this observation about the Israeli people: “We have gathered unusual capacities which emerged from the depths of the Holocaust and from the peaks of our legacy. We have a commitment towards the betterment of the world and respect for humanity. The strengths of our nation are concealed in its history and contained in the souls of its sons. We used to be a question mark, now we are a strong country.”

Being seated among Israeli citizens was an honor for all of us. Although non-Jews are unable to fully comprehend the grief and sense of loss about the Holocaust, our knowledge and relationships with the Jewish community can serve to motivate Christians to do good. “My Brother’s Keeper” was the theme of the ceremony the year we attended, and the event resulted in an outstanding project for one of our participants.

Mark Jenkins, a media pastor in Richmond, Virginia, felt compelled to return to Israel every year for this state ceremony honoring the heroes and martyrs of the Holocaust. Until COVID-19 hit, he filmed each year’s ceremony, edited it, and had the Hebrew translated into English. The ceremony is now shown every year on National Religious Broadcasters media outlets and is broadcast in Finland, the United Kingdom, Germany, Canada, the U.S., India, Indonesia, and Taiwan (which transmits into China). Correspondence also comes in from 90 other media and civic organizations as far away as Australia and Argentina. You may view it at www.anationremembers.org.

Another example of Christians elevating Holocaust Remembrance is the artistry of Pat Mercer Hutchens (1937-2014). Mrs. Hutchens based her oil paintings on black-and-white photographs from the Auschwitz Album, a 56-page album containing the only surviving photographic evidence of the extermination process from inside a concentration camp. The album documents the arrival of Hungarian Jews in the early summer of 1944 with photos of thousands of Jews disembarking on the train ramp. On their coats are the infamous yellow stars. The photographers were most likely SS officers tasked with taking photo IDs of inmates, yet that would be unusual because the Nazis were careful to keep the “Final Solution” a secret.

When the artist first saw the black-and-white photographs, she began having nightmares and dreamed about how she could rescue children dying around her. When she awoke, she felt compelled to paint their images—in color—to preserve their memory and mark their last breath. The album’s nearly 200 photos can be viewed in Yad Vashem’s archives and on their website. Mrs. Hutchens chose 40 photos to paint. All are now featured in book form, The Auschwitz Album Revisited, and are available for sale at thejerusalemconnection.us. Even after a diagnosis of cancer, Mrs. Hutchens kept painting until she completed 40 portraits that, color aside, were identical to the black-and-white photos. A permanent exhibit is on display at the Liberty University campus in Lynchburg, Virginia.

The DNA of the Holocaust remains in Jewish minds and hearts because of the great loss of life and all that was taken away. Despite the past, though, the Jewish community worldwide—and specifically Israelis—have determined to build a culture of life and innovation. Interestingly, in the World Happiness Report of countries, Israel ranks 14th, and among cities, Tel Aviv ranks as the world’s eighth happiest. Israelis exhibit a type of fortitude that has propelled them to draw life out of death—a remarkable example for all of us.

On this day of Yom HaShoah, I hope the Christian community will take a few moments of silence and stillness asking the Lord how we can contribute to standing against the growing anti-Semitism across the world. Our Jewish friends need us again and we need to stand up in far greater numbers.

Join CBN Israel in praying for the Jewish nation as they remember the Holocaust:

As Professor Ben Zion Dinur, a former president of Yad Vashem, said in 1956: “If we wish to live and to bequeath life to our offspring … then we must first of all not forget.” Let us keep Yom HaShoah, the nation of Israel, and Jews everywhere in our hearts on this Day of Remembrance.

Your ticket for the: Yom HaShoah: Israel Stops and Remembers