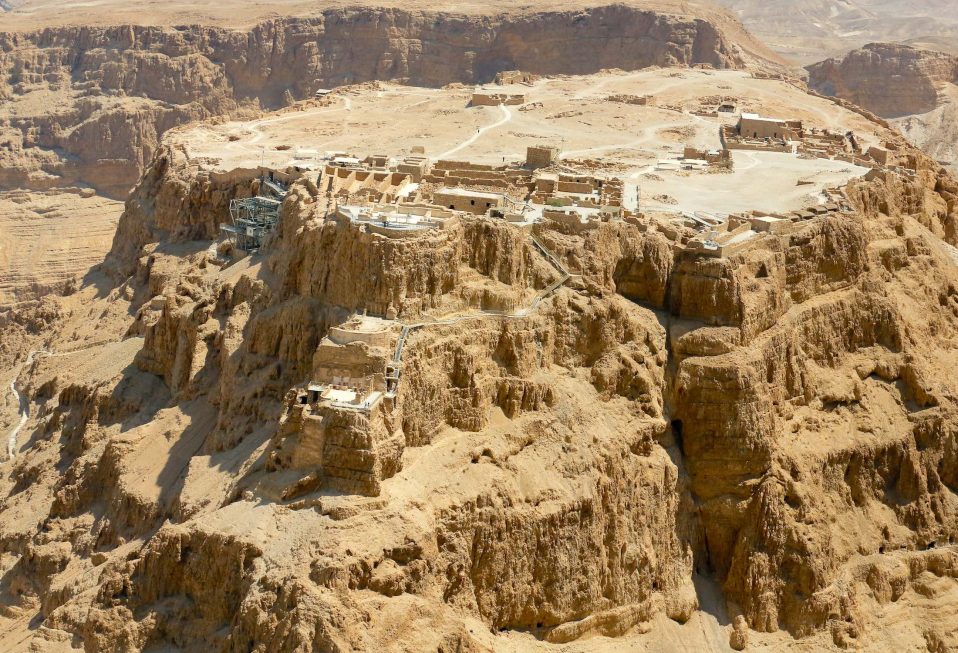 Masada, a palace-fortress built by Herod the Great (Matthew 2), sits on the south-western shore of the Dead Sea, fifteen and a half miles south of Ein Gedi. The fortress sits atop an isolated rock plateau that overlooks the Dead Sea Valley below. This naturally fortified rock was first built on by the Hasmonean king Alexander Jannaeus (ruled from 103-76 B.C.). Herod the Great made it into a palace fortress that could provide protection if he needed to flee Jerusalem, as well as protecting the balsam industry at Ein Gedi, which provided the cash crop for Herod’s kingdom.

Herod built two palace complexes on top of Masada, one on the western side (the oldest), and one on the north, which boasted three levels cascading down the northern slope of the rock scarp. Both had functioning Roman style baths, living quarters, storerooms, and decorations fitting for a king. Herod also had a pool on top of Masada, as well as gardens.

Masada receives on average only an inch to an inch and a half of rainfall annually. The need for water of Herod’s luxuries on Masada required an ingenious water catchment system using gutters, the natural slope of the plateau; he also captured the rainwater that fell to the west of Masada diverting it into channels, which flowed into cisterns along the slopes of Masada. The cisterns on Masada held millions of cubic liters of water ensuring that the residents of Masada could survive along the arid shores of the Dead Sea, as well as enjoying the luxuries of the pool and bathhouses.

Masada’s popularity derives from the story told by Josephus about the defenders of Masada during the First Jewish Revolt (A.D. 66-73). According to Josephus, a group of Jewish rebels, Sicarii, led by Elezar ben Yair held up in Masada through most of the revolt. A couple of years prior to the fall of Masada, which took place on Passover of A.D. 73, this group of rebels slaughtered the Jewish community at Ein Gedi.

Josephus tells a tale how the Tenth Roman Legion laid siege to Masada, built a ramp up its western slope (the remains of which visitors can still see), yet when they stormed the mountain, they found that the defenders had killed their families and then themselves instead of facing slavery at the hands of the Romans. Josephus provides our only account of this story, and while it offers a daring and captivating tale, it most likely did not happen in exactly that manner. Nevertheless, visitors to Masada see evidence of the lives of the Jewish rebels.

Not needing the luxury of Herod’s royal palace-fortress, the rebels converted portions of the palaces into more serviceable and functional purposes. The room that served as the stables for the donkeys used to bring water from the cisterns below, the rebels converted into a synagogue. Archaeologists found ancient scrolls fragments from the remains of the Jewish rebels. Some fragments preserved portions of biblical books, like Ezekiel; other fragments contained portions of other ancient Jewish literature, like Ben Sira.

Masada offers a fascinating window into the changing political landscape of the land of Israel in the first century. In this way, it enables us to understand themes and trends that we find within the New Testament.

Your ticket for the: Biblical Israel: Masada