Biblical Israel: Shrine of the Book 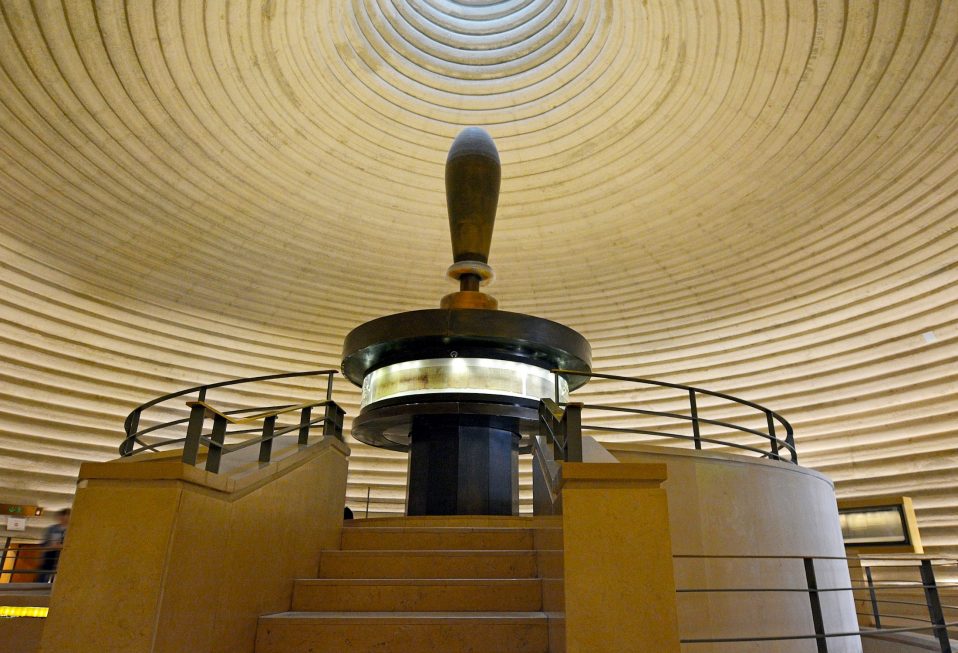 The discovery at Qumran of the first seven Dead Sea Scrolls in 1947 required a suitable place to house them. The American Jewish architects Armand Bartos and Frederic Kiesler were tasked with designing a home for the scrolls at the Israel Museum in Jerusalem. On April 20, 1965, the Shrine of the Book was dedicated.

This landmark of modern architecture incorporated elements of the story of the scrolls as well as the community responsible for them to create a special building that symbolized a sanctuary. The architecture of the building seeks to convey the spiritual meanings of light and darkness and rebirth. The Shrine of the Book sits on the campus of the Israel Museum, which is next to Israel’s Parliament, the Knesset, key government offices, and the Jewish National Library at the Hebrew University’s Giv’at Ram campus. Its location among institutions of government, history, art, and learning, give it a national importance. Moreover, it acknowledges the Bible and ancient Judaism and their importance to the State of Israel.

The buildings architecture incorporates several features that seek to tell the story of Qumran and the Dead Sea Scrolls. The unique white dome of the Shrine of the Book embodies the lid of the jars in which the first scrolls were found. Opposite the whited dome, under which is housed the Dead Sea Scrolls, stands a black wall. The contrast, white and black, symbolize light and darkness two themes that play prominently within the sectarian scrolls of the Dead Sea Scrolls.

One must walk through the black wall to make your way to where the scrolls are housed under the white dome, passing through a tunnel that looks like a cave, but also symbolizes a birthing canal. The idea being that one passes from darkness to light in an act of rebirth. Cases line the walls of this tunnel with scroll fragments and other artifacts discovered at the site of Qumran, which sits on the northwest corner of the Dead Sea. This display seeks to convey daily life at Qumran.

Passing through the tunnel, one enters underneath the white dome. At the center of the hall, in a case built to represent the handle of the rod used for rolling and unrolling a Torah scroll while one reads, sits a facsimile of the Isaiah Scroll. This scroll, found in Cave 1 at Qumran, contains the complete book of Isaiah. The manuscript of this scroll was written around 100 B.C. In cases around the room are portions of actual Dead Sea Scrolls, the Community Rule, Thanksgiving Hymns, Habakkuk Commentary, and Isaiah from Cave 1, and the Temple Scroll from Cave 11.

Below the display of the Isaiah Scroll is a lower level that houses a display of the Aleppo Codex. The Aleppo Codex was originally written in Tiberias, Israel in the 10th century A.D. The Aleppo Codex is the Old Testament-Hebrew Bible in book form. Prior to the discovery of the Dead Sea Scrolls, it provided the earliest Hebrew text of the Old Testament. Its text contains traditions of pronunciation, spelling, punctuation, and cantillation handed down within the Jewish community and formalized in the codex by scholars known as “Masoretes.” The Aleppo Codex traveled from Tiberias to Egypt, and then later to Aleppo, Syria. It was smuggled into Israel in the 1950s.

The Dead Sea Scrolls provide the single most important archaeological discovery of the 20th century. They offer an unparalleled window into the world of ancient Judaism, as well as the history and transmission of the Hebrew Bible-Old Testament.

Your ticket for the: Biblical Israel: Shrine of the Book

Biblical Israel: Shrine of the Book