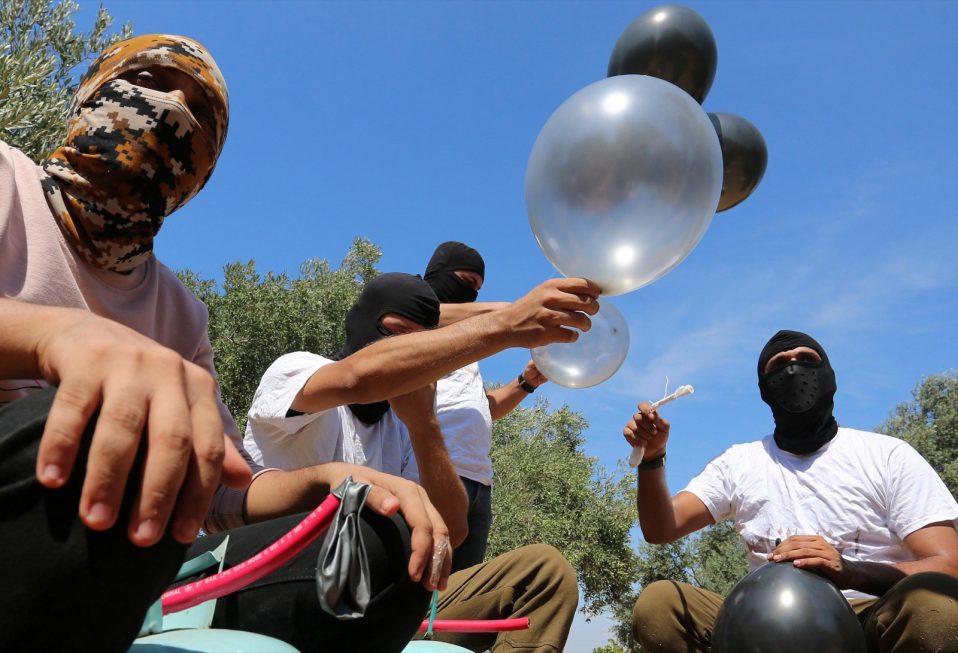 For generations, toy balloons have been a source of fun and joy. That was certainly true in Israel—until Hamas turned these instruments of amusement into implements of terror.

Beginning in 2018, Hamas terrorists in Gaza began tying explosives to balloon bouquets, hoping the winds would blow them toward Israel’s civilians in nearby kibbutzim. Those winds also began carrying balloons to nearby fields—burning thousands of acres of thriving crops that provided food, fruits, and flowers—thereby destroying farmers’ livelihoods.

In the most recent balloon arsons that occurred this past week, three acres of lemon trees burned down in one location, as did an acre of clementine trees. Along with wheat fields and tangerine orchards, a total of 30 acres went up in smoke on this occasion alone. Ashes replaced vegetables, charred land replaced green leaves, and blackened fields replaced fertile soils.

Who but terrorists could concoct such an idea?

These deadly balloon bouquets—marking the first conflict since Hamas initiated the war that ended just last month—are being met with a clear policy response from the IDF: air strikes. Newly elected Prime Minister Naftali Bennett has declared repeatedly over the years that incendiary balloons would be considered on the same threat level as rockets and therefore would require the same swift response. The most recent balloon Intifada (uprising) set 26 fires in southern Israel—all aimed at civilians.

Rabbi Shmuel Bowman, Executive Director of Operation Lifeshield, observes, “While Palestinians have been enthusiastic to burn and destroy this land they claim to own, Israelis are determined to protect and defend our beloved homeland by whatever means necessary.” Operation Lifeshield is an emergency campaign dedicated to saving innocent lives in Israel by providing portable bomb shelters. Since its founding, the organization has provided hundreds of bomb shelters, fire trailers, and ATVs with international assistance—from individuals, churches, CBN Israel, and International Christian Embassy Jerusalem.

Put yourself in Israeli shoes for a moment. You’re inside your kibbutz home just a mile from the Gaza fence. Your children are playing in the backyard. Colorful balloons float over a flower bed. Tied to something that looks a little heavy, the balloons float to the ground. Glancing out the kitchen window, you see your children running toward the bouquet. In their joy, they have forgotten your repeated warnings to never go near any balloons for any reason. You scream, throw down your dish towel, and sprint outside. Horrified, you know that explosives are tied to the bouquet. You grab your children just in time. Hugging them closely, you call for the specially equipped ATVs.

In their fast-moving ATVs, Israeli firefighters speed to your kibbutz and disarm an explosive that could have resulted in the deaths of your children. This is a reality for families living in the “Gaza envelope.” Up to a million Israelis live within range of lethal incendiaries and rockets.  The Jewish Virtual Library notes that since Israel completely withdrew from the Gaza Strip in 2005, terrorists have fired more than 15,000 rockets and mortars putting innocent, Israeli citizens under threat on a nearly daily basis.

In 2007, before Hamas took over in Gaza and terror attacks multiplied, the historic name of this area was simply the “western Negev.” Its seven regional councils include 32 kibbutzim along with towns. The city of Sderot with its 27,000 residents—uniquely targeted by terror attacks—has suffered years of massive rocket fire from Gaza-based terrorists. I have visited Sderot often for briefings.

Kibbutz Nahal Oz is the closest to the Gaza fence—just 875 yards away. Only open fields and a fence separate Nahal Oz’s residents from Gaza. They live in peace until rockets fly, explosive-laden balloons float, or terror tunnels are discovered near their homes. Many times, I have also visited residents living on kibbutzim. I’ve stood at the fences with them, looking into Gaza. Hearing their stories is heartbreaking. Frightened children are often unable to potty train until they are five years old. When her husband is at work, a mom never knows when to take a shower since the Red Alert alarm may go off at any time. And, on hearing the alarm, she knows she has just 15 seconds to figure out which young child to grab first and race to the safe room or a bus stop bomb shelter. Definitely a recipe for nonstop stress.

In a stark, sobering comment, the security chief of this region, Ilan Isaacson said, “We and the IDF are the ‘physical’ Iron Dome of the state of Israel. Everyone in Israel has a good life because we are stopping two million Palestinians from infiltrating. We will get slaughtered if we are not defended.”

Maybe his comment will help answer Israel’s detractors who scoff at and condemn Israel for defending its civilians. After notifying Gazan residents, the Israeli Air Force targets weapons and launchers that Hamas agents purposely stored and used inside civilian areas. Israel laser-targets terror tunnels built underneath Gaza City, where Hamas leaders and fighters can run and hide without any regard to the damaging effects on their own population. And yes, balloons and helium tanks must be destroyed due to its terrible re-purposing designed to burn and kill.

Meanwhile, rather than ignoring the needs of their countrymen, Israelis tackle citizens’ problems with therapeutic solutions to heal broken bodies and spirits. Terrorism has turned Israel into a world leader in developing traumatic stress solutions and treatments. A succession of wars has exacted a hefty toll, especially on citizens in the western Negev—both the soldiers who defend them and the civilian security and firefighting personnel. In Israel, the attacks are sometimes incessant, day after day, month after month, and year after year.

The Israeli traumas cannot be minimized. The same is true for the Palestinians who are held in a prison of oppression due to the chaotic actions perpetuated by their terrorist leaders, and who suffer severely from the relentless border conflict. Those militant leaders use donated multimillions for war, rather than for hospitals, schools, crops, and employment to help Palestinians.

If it is almost constantly under attack, how does an entire nation or a region like Israel’s western Negev heal? A combination of characteristics prevalent among the Jewish citizenry helps. Israel’s culture of life, tenacity, and the ability to rise above the worst hatred and evil demonstrates strength despite sorrow. Israel’s tragedies are a valuable lesson for all of us, as these people choose to live not as victims but as victors.

Join CBN Israel in prayer this week for both Israelis and Palestinians:

“Do not forget to do good and to share with others, for with such sacrifices God is pleased” (Hebrews 13:16).

Your ticket for the: Arson by Balloons: Floating Incendiary and Explosive Devices Target Innocent Israeli Civilians