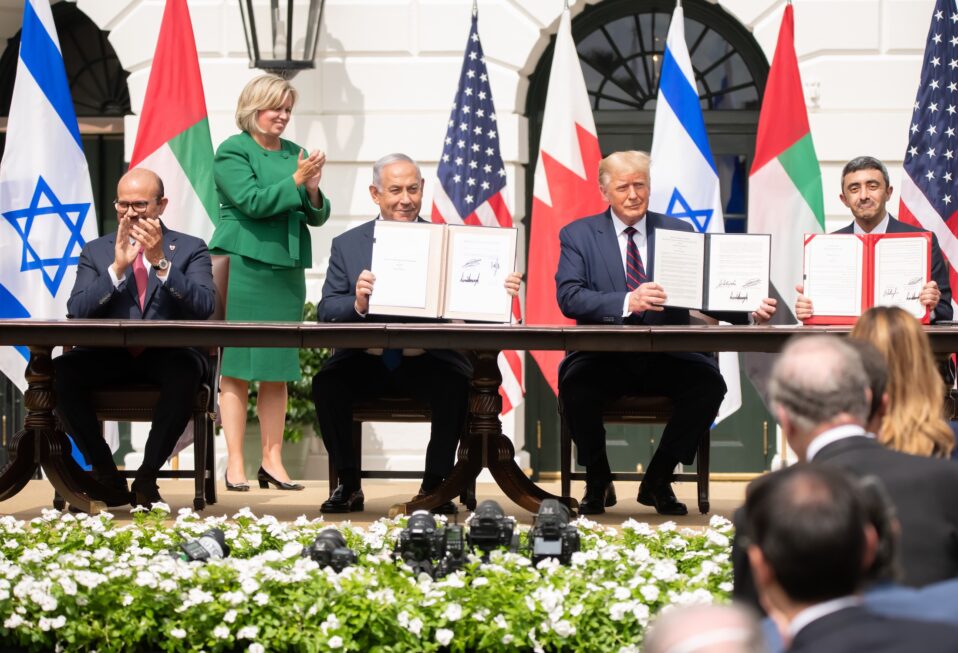 The Abraham Accords, signed on the White House lawn on September 15, 2020, heralded an unexpected miracle. After President Trump announced the upcoming agreements on August 13, 2020, the three monotheistic faiths represented at the table—Christian, Jewish, and Muslim—not only honored Father Abraham, but set a new Middle East direction led by the United States, Israel, United Arab Emirates (UAE), and Bahrain.

Like all agreements between nations, the road has been strewn with detours, barriers, and yes, sometimes-impassable damage. Nevertheless, persistence, commitment, and recognition of the big picture can remove them. As participating nations navigate various challenges in the Abraham Accords, numerous positive results are outlining a new Middle East roadmap. The specter of Iran—the world’s biggest exporter of terror—hovers over both Israel and the Arab Gulf states and has served, in part, as an unpredicted motivator for alliances.

On December 3, 2020, a CNN international correspondent commented, “Never has the process of normalization been so fast, and pursued with such mutual enthusiasm, as between Israel and the UAE. And it goes beyond that. The UAE appears to have dropped, in practical terms, any objections to Israel’s occupation of Arab lands.” (Note to CNN: Israel is not occupying any Arab land.)

Here’s an inspiring personal example of cooperation that has taken place. Michigan Supreme Court Justice Richard Bernstein spent three months in Dubai, UAE, earlier this year. The judge, who has been blind since birth, traveled there on a special mission to “be part of the Abraham Accords.” His focus was on others with disabilities. His visit resulted in new understandings among Arab leaders about disabilities, which some of their children also suffer. In addition, due to Judge Bernstein stopping over in Israel for meetings on his way home, Access Israel (www.aisrael.org)—which is dedicated to “accessibility and inclusion of people with disabilities and the elderly”—will go to the UAE and help them start innovative programs for their own people. This effort could have widespread and much-desired results.

The economic and tourism benefits to the Abraham Accord signatories, which now also include Sudan and Morocco, should be vast in the Middle East. In March 2021, the RAND Corporation, a nonprofit, nonpartisan research group, stated that, “Four million new jobs and more than $1 trillion in new economic activity over a decade” could be possible. They base this on 11 nations eventually becoming a part of the Accords. Between Israel and UAE, RAND projects that trade will grow to $6.5 billion. That includes oil, precious metals, defense, medicine, water, agriculture, cyber, and financial technology.

Tourism, despite on-and-off COVID-19 travel disruptions, resulted in numerous back-and-forth visits between Israel and UAE. Indeed, tens of thousands of Israeli tourists and many business delegations have traveled to UAE. The economic development portfolio of Jerusalem’s Deputy Mayor Fleur Hassan-Nahum includes tourism. Just a few days after the Accords were signed, she set up the UAE-Israel Business Council. Hassan-Nahum observed, “If we managed to create so many relationships during a global pandemic, I think it bodes well for a future of mutual prosperity.” She added, “We created something new here. We are creating the model for a new type of peace.”

Last week Yair Lapid, Israel’s foreign minister, traveled to Morocco where he signed an agreement in Rabat, Morocco’s capital, to reopen the Israeli Liaison Office. He indicated that this was just a first step: “Within two months the two countries will open embassies, rather than liaison offices.” During Lapid’s visit, he and Moroccan officials revealed that Israel and Morocco were already working together on cyber cooperation related to defense. Lapid observed, “Morocco is no chump in the cyber field.”

Bahrain’s Undersecretary for International Relations, Abdulla bin Ahmed Al Khalifa, visited Israel last week for a series of meetings with Israeli leaders. He and Dore Gold, President of the Jerusalem Center for Public Affairs, signed an important public statement of unity on Sunday to oppose Iran. Kalifa, who said he would make an important announcement soon, went on to say, “Hopefully on the fifteenth of September, there will be some sort of demonstration that there is commitment [from the Biden administration].”

Things are a bit more complicated in Sudan. Although one of Sudan’s civilian leaders, Prime Minister Abdallah Hamdok, signed the Abraham Accords, his nation is facing the embedded complexities and national trauma of the three-decade rule of Omar Hassan Ahmad al-Bashir. The former military officer and politician is accused of genocide, war crimes, and crimes against humanity in Darfur. The Sudanese finally overthrew him in a 2019 coup d’état and turned him over to the International Criminal Court. Sudan is still recoiling from the horrors al-Bashir left behind.

After Hamdock signed the Accords last September, the United States removed Sudan from its State Sponsors of Terrorism (SST) list. However, Sudan was first required to pay $335 million to the U.S. for American victims of terror acts launched by Sudan. This payment opened the door for massive financial debt relief. Due to Sudan operating with a transitional government (the Sovereignty Council), elections are not set until 2022. This understandably hinders full implementation of the Abraham Accords.

Nevertheless, some positive steps are happening in that country. Sudan’s religious freedoms are increasing, and their cruel laws against women are decreasing. A delegation of top American agriculture CEOs has visited the devastated nation to help with food initiatives. Modern Sudan is mentioned frequently in the Bible as the kingdom of Cush (Kush). An ancient nation with a Christian history, today it is the third-largest country in Africa, with 44.91 million people in desperate need of dedicated prayers.

To promote ongoing regional gains, Jared Kushner and former White House envoy Avi Berkowitz announced in May 2021 the formation of the Abraham Accords Institute for Peace. Included in this effort are the UAE and Bahraini ambassadors to Washington, Israeli Foreign Minister Gabi Ashkenazi, and Israeli-American businessman and Democratic donor Haim Saban. They will work to increase trade, tourism, and people-to-people contacts between Israel, Bahrain, UAE, Morocco, and Sudan. Their recent joint statement is a source of hope: “In less than a year, this warm peace is melting decades of misunderstanding and hostility across the region. This is a peace among peoples as much as it is among nations. This will be the institute’s focus—to nurture and deepen these human connections.”

As for those person-to-person connections, Emiratis and Israelis are meeting via Zoom and burning up the popular social media service, WhatsApp. Every sector of social media is packed with great ideas and fast-forming friendships. Dubai is hosting a big conference where The Jerusalem Post and the Khaleej Times are holding a conference. The event is fully booked, and there’s a waiting list for other hopeful attendees.

David Ben-Gurion, Israel’s first prime minister, made quite a prediction when he was in office. He commented that it would take the Arab world 100 years to accept the world’s first modern Jewish state. Our prayers can focus on a formidable continuation of the Abraham Accords. Ben-Gurion would likely be astonished and proud.

In the first book of the Bible, Genesis 10:6-7, Noah’s grandson Cush is listed: “The sons of Ham: Cush, Egypt, Put, and Canaan. The sons of Cush: Seba, Havilah, Sabtah, Raamah, and Sabteka.” Let’s be sure to pray for the well-being of the people in an ancient land, today called Sudan.

Please join CBN Israel this week in praying for all of the Abraham Accords signatories and that more countries would join in this unprecented peace agreement:

Your ticket for the: Abraham Accords—A Year Later, Hope is Taking Hold