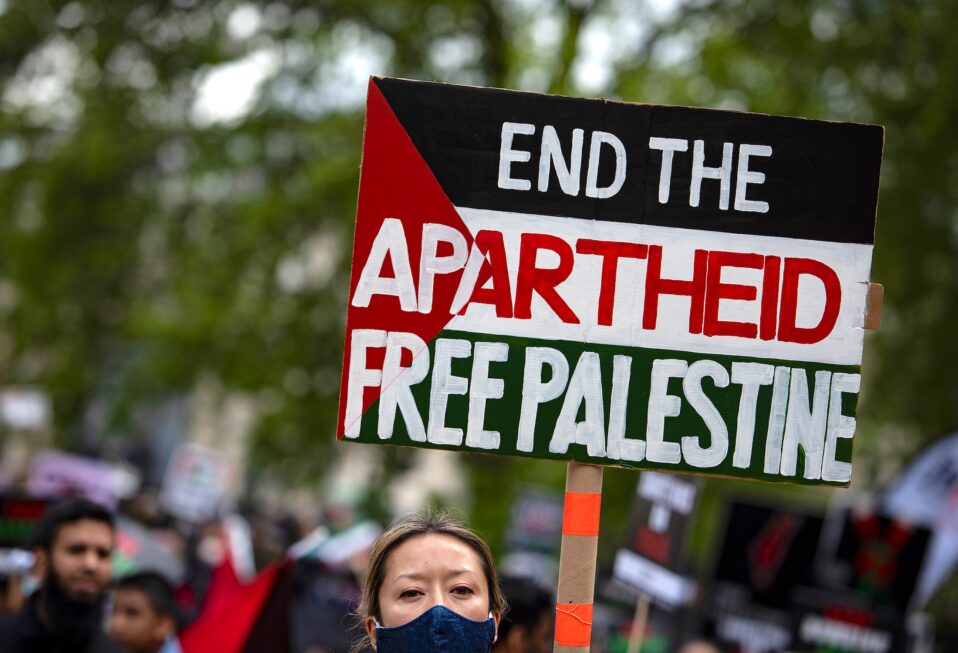 Apartheid is an ugly term with an ugly history. Dutch for “separate” or “apartness,” apartheid was the official policy of racial segregation against nonwhites as formerly practiced in the Republic of South Africa. Between 1948 and 1994, 170,000 white Afrikaners—descendants of Dutch, German and French settlers—wielded cruel policies against 40 million Black people.

Nelson Mandela (1918-2013) successfully led the resistance movement against apartheid. Arrested in 1962 and charged with treason, he remained imprisoned until 1990. In 1993, he and then-President F.W. de Klerk jointly won the Nobel Peace Prize. Soon afterward, Mandela was elected as South Africa’s president, serving from 1994 to 1999.

Just a few years later, the United Nations held the World Conference against Racism, Racial Discrimination, Xenophobia and Related Intolerance. Taking place in Durban, South Africa—called Durban I—its advertised noble theme turned into an opportunity to bludgeon Israel with  apartheid accusations. Nations, NGOs and Palestinian activists rose up against Israel, one of the most inclusive nations on earth. The anti-Israel lies were cemented at the first Durban Conference and continued in Durban II, III, and now IV, mistakenly claiming that Israel displays discrimination against the Palestinian population in the West Bank and Gaza.

At Durban I, both PLO chairman Yasser Arafat and Cuban dictator Fidel Castro castigated Israel. Venomous hypocrisy was on display from Arafat, the man who had planned the 1972 Black September murders of Israeli Olympians, and from Castro, a communist who had subjugated the Cuban people for decades. The gnarled anti-Semitic roots of the Boycott, Divestment and Sanctions (BDS) movement can easily be traced back to Durban I.

This week, on September 22, apartheid was once again on prominent display at the United Nations in what is called “Durban IV.” In a preparatory declaration on December 31, 2020, the United Nations Third Committee stated they would hold a one-day high-level meeting of the [United Nations] General Assembly to “commemorate the twentieth anniversary of the adoption of the Durban Declaration and Programme of Action” at its 76th session, on the theme “Reparations, racial justice and equality for people of African descent.”

None of the Durban conferences has ever recognized Israel as a nation filled with champions of diversity or as the only nation in the world that has brought people of African descent to freedom instead of slavery.

Israel has rigorously acted on “equality for people of African descent.” In its covert operations beginning in 1984, Operation Moses airlifted to Israel 7,000 Ethiopians who had walked to Sudan to escape the communist dictatorship of Ethiopian Colonel Mengistu Haile Mariam. Thousands died on the roughly 700-to 800-mile walk. The biggest airlift in Israeli history took place on May 24, 1991, when the Israeli Air Force undertook Operation Solomon. After removing the seats, Israelis used 34 planes to safely ferry 14,500 Jews to Israeli soil in just 36 hours. The Ethiopian airlifts took place from 1984 into the 1990s. In recent years, smaller groups have been flown out.

All the huge airlifts took place before the first Durban conference. Wouldn’t it be correct in the justice genre for the United Nations to recognize Israel’s historic fidelity to the theme of “equality for people of African descent?” Ethiopians are now settled in their ancestral homeland and, as mentioned, they are citizens, not slaves. Possessing full rights, around 165,500 Ethiopians are citizens serving in all sectors of Israeli society—from Knesset to military leadership, on college faculties, in the media, and as medical personnel.

Israel’s history reveals the true story of a nation willing to rescue those at risk while also recognizing and undertaking the initial challenges of cultural and absorption issues. Hardships, conflicts, successes, and belonging in a free country have lived side by side within the Ethiopian community. Yet the challenges do not erase the overwhelmingly inclusive character of the Jewish nation in welcoming its new Jewish citizens from across the world.

On many of my trips to Israel, I have visited an immigrant absorption center provided for Ethiopians first coming to their modern homeland. These were centers of help to give new citizens the tools to begin Israeli life, since most Ethiopians had left agrarian villages. People at the centers taught them how to shop, turn on electric lights, speak Hebrew, and pay bills.

I have met and interacted with—and listened to briefings from—Ethiopians from several Israeli sectors. Among them was Shlomo Molla, who served in the Knesset from 2008 to 2013 and at one point served as its deputy speaker. I met Mr. Molla at the American Israel Public Affairs Committee Policy Conference in 2010 when I was on AIPAC’s staff as their Southeast Region Christian Outreach Director. He also spoke in my church that year. His story is remarkable and inspiring. AIPAC’s video of his talk is worth watching (view here). In it, he tells of leaving Ethiopia on foot and walking toward Sudan. He was rescued in the middle of the night in the Sudanese desert and airlifted to his new home. In one of his interviews, he described his walk into Sudan as “praying with our feet.”

If planners of any Durban Conference decided to abandon anti-Semitism, they would surely have invited Shlomo Molla to speak. Malcolm Hedding, another leader rich with his perspective about apartheid, would also deserve an invitation.

Reverend Hedding is an acclaimed international speaker, one of the world’s preeminent scholars on biblical Zionism. He grew up in South Africa and later lived in Israel. He knows exactly what apartheid looks like and how it operates. As an Assemblies of God pastor planting numerous churches throughout South Africa, he began confronting the evil system head-on by speaking out against apartheid from the pulpit. When he came to the attention of South African authorities, he faced a coming arrest. Urged by a congregant to leave South Africa as soon as possible with his wife and three children, the pastor and his family fled to Israel. There he served as executive director of International Christian Embassy Jerusalem for 10 years.

In his article, “Israel and Apartheid,” Hedding reflects on living in apartheid South Africa and living in Israel: “Essentially apartheid was a totalitarian system of governance … obsessed with racial superiority.” He defines the apartheid system of segregation as “Aryanism in a new form.”

In one example, he mentions that blacks could not sit on a bench designated for whites only. He notes, “There is absolutely nothing equivalent to this in the dispute that rages between the Palestinians and Israel today. Arabs, Jews, Christians, and Palestinians share the same shopping malls, benches, hospitals, theatres, and in many cases, suburbs.” He also points out the critical distinction that Israel is a democratic state, rather than being governed by a “totalitarian minority.”

Israel and the United States walked out of Durban I in 2001 and boycotted it again this year. Around thirty-two nations joined them. Indeed, the light is growing brighter; nevertheless, the hate and lies persist.

Join CBN Israel this week in prayer for the Jewish nation and people:

May we collectively reflect upon the truth of 1 Peter 3:10-11—“For whoever would love life and see good days must keep their tongue from evil and their lips from deceitful speech. They must turn from evil and do good. They must seek peace and pursue it.”

Your ticket for the: Apartheid Accusations Against Israel Misplaced