Jerusalem, the “City of Three Christmases” in Israel, the Land of Religious Freedom 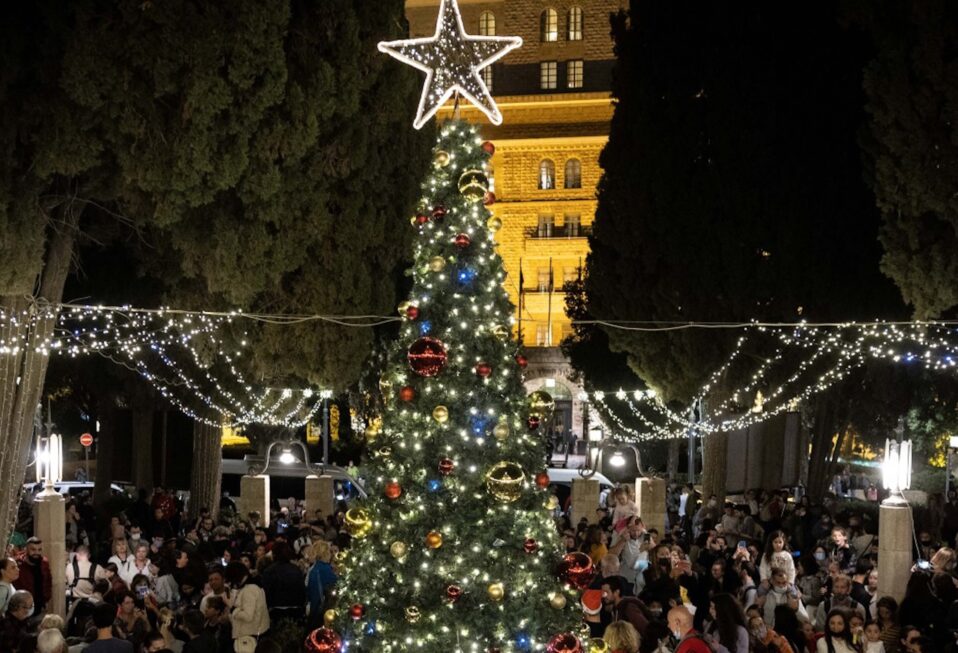 Israel, the world’s only Jewish nation, has historically been a beacon of religious freedom for the three monotheistic faiths of Christianity, Judaism, and Islam. Christmas observances last for days in Israel with a vast array of decorations, festivities, and traditions—and a variety of denominations represented. Catholics and Protestants celebrate Christmas on December 25, 2021, Orthodox Christians on January 7, 2022, and Armenian Christians on January 18, 2022. Thus, another name for Jerusalem is “the city of three Christmases.”

Walking down the streets of Jerusalem you may laugh with delight to see Santa Claus riding a camel on cobblestone streets. To the north, the city of Haifa lights up its 40-foot-tall Christmas tree where the “Feast of Feasts” takes place—with Christians, Jews, and Muslims enjoying foods, music, and the arts together. In Bethlehem, the Church of the Nativity holds a midnight mass and Christmas carols fill the streets of Manger Square. In Nazareth, which contains Israel’s largest Christian population (22,000), Pastor Saleem Salash’s Arab Christian congregation at Jesus the King Church hands out hundreds of gifts to needy children. In Tel Aviv, you might see slender Santas playing volleyball.

Although the actual season and date of Jesus’ birth is an interesting topic of discussion, most traditions view it as occurring in December and call it Christmas. However, Jesus’ virgin birth to a young Jewish woman and His birthplace in Bethlehem are facts of history and lineage, as recorded in Matthew’s first chapter, through King David and Joseph, Jesus’ adoptive father.

While recalling some of the details of Israel’s Christmases, I am reminded of my own childhood. We always read the King James Version of Luke 2 on Christmas Eve. I still have our family Bible, now more than 70 years old, with ruffled pages and candle wax drippings. However, nothing could ever mar those beloved memories of reading the remarkable story of Jesus’ birth with my family. Our Christmas Eve candlelight services, celebrated by hundreds in First Baptist Church in Florence, South Carolina, still linger in my memories as moments of joy. As a teenager, we also attended the Catholic church across the street to celebrate in their lovely, more formal midnight services.

The Old Testament acts as a profound forerunner to the Incarnation when God took on the earthly flesh of redemption in Bethlehem possibly near the Tower of the Flock. Temple-destined perfect lambs were born and raised by shepherd priests for Passover. George Frederic Handel’s Messiah, composed in 1741, is unmatched in its majesty, with eloquent passages such as Isaiah 9:6—“For unto us a Child is born, unto us a Son is given; and the government shall be upon His shoulder. And His name will be called Wonderful Counselor, Mighty God, Everlasting Father, Prince of Peace.” On the occasions I have either attended a concert or sung in the alto section of Messiah, it gives me a glimpse of heaven through its biblical lyrics and Handel’s anointed musical genius.

Now, looking at later years of Israel’s Christians and churches, a few among many churches immediately stand out. The Church of the Holy Sepulcher (the Church of the Holy Tomb) was built in Jerusalem’s Christian Quarter in the fourth century. It was first called a Greek name, Church of the Anastasis (Resurrection). Most Christian tourists visit the church, which is considered the traditional site of Jesus’ death and resurrection. The interior wafts with incense, shines with candles, and creates a sense of overwhelming awe.

Centuries later, in 1849, Christ Church was completed. Located right inside the Jaffa Gate, it is a favorite for evangelicals and part of the Anglican denomination. Christ Church is considered the oldest Protestant church in the Middle East, with a décor both simple and elegant. From its founding, Christ Church has emphasized the fact that the Jewish faith is the building block for Christianity, and it celebrates both Jewish and Christian traditions and holidays.

Another interesting site is Israel’s Young Men’s Christian Association (YMCA). In 1878, the first YMCA branch in Israel opened. The current beautiful building, designed by the same architectural firm that designed the Empire State Building, was dedicated in 1933. An overflow crowd listened to the dedication speech by the famous Christian general, Edmund Allenby. During World War I, his forces defeated the ruling Ottomans in Palestine, as it was called under the British Mandate. The YMCA was dedicated as an institution of peace among the monotheistic faiths, an Israeli NGO with Christian origins.

Evidence of the peaceful purpose of the International YMCA remains on full display in Israel as an example of the Jewish-majority nation that guarantees religious freedom. On November 28 of this year—falling on both the first day of Advent and Hanukkah—1,500 people packed the impressive grounds for the annual Christmas tree lighting. Professor Gabi Scheffler played Christmas music on the YMCA’s 36-bell carillon and Santa made a special visit. Rana Fahoum, Muslim CEO of the Jerusalem International YMCA, commented, “Jerusalemites of every faith look forward to these festivities all year. It is one of the very few occasions where you can see a microcosm of residents—Jewish, Muslim, and Christian. Jerusalem comes to the tree lighting.”

Throughout Israel and in the capital of Jerusalem (the “city of three Christmases”), be assured that Israel’s Christian minority—made up of expatriates, Christian ministry leaders and staff, Messianic believers, Arab Christians, and multiple denominations—are recognized. They are welcome to hold church services, Christian concerts, tree lightings, prayers, and carol singing to celebrate the most profound birth in world history in the land where it all happened.

Israel, the ancestral homeland of the Jews and God’s chosen land for His people, is the place where the greatest gift the world has ever known was given, Jesus our Jewish Messiah.

Please join CBN Israel in prayer this week for Jews and Arabs living in Israel:

May you and your family enjoy a Merry Christmas, or in Hebrew, Chag Molad Sameach!

Your ticket for the: Jerusalem, the “City of Three Christmases” in Israel, the Land of Religious Freedom

Jerusalem, the “City of Three Christmases” in Israel, the Land of Religious Freedom