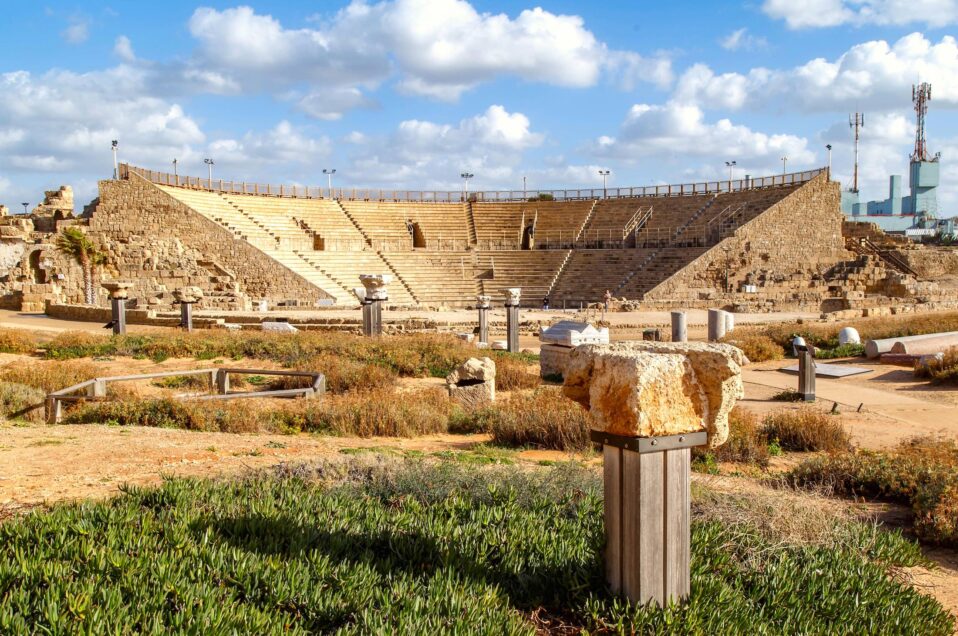 The book of Acts mentions Caesarea a number of times. In Caesarea, the Gospel came to the Gentiles for the first time as Peter proclaimed Jesus to the God-fearing Roman Centurion Cornelius and his family, who subsequently received the Holy Spirit as the Jews had (Acts 10).

The grandson of Herod the Great, Agrippa I, died in Caesarea, an event related in Acts and by the first century Jewish historian Josephus (Acts 12:19-23; Josephus, Antiquities 19.343-350). Paul sailed to and from Caesarea on multiple occasions (Acts 9:26-30; 18:22; 27:2). Paul also remained in Caesarea under house arrest, where he faced the Roman Procurators Felix and Festus, as well as the great-grandson of Herod the Great, Agrippa II, and his sister Bernice, before he sailed to Rome appealing to Caesar (Acts 23:23-27:2).

While Paul found himself under house arrest in Caesarea, Luke—the author of Luke and Acts— was part of Paul’s company, yet he could move freely throughout the land of Israel. It seems reasonable that while he resided in the land of Israel, he came in contact with the material he used to write his life of Jesus and the first part of the book of Acts, before he joined the story in Acts 16 (see Luke 1:1-4).

Herod the Great built up a small Phoenician port named “Strato’s Tower” into the second-largest harbor in the Mediterranean, which he named after his friend and benefactor Caesar Augustus. Around the harbor, which he called Sebastos, Augustus’s Greek name, he built a city with a palace, stadium, theater, and a temple to Augustus. The city continued to grow and expand, reaching its height in the late Roman and Byzantine eras (third through seventh centuries).

After the death of Herod in 4 B.C., the territory of Caesarea fell to his son Archelaus (Matthew 2:22). Rome, however, removed Archelaus from power in A.D. 6 at the request of his Jewish subjects. Rome annexed his territory and brought it under direct Roman rule, which took the form of Roman prefects. These provincial governors, like Pontius Pilate, resided in Caesarea as it became the headquarters and administrative center for the Roman governors.

Archaeologists uncovered a dedicatory inscription of a small temple to the Roman Emperor Tiberias by the Roman Prefect Pontius Pilate. This inscription actually provides an important window into the psychology of Pilate, who went to excessive lengths to put himself in good favor with the emperor.

The First Jewish Revolt against Rome (A.D. 66-73) broke out in Caesarea as tensions between the local Jews and Gentiles boiled over. At the conclusion of the revolt, the Roman general Titus forced 2,500 Jewish prisoners of war to fight to the death in the stadium of Caesarea as part of his victory games.

Caesarea played an important role in the history of the Church Fathers. Origen (A.D. 185-254) taught 23 years in Caesarea, where he established a library. Eusebius used the library of Caesarea to write his Ecclesiastical History.

Your ticket for the: Biblical Israel: Caesarea