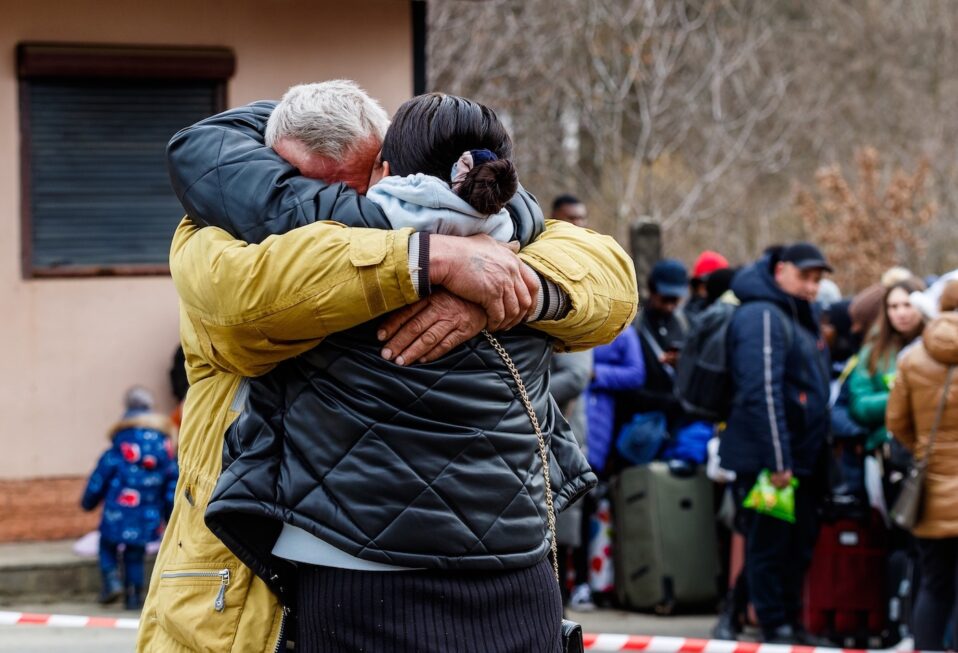 Victimized under Vladimir Putin’s campaign of unrestrained violence, Ukraine is another nation to suffer the bitter fruit of oppressive regimes since World War II. At this writing, upwards of 2 million Ukrainians are now classified as refugees fleeing Russia’s brutal military campaign—an evil that has no boundaries and a hatred that murders children. Families are shot dead in the streets, while hospitals, churches, schools, and apartment buildings are bombed. Ukrainians are not strangers to Putin’s imperial whims, of course. In 2014, Russian forces invaded and then annexed the Ukraine’s Crimean Peninsula.

But this time, it’s different. An order of magnitude different.

The Ukrainians now on the run are among 26.4 million refugees worldwide. This global figure tragically soars to 82.4 million people when one includes those who were forcibly displaced by civil war within their nation’s borders, according to a United Nations High Commissioner for Refugees report released in 2021. Refugees are those who have fled war, violence, conflict, or persecution and crossed an international border to find safety in another country.

One common denominator can be found in most refugee catastrophes. Populations flee regimes with leaders holding titles like president, prime minister, or supreme leader. These leaders can nevertheless be described by one or all of these terms: autocrats, communists, dictators, despots, totalitarians, and tyrants. They share the same methods: oppression, torment, persecution, and murder. Some wear a suit and tie with a hidden mantle of skillful propaganda publicly speaking in a calm tone like Putin. Others appear as Hitler once did—in uniform, hypnotically evil, and ranting publicly, yet surrounding himself with elegant art, elite parties, and classical music. Still others are like Iran’s Ayatollah Sayyid Ali Hosseini Khamenei, who rules the world’s first and only Shiite theocracy. He is determined to achieve nuclear capability, and not for peace.

Several developments in Ukraine demand vigilance. After Putin made a nuclear threat last week, on Friday Russian forces bombed a building near Zaporizhzhia Nuclear Power Station—the largest in Europe—then took control of the facility. Ukrainian President Zelensky observed, “We survived the night that could have put an end to history.”

Yet the threat continues, and the Ukrainian staff at the power plant are now hostages. What is Putin’s plan with Ukraine’s four other nuclear plants and their 15 reactors? The International Atomic Energy Agency (IAEA) is especially concerned, since Russian forces have disabled most mobile networks, internet, and telephone lines. IAEA Director-General Rafael Grossi commented, “Operating staff must be able to fulfill their safety and security duties and have the capacity to make decisions free of undue pressure.” Ukraine’s regulator reported that radiation levels remain normal at this time, although reduced communications affect nuclear safety and security. As for Russia and any agreements they make, they are violating international norms as members of the International Atomic Energy Agency. The agreements prevent any armed attacks against nuclear plants operated for peaceful purposes, which applies to Ukraine for their electricity.

Such developments are troubling. As a recent report in the Wall Street Journal states: “The attack removed any doubt that Vladimir Putin is willing to risk nuclear catastrophe. If Ukraine loses the capacity to secure and protect fuel rods, waste and other radioactive material at its civilian nuclear power plants, it will threaten the environment, safety and public health well beyond Ukraine’s borders. Western powers need to be mindful of that danger as they consider how to respond to Moscow’s aggression against Ukraine.”

Another development that could intensify complications and fighting is a report that Russia is recruiting Syrian fighters. One concern is that Russia may be recruiting elite Iranian Revolutionary Guard Corps (IRGC) personnel who are trained in urban warfare, which is what Putin needs. Iran has stationed its forces in Syria for the last 10 years to focus on destroying Israel. Russia has backed Syria’s dictator, President Bashar al-Assad, an Iranian surrogate.

The Syrian refugee crisis began in 2011 during the anti-government uprisings collectively known as the Arab Spring—uprisings that led to large populations of internally displaced peoples. Here is what Putin helped Assad do to the Syrian people: He caused what World Vision calls “the largest refugee and internal displacement crisis of our time.” World Vision further notes that “about 6.8 million Syrians are refugees and asylum-seekers, and another 6.7 million people are displaced within Syria.” What does that mean? That more than half that country’s population—13.5 million Syrians in total—have been forcibly displaced. Of over 11 million people in Syria needing humanitarian assistance, half of those affected by the Syrian refugee crisis are children. The total dead are estimated by the United Nations at 350,000.

Whether Putin recruits the IRGC in Syria or Syrian soldiers themselves, the outcome remains ominous. Assad, Putin, and Ayatollah Khamenei constitute a terror trio cooperating on multiple levels. Obsessed with power at any cost, they operate from calculating minds driven by self-interest and skewed religious ideologies and are devoid of a conscience when it comes to the deaths of innocent men, women, and children.

Observing the world through a lens of both the reality of evil and the triumph of goodness is an indispensable balance. Our Lord Jesus alerted us to both. Added to His Life-giving words is the promise and indwelling of His Holy Spirit where we draw His abundant counsel and comfort.

In our prayers for Ukrainians, for those who are fleeing or remaining, and for organizations, individuals, and nations that shine as lights of love and help, let us be sure to continue our vigilance.

Please join us this week at CBN Israel in prayer on behalf of Ukraine, the nations involved, and compassionate helpers:

As we pray, may be reflect upon Hebrews 12:1-2: “Therefore we also, since we are surrounded by so great a cloud of witnesses, let us lay aside every weight, and the sin which so easily ensnares us, and let us run with endurance the race that is set before us, looking unto Jesus, the author and finisher of our faith, who for the joy that was set before Him endured the cross, despising the shame, and has sat down at the right hand of the throne of God.”

Your ticket for the: Russia Adding Ukrainian Refugees to the Bitter Fruit of Communism and Dictatorships