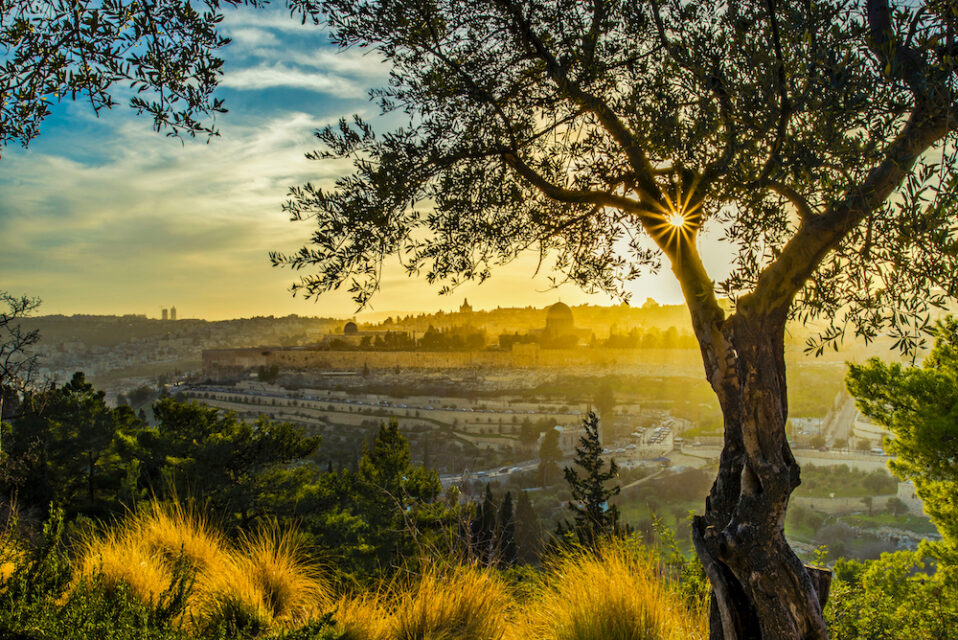 The Mount of Olives is a north-south ridge that sits on the eastern watershed of the hills around Jerusalem. To its east, the land slopes drastically down towards the Jordan River Valley and the area around Jericho, towards the Dead Sea.

The Mount of Olives in antiquity never belonged inside the city of Jerusalem. It always sat as its eastern boundary separated from the city of Jerusalem by the Kidron Valley. The Mount of Olives also served as Jerusalem’s cemetery beginning in the Chalcolithic period (Stone Age). Tombs from the time of the Judean monarchy (Old Testament), as well as the first century (New Testament) have been discovered on the Mount of Olives. At the foot of the mountain sit three monumentally decorated tombs from the first centuries B.C. and A.D., one of which is the misnamed Tomb of Absalom.

When Jesus entered Jerusalem on His “Triumphal Entry” (Luke 19:28-29), He approached the city from the Mount of Olives. Pilgrims to Jerusalem today can walk down the Mount of Olives on the “Palm Sunday” processional route, but this would not have been the path Jesus took, as it led through a first century cemetery, which would have rendered Him ritually impure prohibiting Him from entering the Temple. Most likely His route would have taken Him over one the saddles of the ridge on either its northern or southern part.

The prophet Zechariah proclaimed that at the end of the age, when God’s kingdom is revealed in all the world, that He will stand on the Mount of Olives, which will split east to west, opening a chasm that will cause the mountain to move to the north and south (Zechariah 14:4). The Mount of Olives is not only connected to Jerusalem’s history in both the Old and New Testaments; it is also directly linked to its future.

Your ticket for the: Biblical Israel: Mount of Olives