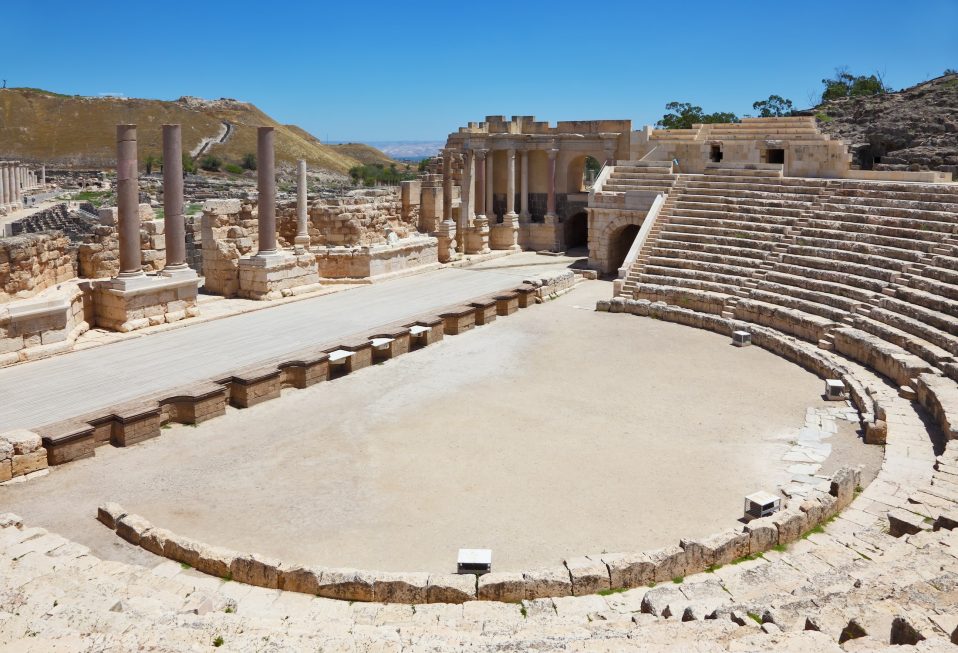 Located at the intersection of two significant roads that crossed the land of Israel from west to east, through the Jezreel and Harod Valleys towards the land east of the Jordan River, and north to south, through the Jordan River Valley, Beth Shean’s prominence came due to its location. The importance of its location is underscored by being inhabited from the late Neolithic period until the Middle Ages.

Egyptian sources mention Beth Shean, and it served as an Egyptian administrative center during the 16th-13th centuries B.C., when Egypt controlled the region. Beth Shean appears often within the sources during the Hellenistic, Roman, and Byzantine periods where the city is known as Scythopolis (“city of the Scythians”) or Nysa Scythopolis.

After the death of Saul and his sons on nearby Mount Gilboa, the Philistines hung their bodies on the walls of Beth Shean (1 Samuel 31:10). The men of Jabesh Gilead, in the Transjordan, later retrieved their bodies burning them and burying them in Jabesh Gilead (1 Samuel 31:12). Like Megiddo, Beth Shean served an important role along significant international roadways, which means that it rarely came under the control of the kingdom of Israel.

The Gospels do not mention Jesus in Beth Shean, Scythopolis, as he avoided non-Jewish villages and cities. Yet, Luke mentions that on his way from Galilee to Jerusalem he passed between Galilee and Samaria (17:11). Luke’s precise geographic language reflects the geopolitical reality of the first century in which Beth Shean, the Harod Valley, and even the Jezreel Valley lay neither in Galilee, nor in Samaria.

Visitors to the site of Beth Shean today see primarily the Roman-Byzantine city. The biblical period site resides on the high tel that overlooks the lower Roman-Byzantine city. On the tel, archaeologists have excavated five different temples from the Bronze Age to the early Iron Age. Also, on the top of the tel, excavations have revealed Egyptian and Canaanite presence.

The lower city, most of which dates to the late Roman and Byzantine periods, preserves remains of two large bath houses, with public toilets, a large theater, with portions of the backdrop still intact (reconstruction work has added more to this), a public market, nymphaeum (a public fountain), a public market, and shops.

Your ticket for the: Biblical Israel: Beth Shean