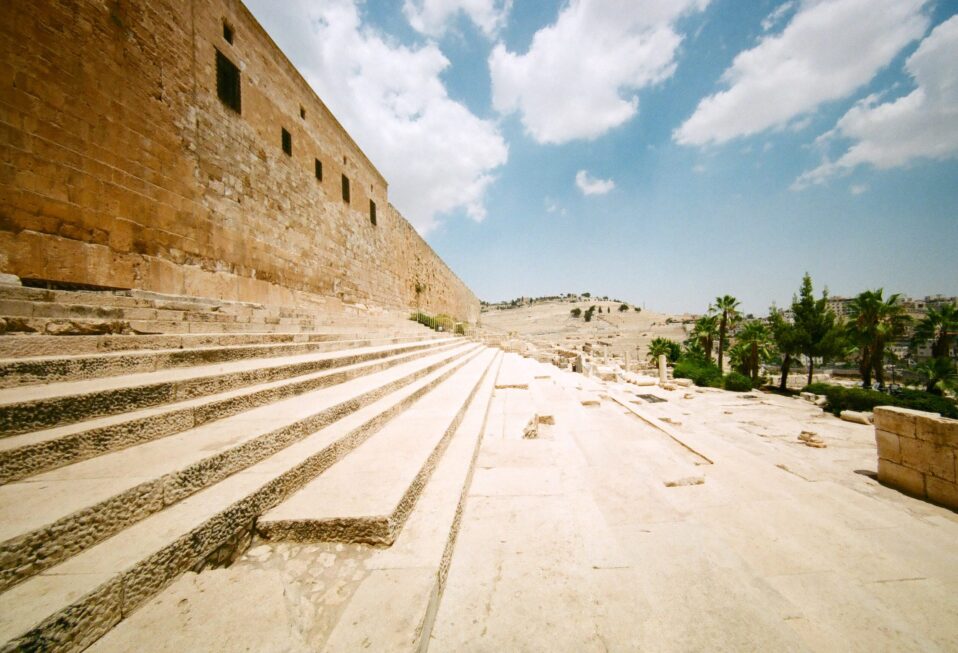 Today visitors to the southern steps of the Temple Mount see remnants of the two sets of gates. The western most of the gates preserves the remains of a double gate, which served as the exit for pilgrims to the Temple. The eastern most set of gates is today a triple gate sealed, most likely, during the Crusader period. This gate was also originally a double gate, and through it, pilgrims entered the Temple. If a pilgrim was in mourning, they reversed their course, entering through the exit and exiting through the entrance, so that other pilgrims could comfort them saying, “May He that dwells in this house give you comfort!”

We hear of Jewish Sages sitting on these steps teaching their students and interacting with pilgrims entering and exiting the Temple. Today, most of the steps have been reconstructed, but a few of the original steps remain exposed. The steps leading up to the Huldah Gates follow a pattern of long, short, long, short. This arrangement makes it difficult for the pilgrim to ascend the steps either running or in great haste. Thus, one must approach the sacred Temple, the house of God, in a circumspect manner.

South and east of the southern steps archaeologists uncovered a large and unique Jewish ritual immersion bath, a mikveh. Its proximity to the Temple, as well as its unique construction, have led some to suggest that this served the priests for their ritual purification. Other ritual immersion baths have been discovered along the southern end of the Temple Mount, which served Jewish pilgrims who immersed and purified themselves prior to entering the Temple (see Acts 21:24).

Your ticket for the: Biblical Israel: Southern Steps