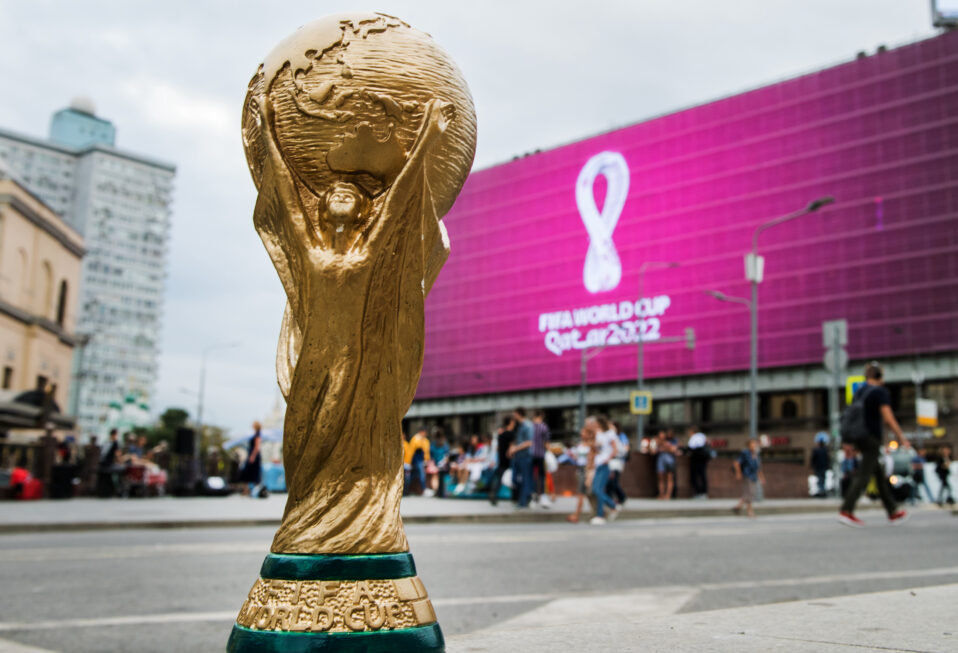 Every four years, the FIFA World Cup grabs international attention as the biggest sporting event on the planet. FIFA stands, of course, for the International Federation of Association Football, which governs the event. And while Americans call the sport soccer, it is the word football that sends fans worldwide into a competition frenzy. This year’s soccer extravaganza—held between November 20 and December 18—may be viewed by upwards of 5 billion people.

However, an unwelcome kind of sport is infringing on the event’s enjoyment for 10,000-plus Israeli fans: the hateful pastime of anti-Semitism.

This year, the nation of Qatar is hosting the first World Cup to be held in the Middle East. To comply with hosting requirements, Qatar agreed to allow in Israeli fans. Yet at the games, Israeli journalists are facing hostility on numerous fronts. Two journalists for Israel’s Ynet News—Raz Shechnik and Oz Mualem—say that whenever they report, they are followed by Palestinians, Iranians, Qataris, Moroccans, Jordanians, Syrians, Egyptians, and Lebanese—all giving them “looks full of hate.” And, although FIFA requested there be no political messages at the World Cup, Tunisian fans prominently displayed a “Free Palestine” flag at a game between Tunisia and Australia.

Israel’s Foreign Ministry advised its citizens to keep a low profile while in the small, authoritarian Muslim nation. They provided careful instructions about Qatar’s laws, which outlaw alcohol and drugs of any kind, and a list of other policies that carry heavy penalties or imprisonment.

To say that travel arrangements between Israel and Qatar were complicated would be an understatement. Sunday’s direct commercial flight from Tel Aviv to Doha was a first. However, Israel’s El Al airline was not allowed to land in the Shiite Muslim country, which has no diplomatic relationship with the Jewish state. Undeterred, Israel chartered flights through Cypriot Tus Airways, which departed from Tel Aviv.

But not all the drama at the games is about Israel’s reception—or the events happening on the playing field. What some might find surprising is that Iran’s leaders are threatening their own team (affectionately called Team Melli), so that Iran’s menace against its own citizens is on full display. And media around the world are reporting these transgressions.

Here’s what made headlines. In its first game on November 21, Team Melli bravely refused to sing the Iranian national anthem. Their message on the world stage was to support the courageous female-led freedom protests against regime leaders. The following day, at its second game, Team Melli sang their anthem—but did so quietly. Half-heartedly.

We now understand why. CNN and numerous other news outlets reported that Iran’s terrorist leaders, ahead of the match with the U.S. team on Tuesday, had threatened their team with imprisonment and torture if the players did not “behave.” Threats of violence were extended to the players’ families, as well.

In an opposite and welcomed way, the U.S. State Department issued support for Team Melli, declaring, “Iran’s leadership should be heeding their athletes’ calls for change, rather than stifling them through intimidation and threats. The people of Iran and the nations of the world will be watching the athletes’ treatment upon their return to Iran.”

Bolstering their own threats, Iran deployed its elite Iranian Revolutionary Guard Corps (IRGC) to monitor Team Melli, which is not allowed to associate with anyone but their teammates. Spectators have booed Iran’s national anthem—likely including Israeli and Arab fans also threatened by Iran. Iranian team supporters waved a huge flag emblazoned with, “Woman, life, freedom,” a refrain supporting the ongoing protests inside Iran. IRGC escorted them out of the stadium. Pro-Ayatollah-government Iranians and the IRGC have intimidated anti-government Iranian fans wearing protest gear outside the stadiums.

While Iranian threats are playing out on the world stage, Israelis are enjoying the World Cup experience, despite being fully aware of the security threats and complications. Neither the Israeli nor the Palestinian team made it into this year’s competition. However, eager Israeli football fans have traveled to Qatar to view the 32 teams playing. Israel notes that number could reach 20,000.

The U.S. Soccer Federation, in a visual statement with strong humanitarian overtones, changed the Iranian flag in a photo by omitting its icon and leaving only its stripes. The U.S. Federation explained they did this as a show of solidarity—an indication of “support for the women in Iran fighting for basic human rights.” The U.S. Federation said it changed the flag for only 24 hours. An angered Iran asked FIFA to kick the U.S. out of the World Cup, thankfully to no avail. Protests continue in Iran, where with Human Rights activists report that 451 protesters are dead and 18,000 people have been arrested.

Amid the convergence of athletics and human rights taking center stage, when fans enter the 45,857-seat Khalifa International Stadium, they step into a world of athletic opulence and excitement on steroids. With an estimated 2.89 million tickets sold as of November 14, fans will be rubbing shoulders with countless thousands from nations around the globe.

I find it interesting that, in contrast to the hustle and excitement of the games, Palestinian President Mahmoud Abbas chose a quieter entry to the World Cup—perhaps to avoid flaunting the opulence he enjoys while his countrymen have so little. Few Palestinians will ever experience the luxury Abbas enjoys not only at the World Cup but in his mansion in Ramallah; his government’s corruption keeps most of the population in poor circumstances. Wafa, the official Palestinian news agency, is covering the World Cup but did not mention Abbas’s delegation even though Abbas attended the dazzling opening ceremony.

In a leaked document, Palestinian Media Watch provided an inside look at Abbas and his 16-member World Cup entourage. The documents contained correspondence between Abbas’s office, the Palestinian Embassy in Qatar, and the Qatari Foreign Office. One document shows Abbas’s State of Palestine Delegation invoice from the Ritz Carlton Hotel for November 16–26. The amount: a staggering $79,478.02. The Palestinian Authority and Palestinian Liberation Organization’s glamorous trip comes amid their claims of a “severe financial crisis”—one that clearly does not affect the Palestinian leaders.

Hamas leaders are likely attending the World Cup and are doubtless ensconced in luxury boxes at Khalifa International Stadium, since Hamas and Qatar are good friends. Qatar funds the Gazan terror that has plagued Israel since Hamas took over in 2007. Key Hamas terrorist leaders Ismail Haniyeh and Khalil al-Hayya now live in Qatar instead of the poor conditions they left behind in Gaza among 2 million Gazan Palestinians. As reported in January 2022 by the Arabic news source Al-Awsat, eight Hamas leaders have exited Gaza to live in Qatar and Turkey.

A financial dark side lurks within Qatar’s World Cup fame. In a recent Jewish Chronicle article, Israeli civil rights attorney Nitsana Darshan-Leitner commented on the wealth that stuffs the pockets of terrorists so they can continue their hatred toward the world’s only Jewish state. Darshan-Leitner successfully prosecutes terrorists on behalf of Jewish victims. She points out that Qatar has already financed billions of dollars for Hamas to reinforce its terror activities against Israel.

“If Qatar profits with billions of dollars from the World Cup, a percentage of that will be given to Hamas for rockets, guns, tunnels, and training to kill Jews,” she says. “Qatar and Iran are the main Hamas funders. Every T-shirt and every scarf sold in Doha pays for another bullet and another knife aimed at innocent Jews.” Darshan-Leitner calls Qatar “the ATM of terror organizations, mainly Hamas.”

Americans will definitely enjoy the entertaining games, interviews, and media via TV and live streaming that NBC Sports predicts will pull in 5 billion viewers. If any of you are among the fans, take a moment to pray for Israeli fans, Team Melli, and enthusiasts courageously and peacefully protesting during the remaining eighteen days of the World Cup.

These two verses fit both the FIFA World Cup and our own walk with the Lord:

“Athletes cannot win the prize unless they follow the rules” (2 Timothy 2:5 NLT).

“All athletes are disciplined in their training. They do it to win a prize that will fade away, but we do it for an eternal prize” (1 Corinthians 9:25 NLT).

Please join CBN Israel this week in prayer for Israel and the Middle East:

Your ticket for the: FIFA World Cup: Anti-Israel Drama Plus Iran’s Brutality Exposed