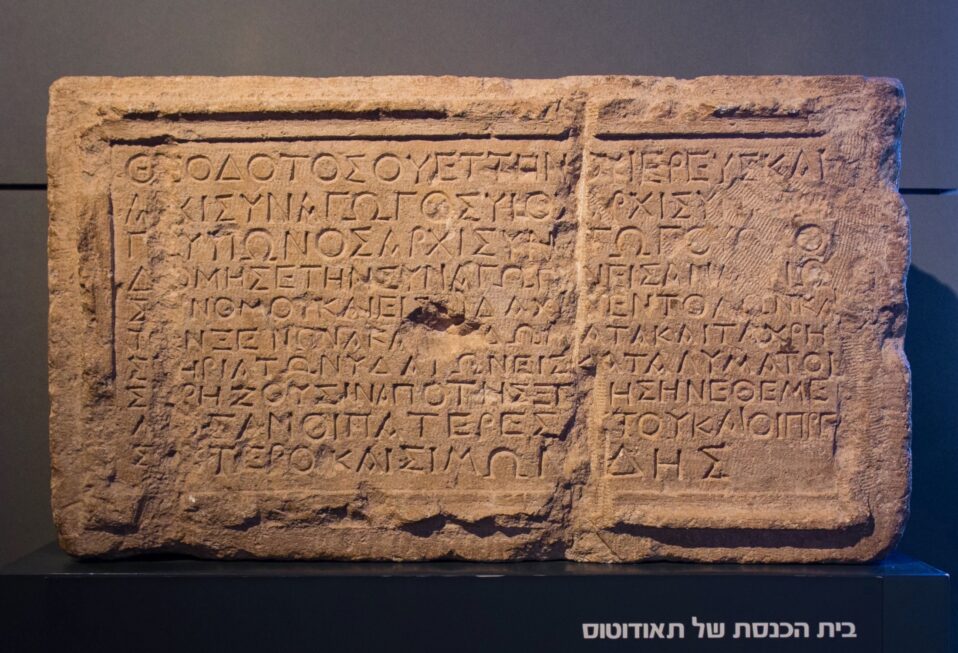 In the centuries between the Old and New Testaments, an important institution developed within Judaism, the synagogue. The Gospels and Acts mention synagogues frequently; they played an important role in the lives of Jesus, His followers, and the growth of His movement. The origins of the synagogue, though, are shrouded in the mists of time. The earliest witness to them come from inscriptions outside of the land of Israel.

One such inscription from Egypt, dating to the 3rd century B.C., refers to a “place of prayer.” Within the Jewish Diaspora (the Jewish community outside the land of Israel), ancient sources (both literary and archaeological) refer to synagogues in various ways: synagogues, which means a gathering or meeting place, prayer houses, and sabbateions (Sabbath places). We should not assume that they all functioned exactly the same, but the ancient sources do indicate a degree of similarity. Synagogues today, both within Israel and outside of it, serve as places of communal prayer. Scripture is read, but the synagogue service centers around prayer, an act reminiscent to the earliest practice attributed in Diaspora synagogues as attested by the ancient sources.

Our ancient sources do not indicate that prayer took place regularly within the synagogues of the land of Israel. Rather, we find these sources, like Luke 4, consistently depicting the reading of the Scriptures and their explication as central to Sabbath worship in the synagogue. Moreover, the first century synagogues that have been discovered, like at Gamla and Magdala, have a main hall with benches around the sides making the center of the hall the focal point. Jews pray facing towards Jerusalem.

Later synagogues in the land of Israel, after the destruction of the Temple, orient their halls towards Jerusalem. This indicates that in later periods prayer became an essential part of the synagogue service, but not in the first century in the land of Israel. Instead, as indicated by the Theodotus inscription, the primary role of the synagogue was the reading of the Torah and its teaching. The orientation of first century synagogues, focused on the center of the hall, reflects such a reality. It should also be noted that this is what the Gospels depict Jesus doing in the synagogue on the Sabbath, reading the Scripture and teaching.

Your ticket for the: Biblical Artifact: Theodotus Synagogue Inscription