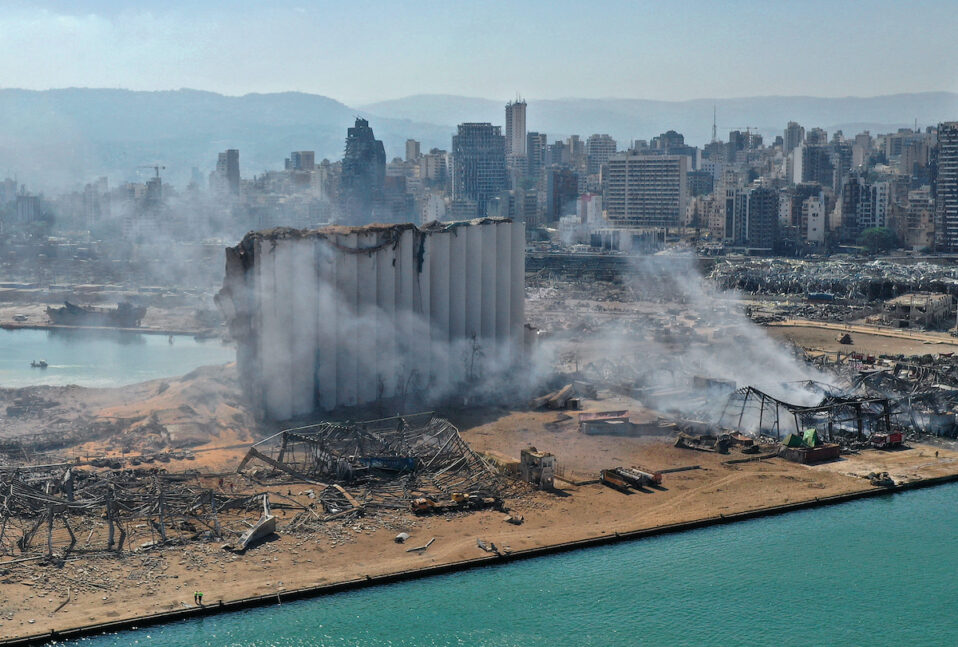 Once considered the “Paris of the Middle East,” Beirut has been in decline for decades. When 2,750 tons of ammonium nitrate were recklessly stored (and then neglected) for years in a port warehouse, it was a recipe for disaster. And on August 4, a massive explosion blasted a 141-foot-deep crater into the capital city, leaving the country in far worse shape than before. The toll is mounting daily, with hundreds killed, thousands wounded, and more than 300,000 homeless. The blast registered as a 3.3 earthquake on the Mediterranean island of Cyprus, about 125 miles to the west.

Driven by anguish and rage, thousands of Lebanese citizens have filled the streets protesting their corrupt and criminally negligent government. For decades, elite officials from different parties stole monies collected in the import-based economy, divvied it up, and lived the good life at the expense of ordinary citizens—a kleptocracy with politicians stealing money from government coffers.

The Lebanese Prime Minister and his cabinet have now resigned en masse, and the protesters reacted with an outpouring of joy. On Sunday, a hastily convened donor conference of nations pledged $298 million dollars for immediate relief, but it will take billions to restore the beleaguered nation.

Israel was one of the nations that stepped up to pledge assistance, even though Israel and Lebanon do not have a peace treaty. Despite a history filled with conflict and war, Israel immediately reached out. Israeli President Rivlin was quick to remark, “We share the pain of the Lebanese people and sincerely reach out to offer our aid at this difficult time.”

As with any democracy, opinions in Israel differ. Some Israelis are sympathetic to giving aid despite past hostilities. Others object to reaching out, especially with the Israel-Lebanon border heating up again and the feeling that Israel is not doing enough on the home front in helping with the COVID-19 crisis.

A spokesman in the Israel Defense Forces (IDF) stated, “This is the time to transcend conflict.” In recent remarks to the Knesset, Prime Minister Netanyahu summed it up: “We distinguish between regime and people. That is our way.”

Yet, with a history of humanitarian aid to the nations, it should come as no surprise that Israel quickly reached out to Lebanon. Several Israeli hospitals have offered to help. The IDF spokesman to the Arab world sent out this message from Masaad Barhum, Director of the Galilee Medical Center near the Lebanon border: “We only want to help you. Rest assured those who come in wounded and hurt will leave safe and sound, with the grace of God. We’re waiting for you.”

The Israelis have a lot to offer in expert skills and superior resources that they have developed out of necessity, with decades of terror against them. Among these, IsraAID is a superstar. Established as a non-governmental entity in 2001, this humanitarian aid agency has worked in 50-plus countries on projects both large and small. In Nepal, for instance, they set up HoneyAID, which gives women an income through beekeeping. In Lesbos, Greece, where thousands of refugees escaped the Syrian civil war, IsraAID set up the School of Peace for 4,000 refugee children. Kenya receives help year after year. IsraAID has even come to the United States—immediately after Hurricane Katrina hit in 2005 and to help evacuees from California wildfires in 2018.

A few years ago, I observed Israel’s humanitarian outreach firsthand, when I led a group of Christian leaders for a briefing from officials at Ziv Hospital. Afterward, they allowed us to meet and speak with Syrian adults and children through a translator. The IDF had set up a field hospital as part of their Operation Good Neighbor during Syria’s civil war. From the Israeli-Syrian border the IDF had transported the gravely wounded to Ziv Hospital in Safed. Like Hezbollah terrorists in Lebanon, most Syrians hate Israelis, so I will always remember what one of the wounded Syrian teenagers said to us. “We were taught to hate Israel, but we know now they are our friends.”

Some may be surprised at the Lebanese refusal of aid. Israel offers aid even to enemy countries, although their offers are refused. Too many nations view the Jewish state with hatred and disdain. Exacerbated by decades of hatred, that loathing intensified from the terrorist Hezbollah in the mid-eighties, when it started spreading its Iran-backed tentacles into every sector of Lebanese society. Hezbollah’s control of the population made it almost impossible to kick them out—along with their 200,000 missiles. And with more than 25,000 fighters, this terror group has a medium-sized army, yet it’s stronger than Lebanon’s.

Hezbollah’s leader, Hassan Nasrallah, claims no responsibility for the explosion, but unfortunately—with Hezbollah’s control—traumatized Lebanese citizens may not benefit from Israel’s humanitarian outreach. In the meantime, though, Dima Sadek, one of Lebanon’s most popular media personalities, posted a viral Twitter video addressing Nasrallah, “What has Israel done against us that’s worse than you? Answer me!”

The United States, Great Britain, Russia, France, Germany, Qatar, Canada, and Australia are already sending emergency aid, but it remains to be seen if Lebanon, leaderless at the moment, will allow Israel’s help.

It is heartbreaking to read about Lebanon, where their wealth has long been plundered, and now they must deal with this catastrophe. Lebanon appears around 75 times in the Old and New Testaments. Psalm 92:12 describes Lebanon’s beauty in ancient times. “The righteous flourish like the palm tree and grow like the cedar in Lebanon” (ESV). The cedars of Lebanon were used to help build Solomon’s Temple. And Matthew 15:21-28 tells the story about Jesus’ visit to the region of Tyre and Sidon, where He cured the daughter of a Gentile Canaanite woman.

Sadly, most of what the world hears about Israel is another kind of blast filled with an ammonium nitrate of lies and anti-Semitism. In Isaiah 49:6 ESV, the God of Abraham, Isaac, and Jacob declared about Israel, “I will make you as a light for the nations, that my salvation may reach to the end of the earth.” A “light for the nations” is a title that endures forever.

Join CBN Israel in praying for the relationship between Israel and Lebanon:

It is my prayer that Israel continues to be a light to the nations, and that all might come to appreciate Israel’s long history of reaching out in friendship.

Your ticket for the: Israel Offers Aid to Lebanon Amid Catastrophe