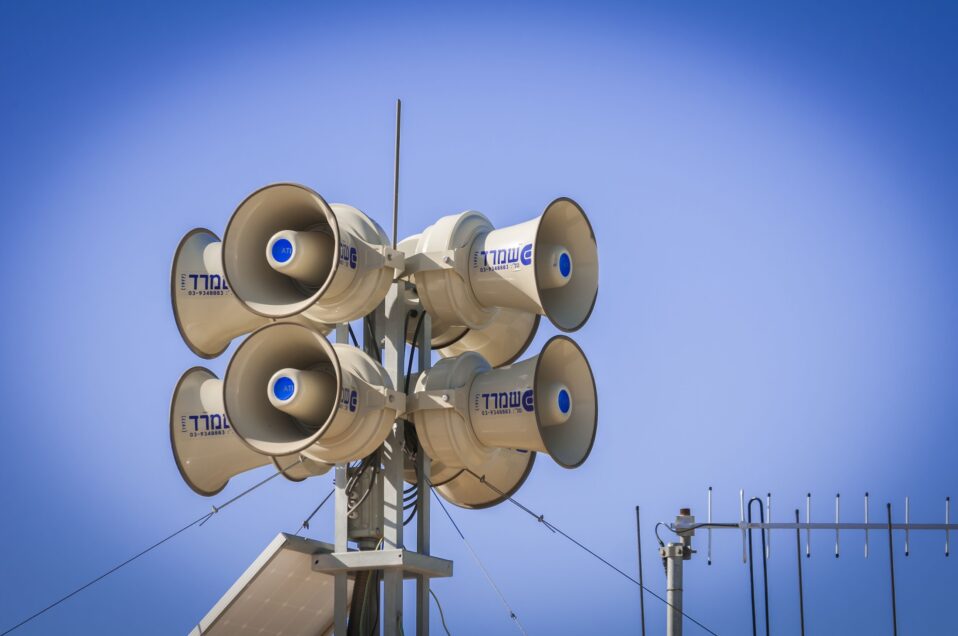 The dreaded yet familiar alarm sounds outdoors and on mobile phones. Several pedestrians sprint toward a bomb shelter at a bus stop. A dad stops his car, jumps out, and dives into the back seat to cover his children. This is not fiction. It is reality for Israeli civilians living in the 50 towns and communities along the 32-mile border with Gaza in southern Israel’s western Negev. The alarm, known as the Red Alert, warns of incoming rocket attacks—and that they have just a 15-second window to find shelter before the explosive lands.

When working for the American Israel Public Affairs Committee (AIPAC), I staffed nine trips to Israel for Christian leaders hosted by AIPAC’s foundation. A day trip south was always important on the agenda. We talked with citizens and officials, visited bomb shelters and kindergartens. In the border town of Sderot, we saw a collection of Qassam rockets that fortunately had exploded in fields. In 2018-2019 alone, Palestinian terrorists fired more than 2,600 rockets into civilian Israeli populations near Gaza—sometimes hundreds a day.

These attacks created a “see-saw” kind of life for Israelis living in this region. Qassam rockets are inexpensive, and although wildly inaccurate and indiscriminate, the rockets generate widespread chaos, fear, and deaths. On one of our trips, a mother shared: “If my husband is away from home, I’m afraid to take a shower. What if the Red Alert goes off? I must save my two young children.”

The Qassam rocket barrages are terror favorites whose frequency has forced Israelis into three wars to defend their citizens, homes and businesses in 2008-2009, 2012, and 2014. Relative quiet follows afterwards for a few years when residents enjoy a somewhat normal life. In between, though, terrorists continue to “invent” more webs of trauma for Israeli parents, children, and the military. In addition to firing off rockets, terrorists have turned kites and balloon “bouquets” into weapons that can float explosives over the border. The resulting fires blacken thousands of acres of Israeli crops. Ashes replace vegetables, charred land replaces green leaves, and the color black replaces fertile golden sands.

On another trip, a kibbutz member showed me a big, beautiful cucumber. Pointing to the fence between Gaza and his kibbutz just steps away, he said, “Right over the fence, no crops are planted. The Palestinians could be growing fertile crops for their own people, but they don’t.” His observation says a lot about the difference between the two peoples.

While inventing airborne terrors, Palestinians ruthlessly used child labor to help dig underground tunnels into Israel. The tunnels were big enough for men to swarm through like killer bees. Thankfully, the IDF has since discovered and destroyed these tunnels. For months during 2018 and 2019, border terror exploded near the Gaza/Israel fence. Thousands of Palestinians set tires ablaze, with thick black smoke pouring over the border every Friday—just in time for the Jewish Sabbath. On one occasion, the number of protestors burning tires and throwing firebombs climbed to 20,000. The Israel Defense Forces (IDF) was forced to use live ammunition to fend off the attacks.

What have Israeli civilians in the western Negev done to deserve this way of life? It is quite simple: the Jews exist.

Israel is often accused of oppressing Gaza’s 1.8 million Palestinians. In fact, not one Jew remains in the Gaza enclave. In 2005, more than 8,000 Jewish people were unilaterally forced to leave their homes and businesses in Gaza, removed by their own IDF under orders from then-Prime Minister Ariel Sharon and the Knesset. At the time, Israel’s leaders hoped that leaving behind thriving businesses like greenhouses would help employ the population. They hoped Palestinians would create a prosperous “Singapore on the Mediterranean.” Instead, Palestinians destroyed almost everything left behind—including the greenhouses—and then elected the terror organization Hamas. Members of Hamas are the “occupiers,” the true oppressors. Unfortunately, the people’s vote invited destruction—with a death knell to their own freedom and prosperity and setting Israel up for more terror attacks.

Here are stark facts about Hamas’s dictatorship. More than 70% of Palestinian Arab Gazans are poor. Electricity is unreliable. Water is not potable. Hamas weapons are purposely stored in apartment buildings, schools, and hospitals since the terrorists know Israelis will not intentionally bomb civilians. Meanwhile, the terror leaders travel on private planes and live, for the most part, in luxurious five-star hotels located in other countries. They line their pockets with riches as they divert investments donated to bettering the lives of Palestinians in Gaza. As Saudi political analyst Abdel Rahman Al-Mulhem bluntly stated last week in the Arabic newspaper Al-Yaum: “Palestinian leaders stole the aid sent to the Palestinian people and built mansions in Washington, Paris and London, while ignoring the suffering of their people.”

Despite these truths, the broader blame for Gazan woes is almost totally aimed at Israel, using slander and lies. Yet, even during violent border demonstrations, balloons, and rockets, Israel sends tons of humanitarian aid into Gaza.

While the Israeli Red Alert app helps save lives by giving a 15-second warning about incoming rockets, it cannot prevent the post-traumatic stress that is rampant among Israeli families, especially in the south. The injustices and emotional distress unfortunately succeed in producing this often-debilitating condition. I personally think Israelis suffer a more intense form of PTS. I call it “Perpetual” Traumatic Stress.

Adele Raemer has lived on Kibbutz Nirim—about a mile from Gaza—since 1975. She is a mother, grandmother, and multi-talented counselor and teacher. I asked Adele, who is a Facebook friend, to share some perspectives for this column. She moderates an important Facebook group called “Life on the Border.” Adele has become a well-known, passionate advocate for all who live next to the terror enclave. In 2019, she was the first Israeli to testify before the U.N. Security Council, and did so at the invitation of Kelly Craft, U.S. Ambassador to the United Nations.

Here are her thoughts today: “Living in Israel is a blessing, but it is also very challenging. Living on the border, about a mile away from the Gaza Strip, is ‘challenging on steroids.’ When it is only yourself, that’s manageable (mad as that may sound). When you are responsible for the safety of numerous young children, or of an elderly parent on a walker, or a disabled person, that ups the stress considerably.”

While some communities are only steps away from the Gaza border, Adele points out, “As we like to say around here, our lives are 95% heaven, 5% hell, because … although terror could happen … at any time of the day or night, most of the time we enjoy clean air, beautiful fields, and forests. We live in communities that are virtually free of worries of traffic and criminal activity.”

Indeed, despite terror and perpetual traumatic stress, Israel’s culture of life, tenacity, and the ability to rise above the worst hatreds and evils demonstrates strength in the midst of sorrow. Israel’s example during tragedy and trauma is a valuable lesson for all of us—about choosing to live not as victims but as victors. It is inspiring.

Israelis are experts at drawing good out of bad, which often ends up blessing the world. For example, Israel is now a world leader in traumatic stress treatment that helps heal broken bodies and spirits.

Adele sums up her outlook for our readers: “Until the situation of their lives over there [Gaza] changes, the safety of our lives and homes remains at risk. Peace can only come to Israel’s south once Hamas allows Gazans to thrive instead of perpetually investing in terrorism. Until they have something to live for, something they will not want to lose, they will only have reasons to die for.”

Join CBN Israel in praying for the people of Israel, especially families and communities on the frontlines of terror:

Here is a fine Bible verse to pray all week and beyond for our Israeli friends: “Fear not, for I am with you; do not look around you in terror and be dismayed, for I am your God. I will strengthen and harden you to difficulties, yes, I will help you; yes, I will hold you up and retain you with My right hand of rightness and justice” (Isaiah 41:10).

Your ticket for the: Red Alert: The 15-Second Window