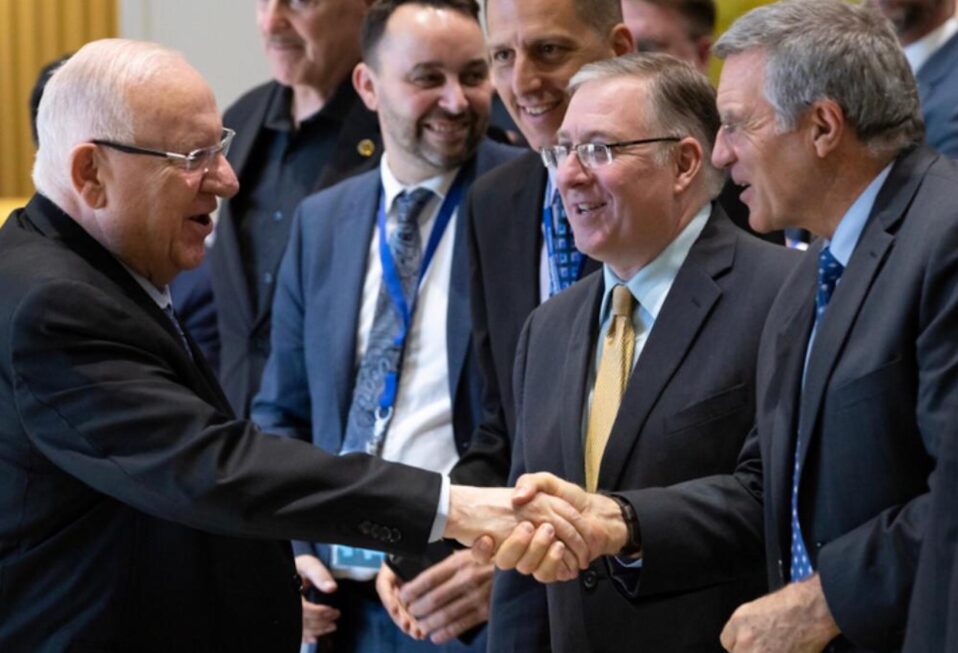 Mistrust of the media is a modern global phenomenon. Yet on October 18, Israel’s Government Press Office (GPO) extended a warm hand of trust to Christian media organizations from across the world. Despite this summit being a virtual Zoom event due to Israel’s pandemic lockdown, the GPO still delivered—for the fourth year in a row—superb information and valuable insights from both Israeli and Christian leaders.

In 2017, when the GPO unveiled its first Christian Media Summit (CMS), it invited 150 top-tier Christian media entities—including founders and CEOs of world-renowned Christian media outlets—to come to Israel for briefings, dialogue, and travel to faith-related locations. Worldwide, approximately 500 Christian media professionals from some 50 countries have participated in the last four years. Well over 100,000 people across the globe watched the GPO’s livestream of the event and God TV’s broadcast.

The GPO’s highly respected Director, Nitzan Chen, opened the summit, greeting us warmly as always. He exhorted us to maintain “the good name of media,” adding that “our honesty and integrity are a jewel in the crown for all of us.” In fact, Israel’s government views Christian media as a vital professional channel of information to Christian tourists, viewers, readers, and Internet users across the globe.

In his annual remarks to the summit, Prime Minister Netanyahu once again emphasized, “We have no better friends than Christian media around the world. You have been with us through thick and thin. You have been extraordinary champions.” In his parting comment, he encouraged us to “keep raising the torch of truth.”

The U.S. Ambassador to Israel, David Friedman, inspired us with one of his Torah readings during Israel’s Rosh Hashanah lockdown. His comments focused on Genesis 25:9, where brothers Isaac and Ishmael buried their father Abraham together. The Ambassador linked it with the recent Abraham Accord: “It’s a universal benefit for people to reconcile. When it happens, we can rejoice.”

Gordon Robertson, CEO of The Christian Broadcasting Network (CBN), discussed Israel’s national symbol, the Menorah, noting, “The Menorah is now outside the Temple, and that is Israel.” He based his remarks on Isaiah 49:6: “I will also make you a light for the Gentiles, that my salvation may reach to the ends of the earth.” CBN and its founder, Pat Robertson, have led the charge for nearly five decades in urging evangelical Christians to stand in support of Israel and the Jewish people.

Today, CBN Israel gives Christians the distinct opportunity to reach millions worldwide with unbiased news and films that tell the true story of Israel while also providing humanitarian relief to Israelis in need—including aging Holocaust survivors, victims of terror, families in crisis, and new immigrants making their prophetic return to their ancestral homeland.

With warm ties now at an all-time high, you may ask how such good will developed between Israel and evangelicals. Simply put, relationships matter. The Christian Media Summit arose out of trust-building between Jews and Christians in the United States, Israel, and among 600 million evangelicals around the world.

This friendship-building began speeding up in 1980, when the International Christian Embassy Jerusalem (ICEJ) planted a seed in Israeli ground. Like institutional “grandparents” of the now numerous Israel-focused Christian organizations, their work for 40 years has grown into a massive oak tree of comfort and practical help, with branches in 90 nations.

Meantime, in 1981, U.S. Pastor John Hagee held the first annual “Night to Honor Israel” in his hometown of San Antonio, Texas. He met with local Rabbi Areyeh Scheinberg to propose his idea. Their friendship and collaboration have endured for 40 years as a model for evangelicals and Jews.

Yet, when the new millennium began in 2000, understandable caution and suspicion about Christians—based on centuries of anti-Semitism—still remained embedded in Jewish communities.

Surprisingly, the horrific Second Intifada—which also began in 2000—became a setting where the warmth factor rose somewhat among Israelis toward evangelicals. The Second Intifada (Arabic for “uprising, rebellion, to shake off”) was a five-year nightmare of grief, agony, and trauma for Israelis. Palestinian terrorists donned suicide vests and used all kinds of violence to murder 1,137 civilians and security personnel. No location was immune to grisly terrorist violence, whether a bus, restaurant or home. The number of injuries soared, with 8,341 Israelis wounded during this prolonged terror campaign.

Within the Jewish population—around 5–6 million at the time—almost everyone knew someone who had been murdered or injured. Tourism came to a virtual standstill. Israelis, if they could, fled the country. Yet despite the violence, one group of visitors continued traveling to Israel: evangelical Christians.

Although many Christian—and Jewish—tours did cancel, enough came anyway to at least be noticeable. During those years, when I worked alongside Goodwill Ambassador Earl Cox, I recall the astonishment among Israelis when they saw our groups of Christians. Going to Israel during an Intifada, during a time of vicious violence, made an unspoken yet powerful statement: “You have friends.”

In the United States, several initiatives unfolded between 2005 and 2007. In 2005 the American Israel Public Affairs Committee (AIPAC), known as the leader in strengthening the U.S.-Israel relationship via Congress, wisely invited Christian leaders to join up with its bipartisan organization. In 2005, AIPAC—a historically Jewish institution—hired a seasoned National Outreach Director from the Jewish community to lay the groundwork. Then in 2006, Pastor John Hagee founded Christians United for Israel (CUFI), and in 2007 AIPAC hired me as its first Christian Outreach Director and continued building its non-Jewish outreach staff.

The mostly Jewish members of AIPAC have embraced its Christian members, who in the last 15 years have developed strong relationships within AIPAC and in the U.S. Congress with both Democrats and Republicans. This has resulted in the added success of key legislation benefiting the U.S. and Israel. AIPAC’s advocacy is considered key in ensuring Israel’s security aid annually. The work of both AIPAC and CUFI has become a driving force of advocacy.

AIPAC’s annual Policy Conference in Washington, D.C., draws 18,000 attendees. CUFI’s 9 million members fully support donations in the millions to Israeli charities. Both organizations host multiple annual tours that promote not only Israel’s spiritual richness but also geopolitical insight into Israel’s issues. Tourism in that country reached its highest numbers in 2019, with 4.5 million tourists spending $6.65 billion. More than half of these were Christians.

With the tremendous growth of engaged pro-Israel Christians in the last 20 years, it’s not surprising that American evangelicals jumped into the last presidential election urging both Donald Trump and Hillary Clinton to sign on to “Five Principles” to support Israel. Key among them: moving the U.S. Embassy to Israel’s capital, Jerusalem.

The International Christian Embassy Jerusalem’s U.S. branch launched the presidential project, naming it American Christian Leaders for Israel. They created an active coalition of hundreds of top evangelical leaders in 2015. They first sent a Letter of Principles to both candidates. The Clinton campaign never responded. They heard from Trump’s campaign almost immediately. Now, since President Trump’s win in 2016, his policies toward Israel are legendary.

It’s clear that Christian media and 600 million evangelicals worldwide will remain dedicated to Israel’s well-being. Not because Israel or any other nation is perfect. But because Christians serve a perfect God who offered us redemption through the Jewish people as vessels for our Bible and our precious Jewish Savior. We have every reason we need for our loyalty.

Let’s pray that Christian support for Israel will be strengthened like never before:

What a powerful alliance the evangelical-Israeli partnership continues to be. Let us always hold fast to this certainty: “How good and pleasant it is when God’s people live together in unity!” (Psalm 133:1).

Your ticket for the: Not Fake News: Israel Holds its Fourth Christian Media Summit