Abraham Accords Agreement Welcomes Sudan into the “Circle of Peace” 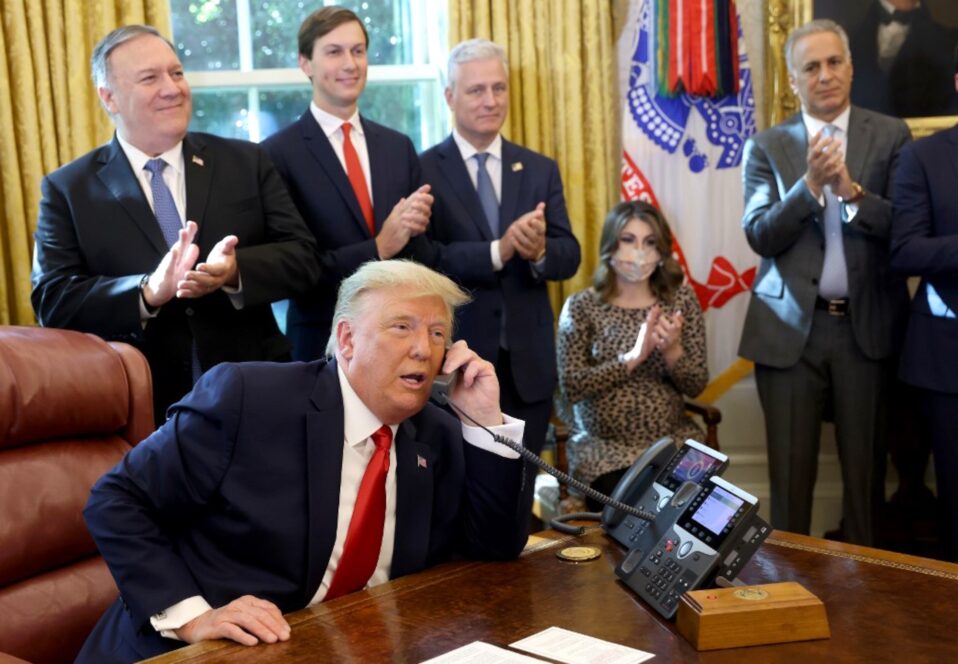 President Trump’s foreign policy is dramatically reshaping the Middle East. The intensely complex, conflict-ridden region is moving into a new era. On a conference call in the Oval Office on October 23, Trump announced Sudan’s entry into the Abraham Accords Peace Agreement. Gratified about “peace in the Middle East without bloodshed,” President Trump called Sudan “a new democracy” and broached the possibility of including five more Arab nations into the fold.

During that three-way telephone conversation from the Oval office, Israel’s Prime Minister, Benjamin Netanyahu, called the Abraham Accords a “circle of peace.” Since September 15 of this year, three Arab countries have now normalized relations with the Jewish state: first the United Arab Emirates (UAE), then Bahrain, and now Sudan.

Reporters on hand in the Oval Office asked Prime Minister Netanyahu about the benefits of the Accords. He mentioned the already active plans in the areas of tourism, technology, and trade with UAE and Bahrain. To the President Trump’s remarks that “the same thing is going to happen with Sudan. … It changes the lives of people,” Netanyahu responded, “Exactly as you said, Mr. President. We’re not engaging in bloodshed. We’re not engaging in antagonism. We’re engaging in cooperation. … It’s not a distant vision. It’s not a distant dream. … We’re actually seeing the fruits of peace right now. … We’ve never seen anything like it.”

In thanking President Trump for brokering the peace agreement, Sudan’s Prime Minister, Abdalla Hamdok, pointed out, “We’re about to get rid of the heaviest legacy of Sudan’s previous, defunct regime. I should reiterate that we are peace-loving people and have never supported terrorism.” He hopes that his once-reviled country will now become a respected nation.

Prime Minister Hamdok was referring to Sudan’s pock-marked history that has been deeply scarred by its terrorist-Islamist President, Omar al-Bashir. Thrown out in 2019, he is finally in prison and standing trial. The International Criminal Court is indicting al-Bashir with crimes against humanity, war crimes, and genocide—the first head of state to be so charged. In the meantime, Sudan’s current regime is a shaky one, shared by two leaders: Lt. General Abdel Fattah al-Burhan and his civilian counterpart, Prime Minister Hamdok. Al-Burhan is set to cede control of the transitional Sovereignty Council to Hamdok in 2022.

Sudan’s transition to a civilian, democratic government is frankly miraculous, and in numerous ways. While optimism was on full display during the Oval Office conference call, Sudan’s shocking history will pose knottier challenges for the peace agreement to move forward. Sudan’s former President, Omar al-Bashir, ruined Sudan during his reign of terror from 1989 until 2019 when he was deposed. A civil war that took place in western Sudan, the Darfur Genocide is tragically cited as the first genocide of the 21st century. Figures vary, but some show that 2.5 million people were murdered, including 1 million children who were brutally tortured, raped, or killed.

A second civil war took place in Sudan’s south, a more ethnically diverse part of the country. After 20 years of war, South Sudan became an independent country in 2011. By that time, 1.5 million people had been killed and 4 million displaced. The nation’s current population of 10 million is mostly Christian and animist.

Sudan’s population today is more than 41 million, mostly Sunni Muslims. Upwards of 2 million Christians live there, with Catholics and Protestants in the majority along with 100,000 Orthodox Christians. The country’s history dates back to the Bible, which calls Sudan by varying ancient names such as Kush (Cush), Nubia, and Havilah. For example, Genesis 2:11-12 mentions Nubia as rich in gold, bdellium and onyx. Some scholars even believe that this area was the southwestern boundary of Eden, a vast well-watered land in between the Tigris and Euphrates Rivers. And Numbers 12:1 tells us that Moses married a Cushite woman.

Thus far, Sudan is the largest nation geographically in the Abraham Accords and sits on Egypt’s southern border. Protests for democracy began in 2018, and in 2019 the military overthrew al-Bashir. The country began to see shafts of light in their 30-year cavernous hole of darkness.

Sudan is no longer constitutionally dominated by Islamic laws and it assures freedom of religion. The interim Sovereign Council now has a Christian woman as a member. Yet, even after al-Bashir’s ouster, unrest and instability persisted. In addition, Christian persecution remained rampant—with murder, discrimination, and arson strikes against this minority population. In 2019, the U.S. Commission on International Religious Freedom (USCIRF) recommended a special envoy to help Sudanese Christians during the transition to democracy.

The USCIRF is chaired by Tony Perkins, President of Family Research Council. He praises the appointment of Donald E. Booth as special envoy to Sudan. For years Christians were not allowed to march at Christmas, but when December 25 was declared a public holiday last year, Sudanese Christians marched with joy. Of this jubilant expression of religious liberty, one pastor exclaimed, “How great is freedom!”

Another set of miracles surrounds Sudan’s history with Israel. In 1967, Sudan hosted the Arab League in its capital, Khartoum, after Israel won the 1967 Six-Day War. The League passed the Khartoum Resolution, which famously contains “The Three No’s”—no peace with Israel, no recognition of Israel, no negotiations with Israel. In Netanyahu’s announcement to Israelis from his Jerusalem office last week, he commented that Khartoum’s three “no’s” had become three “yeses” of peace. “Today, Khartoum has said, ‘yes to peace with Israel, yes to recognition of Israel, and yes to normalization with Israel.’ This is a new era. An era of true peace.”

Prior to finalizing the negotiations, President Trump mandated that Sudan first pay $335 million to U.S. terror victims and families. He tweeted, “Once deposited, I will lift Sudan from the State Sponsors of Terrorism list. At long last, justice for the American people and big step for Sudan!”

A big step, indeed. The U.S. government had pressed this issue with Sudan for 25 years, due to a direct al-Qaida connection. Osama bin Laden had lived in Sudan for five years in the 1990s. His al-Qaida network perpetrated two terror attacks that killed 700 Americans. Sudan was already included on the terrorist list in 1993—with sanctions—due to its support for jihadists. Sudan is listed as one of four State Sponsors of Terror—with Iran, North Korea, and Syria. A U.S. President has the power to lift the designation, and Congress has 45 days to object if it wishes. In an interesting aside, Spanish politician Josep Borrell Fontelles, a diplomatic High Representative of the European Union, tweeted: “US intention to lift the State Sponsor of Terrorism designation of #Sudan is momentous.”

Please join us in praying for Sudan as it joins the “circle of peace” with Israel:

Yes, momentous events are unfolding in Sudan. Yet our prayers must reflect the complicated realities ahead. Let us include Genesis 2:11-12 prayers asking God to restore modern Sudan’s ancient Nubian prosperity akin to rich in gold, bdellium and onyx.

Your ticket for the: Abraham Accords Agreement Welcomes Sudan into the “Circle of Peace”

Abraham Accords Agreement Welcomes Sudan into the “Circle of Peace”