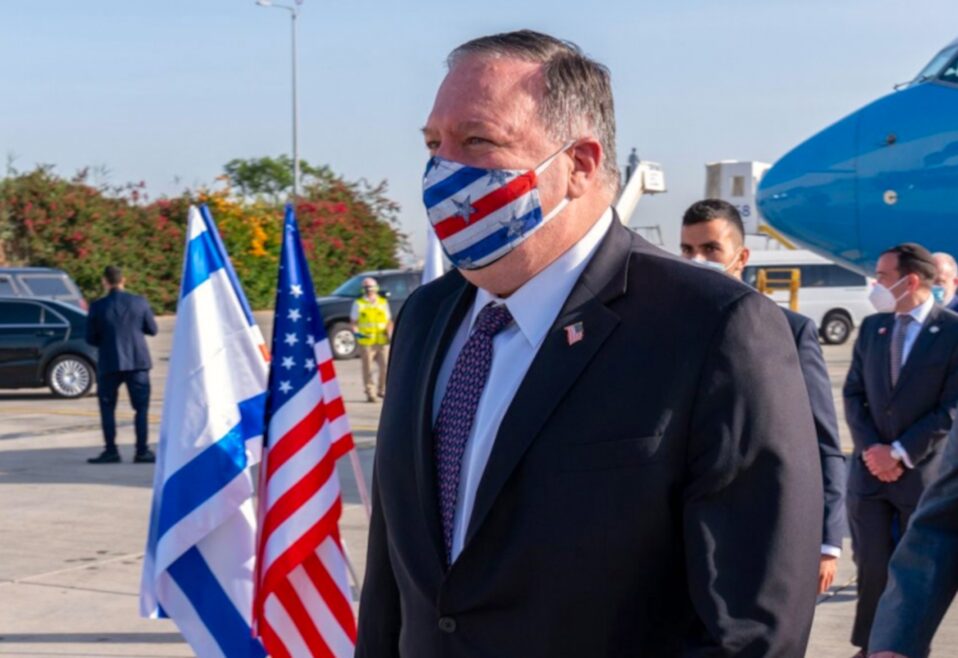 When Mike Pompeo stepped onto the soil of the Binyamin region in Israel’s biblical heartland last week, the importance of that event generated a dramatic course correction. Pompeo’s visit was a diplomatic earthquake. It is the first time a U.S. Secretary of State had ever visited Judea and Samaria.

The eruption that ensued comes after a bitter, decades-long tug-of-war over Palestinian claims and Israel’s rightful property. The United Nations, Palestinians, and European Union—all possessing a strong anti-Israel bias—were outraged by the visit. Most of the world calls the region the “disputed territories,” “occupied territories,” or the politically correct “West Bank,” since it lies west of the Jordan River.

To better understand the hostility—and what the dispute is about—let’s consider the history of the region. The heartland issue has been a source of relentless conflict since 1967, when Israel won the Six-Day War against Egypt, Syria and Jordan. In the aftermath, Israel reclaimed Judea and Samaria, which had been under Jordanian rule since 1948—when Arab armies seized these lands right after Prime Minister Ben Gurion declared Israel’s statehood. And in November 2019, a foreshadowing of last week’s upheaval occurred when Mike Pompeo announced the stunning reversal of U.S. policy under the Trump administration regarding the Jewish heartland (“settlements”): “The establishment of Israeli civilian settlements in the West Bank is not perceived per se as inconsistent with international law.”

Indeed, the focus of anger is wrapped around the “two-state solution,” which has served as the holy grail of Middle East diplomacy since 1993. The two-state solution to the Israeli-Palestinian conflict envisages an Independent State of Palestine alongside the State of Israel, west of the Jordan River. At that time, Israel and the Palestinian Liberation Organization (PLO) agreed to the Oslo Accords, under which the PLO finally recognized Israel’s right to exist. The slogan of the two-state solution—“two states for two people living side by side in peace”—has echoed emptily through the decades with more failures at the Wye River meetings, the Camp David Summit, and the Saudi Peace Plan, among other exasperating, dead-end efforts.

The two-state solution, originally called the Partition Plan, was agreed upon by the United Nations on November 29, 1947. Israel accepted the plan, and the modern Jewish state became a reality on May 14, 1948. The Arabs rejected the plan outright and they are still stateless. (Inflexibility has been their hallmark over the years.) The United Nations readily joined in with one of its many wayward resolutions, in concert with its International Court of Justice, in 2004 pronouncing the “settlements” illegal. Like other nations, Israel relies on its own judiciary, which—as Secretary Pompeo noted—“confirmed the legality of certain settlement activities.” Fifteen judges—among them Arabs, Jews, and Muslims—receive appointments to Israel’s Supreme Court.

After 1967, Jews began increasing their population in their biblical heartland, where today Israeli residents number more than 600,000. The thriving Israeli towns are called “settlements” by most. If you have not been there, the word might bring up images of tents, simple homes, and a very basic lifestyle. I’m guessing that when Secretary Pompeo visited Binyamin, a town of 5,000—with its boutique wineries, bike trails, restaurants, and orchards—he came away with a very different impression. I’ve visited the so-called “settlements.” They are bustling, robust towns filled with schools, synagogues, small businesses, manufacturing, sports teams, and lovely homes with red-tiled roofs and gracious gardens. Ariel, called the “capital of Samaria,” is one of the largest towns in the Binyamin region, with a population of 20,000. Ariel University is attended by 16,000 Palestinian and Israeli students. Many of the towns sit on land populated by Jewish villages in ancient times 2,000-3,000 years ago. Samaria is geographically north of Jerusalem, and Judea lies to the south.

The modern Jewish towns of Judea and Samaria provide an attractive lifestyle. And like scattered puzzle pieces, Palestinian towns dot the biblical heartland with a population of around 2 million Arabs. Many thousands of Palestinians enjoy the advantage of having good jobs at hundreds of Jewish-owned manufacturing plants in the region. Yet the Jewish enclaves are forced to maintain a strong security presence with an ever-vigilant citizenry to prevent terror attacks and the destruction of property. On the occasions I’ve visited towns in the region, I entered through a security gate with armed citizens posted. Why? Palestinian terrorists have breached community security fences, invaded homes, and killed families.

Despite the Jews’ long presence in the Middle East—and the many modern-day benefits to those who live within its borders—anti-Israel bias is profound and seems to be nearly ubiquitous. Human Rights Watch (HRW), founded in 1978, investigates dictatorial governments oppressing their people and aids refugees and populations in crisis worldwide. The 450-member staff from 70 nations performs enormously valuable work. They have called out Hamas in Gaza and the Palestinian Authority for torture practices and for curtailing dissent against their own people. But in a contradiction both to realities on the ground in Israel and to biblical history, when it comes to Israel their position is extreme: “Israel should cease its violation of international humanitarian law by removing its citizens from the West Bank.”

Israel’s policies are not perfect, but the Palestinian adherence to hating Jews, paying terrorists’ families, and refusing direct negotiations with Israel for the last ten years makes peace in the region elusive. Israel has no partner for peace.

Removing the Jewish population from Judea and Samaria—as HRW and others demand—goes against Israel’s ancient history, the Bible, and the countrywide archaeological proof of Israel’s deed given by the God of Abraham, Isaac, and Jacob. For example, the Binyamin region that Secretary Pompeo visited is of huge significance, as it is the location of ancient Shiloh—the first capital of the Israelites 3,000 years ago. Although Mr. Pompeo didn’t go to Shiloh, 120,000 pilgrims visit the historic city annually. God explicitly comments in Jeremiah 7:12, “Go now to My place that is in Shiloh, where I caused My name to rest at first…” The Ark was placed in the Tabernacle and remained there for 369 years. It was here that Eli the priest lived, Hannah prayed for a son, and Samuel served as the legendary prophet. Today, a Jewish community of 4,000 people lives in Shiloh, where they run businesses, host pilgrims at their museum and educational center, and send their children to school.

Throughout the Bible, God’s deed to the Jews is repeatedly emphasized in no uncertain terms. The Jews are Israel’s native people, living in their ancestral homeland then and now—codified in a sacred, eternal deed. In Genesis 15:18-21, God announced to Abraham: “I will assign this land to your offspring.” God outlined His plan clearly and made a permanent agreement with Abraham and his son of promise, Isaac. God also made it clear in Genesis 17:20-21 that He planned to bless Ishmael, the father of Arab peoples. God has kept His covenant with Jews and His promises to Arabs.

Secretary of State Mike Pompeo agrees with the Bible. You may not be aware that he and his wife Susan are devoted followers of our Lord Jesus. His resume includes sterling qualifications for his current position, yet his spiritual resume guides his life. He encountered the Lord at West Point when two of his classmates shared Jesus’ life-changing message with Cadet Pompeo. Like many young people, he grew up going to church but had not grasped the depth of a relationship with the Lord.

Pompeo was Valedictorian in his class at West Point, then served as a U.S. Army Captain patrolling the Iron Curtain before the fall of the Berlin Wall, as his bio states. Afterwards, he earned a Harvard law degree and was editor of the Harvard Law Review. He owned several businesses, and then Kansans elected him to the U.S. House of Representatives. President Trump first named him CIA Director and then, in 2018, Secretary of State.

His representation of the Trump Administration’s policies has vaulted him into even loftier achievements. He has interacted with the North Korean leader and most recently was deeply involved in the negotiations for the Abraham Accords Peace Agreement, which has reshaped the Middle East in a miraculous way. He convened the Commission on Unalienable Rights to advise him on human rights issues. In a first, he also organized an all-day conference on religious freedom that was attended by 80 foreign dignitaries. Focusing on persecution of all religious minorities, the conference resulted in several practical remedies to address religious liberty violations.

Pompeo has drawn condemnation for his faith-based comments and his conservative principles. In speeches, he’s been forthright about his values, saying, “As a Kansan, I hold a deep reverence for the sanctity of life, the solidarity of family, and the solemnity of marriage. … I am, and always will be, pro-life and will defend life from conception to natural death. I will continue to oppose any taxpayer funding for abortion. I also fully support the traditional institution of marriage.”

For evangelicals who care about Israel and hold to conservative biblical principles, Mike Pompeo is a highly favored and respected official. His part in helping enact the U.S. Embassy move to Jerusalem, Israel’s sovereignty in the Golan Heights, the development of the Abraham Accords, and his visit to the biblical heartland amount to a treasure trove of benefits for the United States, Israel, religious minorities, the Middle East, and beyond.

Pompeo and his wife also visited the Golan Heights, which the Trump administration had recognized as being under Israeli sovereignty—not Syrian. It’s another course correction, one that’s rooted in the Bible in Deuteronomy 4:43. It’s called Golan in Bashan and is assigned to the tribe of Manasseh. In the Golan, Pompeo observed, “This is a part of Israel and central part of Israel.”

In an earlier press conference with Prime Minister Netanyahu, Pompeo heralded an additional policy. “The State Department will declare as anti-Semitic the global Boycott, Divestment and Sanctions (BDS) movement.” (By definition, BDS is economic warfare against Israel.) In practical terms, this course correction means that products from Judea and Samaria can now be labeled as “Made in Israel,” “Product of Israel,” or “Israel.” It’s a major change from the past since, for example, last November, the top court in the European Union ruled that they would not accept a “Made in Israel” tag. The U.S. administration’s policy will now apply to Israeli goods that are under Israeli civil and military control. Those who decry the “settlements” condemn the U.S. decision since for years they have viewed this as infringing on the rights of Palestinians.

From his faith and his comments, it is easy to believe Mike Pompeo when he remarks, “Israel is our closest friend in the Middle East. My evangelical faith shapes my work.”

Please join CBN Israel this week in fervent prayer for the Jewish State:

May we continue to remember and be encouraged by God’s promise:

“I am giving all this land, as far as you can see, to you and your descendants as a permanent possession” (Genesis 13:15).

Arlene Bridges Samuels pioneered Christian outreach for the American Israel Public Affairs Committee (AIPAC). After she served nine years on AIPAC’s staff, International Christian Embassy Jerusalem USA engaged her as Outreach Director part-time for their project, American Christian Leaders for Israel. Arlene is now an author at The Blogs-Times of Israel and has traveled to Israel 25 times. By invitation, she has attended Israel’s Government Press Office Christian Media Summit three times. She hosts her devotionals, The Eclectic Evangelical, on her website at ArleneBridgesSamuels.com.

Your ticket for the: Mike Pompeo: the 70th United States Secretary of State and True Friend of Israel