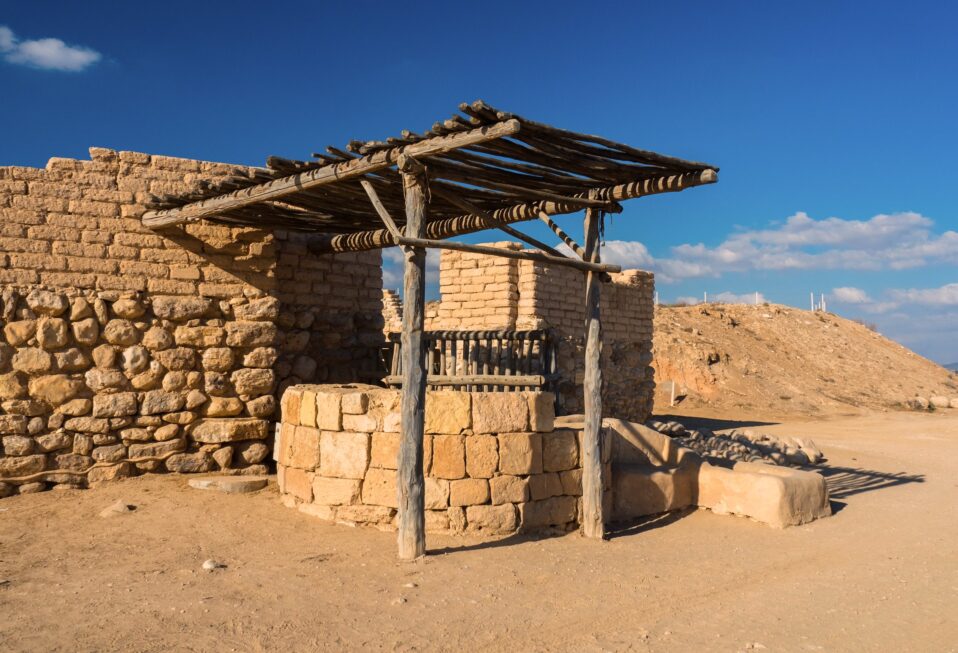 The site of Beersheva figures prominently within the Patriarchal stories of the Old Testament, particularly with Abraham. It also became the defining limit of the southern extent of the kingdom of Israel, from Dan to Beersheva (1 Samuel 3:20; 17:11; 24:2; 1 Kings 4:25). According to Genesis (21:31), the name of the place derived from an oath between Abraham and Abimelech; the name Beersheva means “the well of the oath.”

The ancient tel (mound) of Beersheva sits in the Beersheva Valley, east of the modern city of Beersheva in the western part of the biblical Negev. When the Bible refers to the Negev, it means the valley that runs east-west across the southern Hill Country. This valley is known as the Arad-Beersheva valley. The lands south of this valley, the wilderness of Zin (Numbers 20) and the wilderness of Paran (Numbers 10:12; 12:16; 13:3, 26), lay outside of biblical Israel. This can confuse modern travelers to Israel because the land from the Beersheva Valley south to the Gulf of Elat is identified as the Negev today, and it resides within the modern State of Israel, yet the land south of the Beersheva Valley, the biblical Negev, lay outside the biblical land of Israel.

Beersheva functioned as an important hub between Egypt and the Judean Hill Country. It also served as a juncture for east-west trade routes. Its important location, along major roadways, underscores its importance within the biblical stories, especially the Patriarchal stories, since, as nomadic herdsmen, the Patriarchs moved between the Judean Hill Country, the Negev, and Egypt.

From Beersheva, Abraham sent Hagar and Ishmael into the wilderness of Beersheva, after the birth of Isaac (Genesis 21:8-20). God revealed himself to the Patriarchs at Beersheva (Genesis 26:24-25; 46:1-2); it continued to function as a place of religious activity, even into the periods of the kingdoms of Israel and Judah. The prophet Amos condemned the pagan rites held at Beersheva, along with those at Dan, Bethel, and Gilgal (Amos 5:5; 8:14). Archaeological excavations uncovered a four-horn altar at Beersheva made of hewn stone, which God forbade in the Torah. This altar had been dismantled in antiquity, most likely due to the religious-political reforms of King Hezekiah.

Abraham and Isaac both struggled with Abimelech, king of Gerar, over water rights in the region (Genesis 21:22-34; 26:15-33). Samuel’s sons, Joel and Abijah, judged Israel from Beersheva (1 Samuel 8:1-2). The city belonged in the tribal territory of Judah and Simeon (Joshua 15:28; 19:2; 1 Chronicles 4:28). The prophet Elijah passed through Beersheva on his journey to Mount Horeb when he fled from Queen Jezebel (1 Kings 19:3). Upon the return of the Judean exiles from Babylonian captivity, Beersheva served as the southernmost point of settlement by the Judeans who returned to the land, “from Beersheva to the valley of Hinnom [which is in Jerusalem]” (Nehemiah 11:30).

The current ancient site of Beersheva preserves a city from the mid-twelfth century to the end of the eighth century B.C. This time period coincides with the period of the kingdoms of Israel and Judah. Nothing at the site dates to the period of the Patriarchs. The city served as an administrative center; the houses of the city, built one next to the other, formed the city wall by the back wall of the houses. Large storehouses, for the storing of grain, were uncovered attesting to the region’s agricultural potential, as well as a land for grazing flocks of sheep and goats. The water-system proves rather ingenious as rain was captured and funneled into the large water cistern, which provided water for the city year-round. Outside the ancient gate complex sits a well, which remembers the name of the site and the story of Abraham and Abimelech’s oath.

Your ticket for the: Biblical Israel: Beersheva