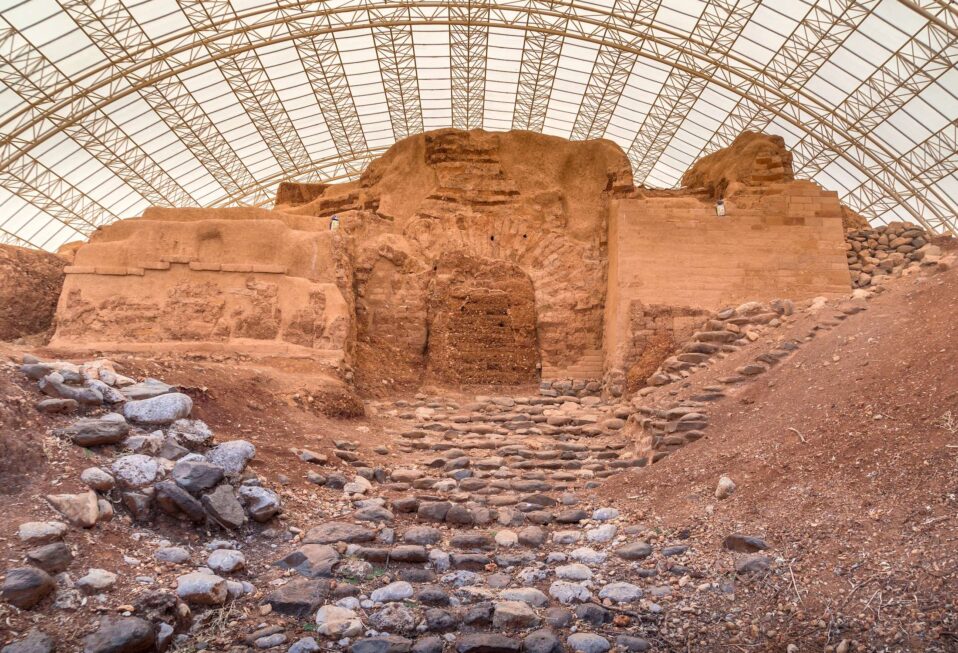 The Bible identifies Dan as the northernmost point of ancient Israel (Judges 20:1; 1 Samuel 3:20). The site of Dan sits at the southern base of Mount Hermon, in the upper portion of the Jordan River Valley, at the juncture of the ancient north-south and east-west caravan routes. Its location at the Dan springs, one of the three headwaters of the Jordan River, meant that the site experienced an abundance of water and vegetation.

Within the Bible, the site was originally called Laish (or Leshem; Genesis 14:14; Joshua 19:47; Judges 18:29). Its name changed to Dan when the tribe of Dan had to relocate due to their inability to remain in their tribal territory, which lay in the Plain of Philistia. The Danites migrated to the north of the land, conquered Laish, and renamed it Dan (Judges 18:11-31).

Excavations at Dan have uncovered a number of significant finds that illuminate the world of the Bible. Around the 18th century B.C., the people of Dan constructed a large city gate out of mudbricks on the eastern side of the city. The gate has four towers, a pair on each end. The entrances to the gate, which were only used for a few generations before it was sealed, is in the shape of a triple arch. This gate complex dates to the period of the biblical Patriarchs (Abraham, Isaac, and Jacob).

Excavators also uncovered the Israelite high place of Dan. This offers the largest excavated monumental temple complex from the kingdom of Israel. Jeroboam I wanted to keep the Israelites from making pilgrimage to the Temple in Jerusalem. He feared the religious allegiance of the people would also draw their hearts to the house of David that ruled the southern kingdom of Judah (1 Kings 12:25-30), so he established two central cultic places of worship in Israel at Bethel and Dan. The author of Kings views Jeroboam’s actions as the “sin of Jeroboam” from which the northern kingdom never recovered.

The high place at Dan has three phases of development. The first dates to the period of Jeroboam I. This phase was destroyed by a conflagration, which excavators suggest happened due to the attack of the Aramean king Ben-Hadad (1 Kings 15:16-20). The second phase dates to the 9th century B.C. This phase enlarged the area and used finely cut limestone ashlars. It also included chambers erected around the temple podium and altar to serve the priests in their duties. This phase the excavators date to the reign of King Ahab. The final phase dates to the reign of Jeroboam II, with minor alterations to the previous phase. The high place continued to be used into the Hellenistic and Roman periods.

Excavations also revealed a large gate complex dating to the 9th-8th centuries B.C. This gate complex contains a dais where the king or local governor could sit to adjudicate the requests of the people (see 2 Samuel 19:9). In the area of the gate, archaeologists discovered the fragments of a stela written in Aramaic likely placed there by Hazael, king of Aram-Damascus. The inscription mentions the king of Israel and a king of the “House of David” (see 2 Samuel 7), possibly Ahaziah, who was killed along with Joram, king of Israel, in the revolt of Jehu (2 Kings 9-10).

Your ticket for the: Biblical Israel: Dan