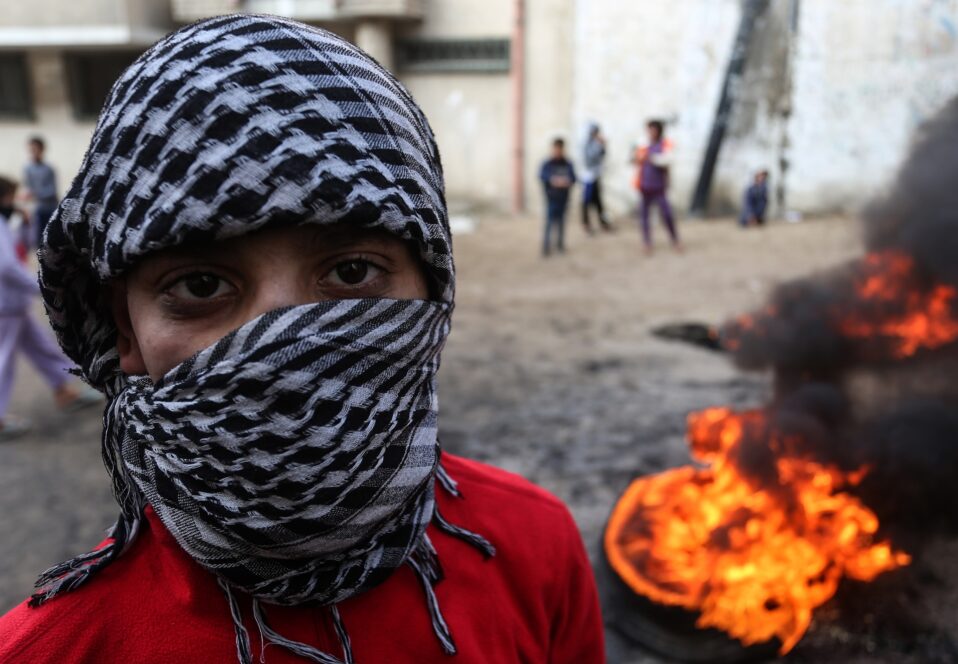 The world marked another International Day Against the Use of Child Soldiers just a few weeks ago on February 12. Yet the Palestinians repeatedly violate this worthy United Nations and UNICEF-sponsored goal in their textbooks.

Shaping young minds with erroneous history and facts is a mental “blunt instrument” that diminishes the bright minds and futures of Palestinian children. How does that happen? By filling these impressionable students with hatred against Israelis—using deliberate misinformation in textbooks—they hope to influence them to become human weapons against the Jewish population.

Responsibility for such disturbing activity lies at the feet of the Palestinian Authority (PA) and the United Nations Relief and Works Agency for Palestinian Refugees (UNRWA). Instead of training children to grow up in peace, these two entities call for them to “defend the motherland with blood” and to “annihilate the remnants.”

Israel’s Institute for Monitoring Peace and Cultural Tolerance in School Education (IMPACT-se) pioneered what they call textbook analysis, not only in Palestinian textbooks but those in other cultures and nations. After studying more than 150 Palestinian textbooks, this non-governmental organization published a recent report finding evidence of incitement and violence against Israel and the Jewish people. UNRWA, which promised by September 2020 to remove all the dangerous teaching, has not completely kept their word.

In fact, UNRWA has been distributing home study materials to Palestinian families that do anything but promote peace. Special packets were disbursed during the coronavirus shutdowns. In fact, they were found to violate UN standards, UNESCO guidelines, and UNRWA’s own stated principles. They claimed it “mistakenly” gave children textbooks calling for jihad.

But clearly, the PA and UNRWA are still setting children on a path of bitterness and danger.

As part of its study, IMPACT-se has compiled examples that promote martyrdom and violence against their “enemy” Israel. For instance, a reading comprehension story describes a Molotov cocktail on a bus full of Jewish civilians, calling it a “barbecue party.”

The UNRWA books also include distorted maps in a seventh-grade textbook. The maps remove Israel—calling it only “Palestine”—with its borders listed as Lebanon, Syria, Jordan, and Egypt. In reality, while many nations view “Palestine” as a country, under international law it is not yet legally a state since it has not met all the prerequisites.

IMPACT-se CEO Marcus Sheff pointed out about UNRWA: “It does not appear that the organization is institutionally capable of fulfilling its basic duty of care to the children in its schools. Donor countries need to start asking much more pointed questions of UNRWA if they want to stop financing this ongoing hate teaching.”

Donor countries are doing just that—including Canada, Norway, the European Union, and others. For the last few years, many have already reduced their donations to UNRWA. Since the IMPACT-se report came out, member nations are again questioning, reducing, or stopping their financial aid altogether. During the Trump presidency, U.S. funding was stopped. However, the Biden administration is set to reinstate donations to UNRWA and the PA.

Other organizations are also tracking vital facts. Added investigations from the non-governmental Palestinian Media Watch (PMW) have, since 1996, translated Arabic into English to monitor what is really being published and broadcast. In 2012, PMW reported a shocking post on a Lebanese Facebook page. What you read here is not an isolated attitude:

“She shed a tear that hurt my heart and said: ‘The homeland needs you, son. Go and blow up the Sons of Zion.’ I said to her: ‘Why me and not you?’ She said: ‘I will stay in order to give birth to more children for the sake of Palestine.’ I kissed her hand and said to her: ‘Keep it up, mother, for you and for Palestine I will kill the impure and the damned.’”

More than a quarter-million Palestinians live in Lebanon. Who knows how many have seen this appalling post?

As a non-profit Israeli research organization, PMW has educated legislative bodies and leaders worldwide with the troubling truths. PMW was the first to expose and report the financial rewards paid to families of Palestinian “martyrs” (terrorists)—a diabolical reward system called “pay to slay.” The PA pays hundreds of millions of dollars to families—and even Palestinian prisoners—to glorify and reward terror. The PA fills its terror coffers every year using donations from many nations, including the United States.

PMW’s research opened the door in the 115th Congress to significant legislation to pass the Taylor Force Act in 2017-2018. Taylor, a 28-year-old U.S. army veteran with tours in Iraq and Afghanistan, was murdered in a Tel Aviv terror attack in March 2016. Bottom line, the bill bans “certain financial contributions lasting from 2018-2023 that directly benefits the Palestinian Authority.” In other words, the Act prohibits paying terrorists and their families for murder until they stop “Pay to Slay.”

In a heartening bipartisan vote on the Taylor Force Act in 2018, the U.S. House of Representatives voted 256-167, followed by the Senate’s 65-32 vote. The Force family was represented by Israeli attorney Nitsana Darshan-Leitner, founder and CEO of Shurat Hadin—the Israel Law Center. She remarked, “It will lead to the end of the Palestinian practice of ‘rewarding murder and terrorism.’” With IMPACT-se, Palestinian Media Watch, and other organizations diligently monitoring the facts—and governments acting on those facts—we must pray that her words will come true. Israel also passed “Anti-Pay-for-Slay” laws, along with many other countries, which set out to end the common practice by the PA to reward terrorists for killing innocent Israelis.

With less money donated to the PA, it is difficult to understand why Mahmoud Abbas, president of the PA, would keep his deadly financial policies. The Modern War Institute at West Point offers these reasons about maintaining Pay to Slay—that it is “politically useful to the PA. It ensures that Israel, as well as other nations, take Fatah seriously due to the threat of violence. It also serves to keep a restive Palestinian populace focused on an external enemy instead of on the cronyism, authoritarianism, and corruption inherent in the PA. After decades of occupation, Palestinians likely feel convinced that the only way to obtain independence is through violence, and the PA is all too happy to help them continue to feel that way.”

Mahmoud Abbas’s 16th year (of what was supposed to be a four-year term) qualifies him as a dictator, for other reasons as well. We cannot forget that Palestinian hate-laden textbooks and media also fill children’s minds with the responsibility to become martyrs. The following quote from Andrei Sakharov (1921-1989) is profound. This Russian nuclear physicist, dissident, Nobel laureate, and activist for disarmament, peace, and human rights stated:

Sakharov’s quote expertly explains long-time Palestinian opposition to peace with Israel and ill-treatment of its citizens—men, women, and children.

Join CBN Israel to pray with thankfulness for facts emerging from reliable organizations that expose the mind-altering abuse of Palestinian children:

I leave you with this sobering and troubling statement by IMPACT-se CEO Marcus Sheff: “UNRWA is complicit in radicalizing schoolchildren through the glorification of terrorists, encouragement to violence and teaching of blood libels to Palestinian schoolchildren.”

Your ticket for the: Palestinian Textbooks Incite Violence Against Israel