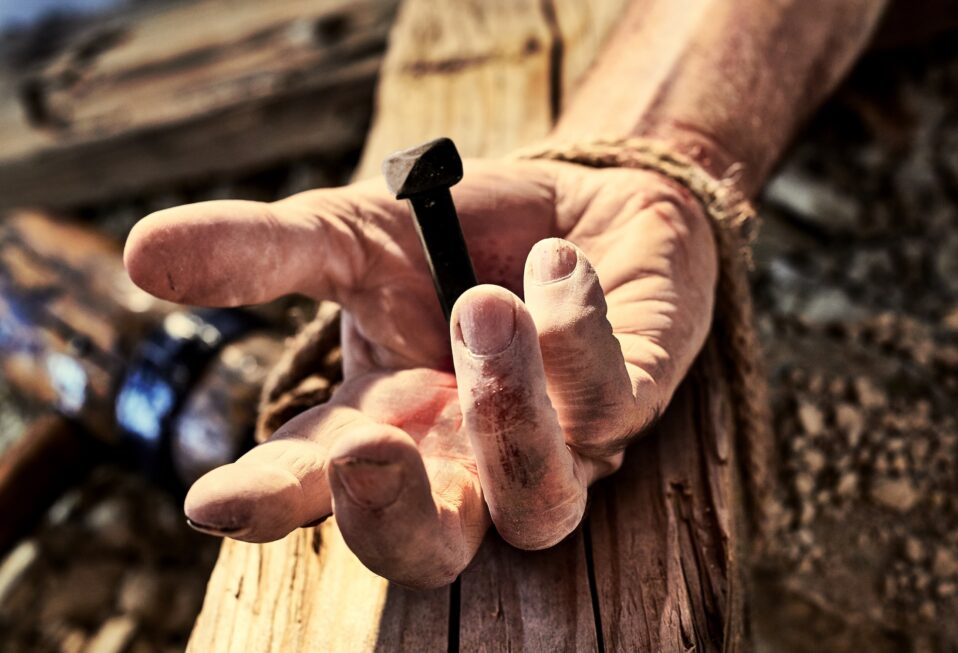 “And when they had come to the place called Calvary, there they crucified Him, and the criminals, one on the right hand and the other on the left. Then Jesus said, ‘Father, forgive them, for they do not know what they do.’ And they divided His garments and cast lots. And the people stood looking on. But even the rulers with them sneered, saying, ‘He saved others; let Him save Himself if He is the Christ, the chosen of God.’ The soldiers also mocked Him, coming and offering Him sour wine, and saying, ‘If You are the King of the Jews, save Yourself.’ And an inscription also was written over Him in letters of Greek, Latin, and Hebrew: ‘This is the King of the Jews.’ Now it was about the sixth hour, and there was darkness over all the earth until the ninth hour. Then the sun was darkened, and the veil of the temple was torn in two. And when Jesus had cried out with a loud voice, He said, ‘Father, into Your hands I commit My spirit.’ Having said this, He breathed His last” (Luke 23:33-38, 44-46 NKJV).

Crucifixion was one of the most cruel, painful, and humiliating forms of capital punishment ever devised, and the Romans perfected it. They reserved it for non-Roman citizens, slaves, heinous criminals, and enemies of the state. The Gospel writers—the entire New Testament, for that matter—did not delve too much into the details of crucifixion because most people in the first century had seen a crucified victim, and the sight elicited such horrors that it was not something to write about.

The crucifixion of Jesus was intended to be an outright mockery of Jewish hopes of redemption. The Jews had just celebrated Passover, the festival of liberation and freedom. So why did Pilate need to crucify anyone during Passover? This brutal act was his deliberate way of reminding the Jews in Jerusalem who, in fact, was in charge. His message was clear and simple: You may have celebrated redemption, but Rome still rules.

Jesus may have worn the plaque for the cross around His neck as He went from Pilate’s tribunal to the place of execution. It provided the crime for which He was executed: “This is the King of the Jews.” Its mocking effigy not only ridiculed Jesus; it also taunted the Jews as they celebrated Passover, hoping for redemption. The Roman soldiers also mocked Jesus, “If You are the King of the Jews, save Yourself,” a refrain that appears throughout the Passion story on the lips of Pilate and his soldiers, which carries a very anti-Jewish attitude.

Even the chief priests, the ones who brought Him to Pilate and cried for Him to be crucified, mocked Him. They had won. They used Pilate to carry out their dirty work. They had effectively protected their wealth and power, both of which were given them for their collaboration with imperial Rome. And, as Jesus hung on the cross, subjected to the most cruel and painful torture ever designed by man, humiliated and mocked by those in power, He said, “Father, forgive them, for they do not know what they do.”

The one who commanded His followers to, “Love your enemies, do good to those who hate you” (Luke 6:27 NIV), did just that. He walked the path that He expects each of His followers to walk.

Then, when the moment of Jesus’ death came, He uttered the words of every faithful Jew upon their death bed, “Into Your hand I commit my spirit” (Psalm 31:5 NKJV). Like His Jewish contemporaries, Jesus’ citing part of the verse pointed to the larger context of the psalm, which is trusting God as the hope for redemption.

Everything about that awful day screamed that evil had triumphed. The ridicule, the humiliation. The pain, the cruelty. Darkness came upon the land. Hopes and dreams lay in tatters as Jesus hung on the cross. Yet, in the moment when He breathed His last, He uttered a profound confession in a faithful Father who had not abandoned Him.

Jesus went to the cross believing that His Father would not forsake Him but would raise Him from the dead. He never wavered. When the people mocked Him, He asked God to forgive them. With the final breath of life passing His lips, He affirmed His hope in a just and loving Father who would not abandon Him to the grave. He trusted that through His death and sacrifice on the cross, God’s redemption would be extended to all people.

When we find ourselves in the midst of chaos, with broken and shattered hopes, mocked and humiliated, do we give into despair? Jesus could have. In such moments, trusting God seems next to impossible. The fear, the hurt, the pain, the loss, and the sheer devastation of these moments can overwhelm us. Jesus found Himself in such a moment on the cross. He was not rescued from the pain, the torture, the humiliation, or death. Yet He trusted in His Father.

Jesus not only perfectly represented God’s nature through the entirety of His trial and execution; He also showed us how to go through these moments of pain, suffering, and oppression as a human being. He forgave those who did this to Him, and He never lost faith in His Father.

Father, even in our darkest hour, may we be like Your Son Jesus, who when reviled, He forgave,  and trusted in You. Amen.

Your ticket for the: Weekly Devotional: The Crucifixion