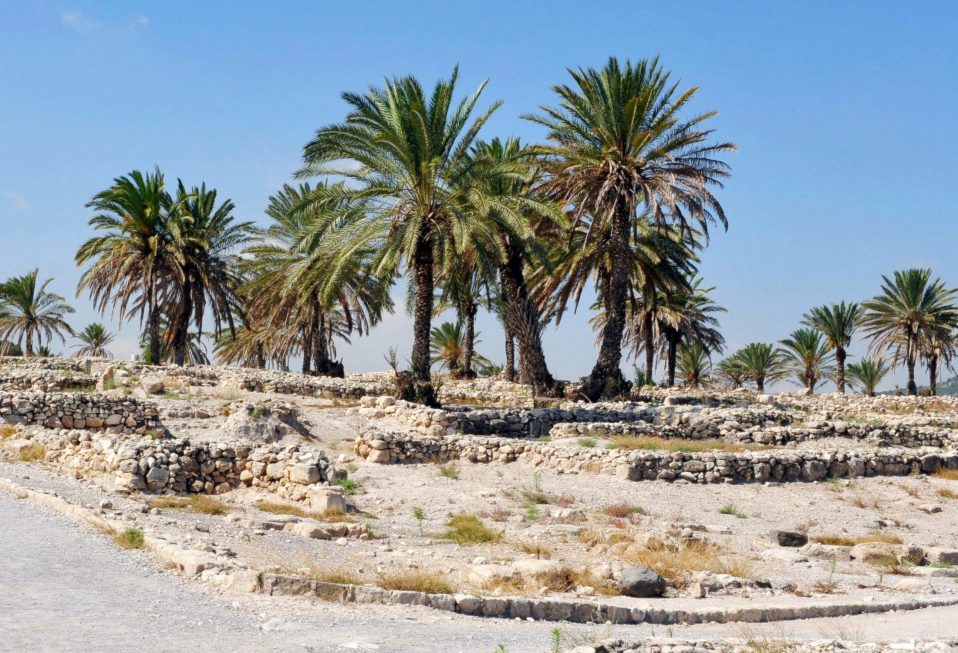 Situated in the western Jezreel Valley at the foot of the lowlands of Mount Carmel stands the ancient mound of Megiddo. It overlooks where Nahal Iron crosses through the Carmel lowlands, which provided passage for one of the branches of the most important highway in the Ancient Near East, a highway that connected Egypt via Israel’s coastline, through the Jezreel Valley, onto Damascus and Mesopotamia. Megiddo’s importance stemmed from its location guarding this most import roadway.

Archaeological excavations have revealed twenty layers of civilization beginning in the Neolithic period until the fourth century B.C. Its strategic significance made it the stage for battles through much of its history, with Pharoah Thutmoses III in 1468 B.C., Pharoah Merneptah in 1220 B.C., Pharoah Shishak in 924 B.C., and the battle in which Josiah, king of Judah, died at the hands of the forces of Pharoah Neco in 609 B.C. (2 Kings 23:29-30).

Megiddo’s strategic importance made it the object of Israelite conquest when the Israelites entered the land (Joshua 12:21). By the “waters of Megiddo,” the forces of Deborah and Barak defeated the Canaanite forces of the king of Hazor (Judges 5:19). Megiddo fell within the territorial allotment of Manasseh (Joshua 17:11), but the Manassites could not take possession of Megiddo. It remained under the control of the local Canaanites (Joshua 17:12; Judges 1:27).

During the United Monarchy, Solomon is said to have fortified Megiddo, along with Gezer and Hazor (1 Kings 9:15)—all three cities provided overwatch of the international coastal highway running from Egypt to Damascus and Mesopotamia. The final mention of Megiddo within the Bible is the death of King Josiah (2 Kings 23:29-30; 2 Chronicles 35:20-24). Within the destruction of the northern kingdom of Israel by the Assyrians in 722 B.C., Megiddo became an administrative city of the Assyrians, but its settlement steadily declined until it was abandoned in the fourth century B.C., most likely due to Alexander the Great’s conquest of the land.

Visitors to the site today can visit two multi-chambered gate complexes from the Bronze and Iron Ages. Two separate palace and administrative complexes have been excavated, as well as an area that contained several cultic places of worship from different time periods. The site contains the remains of horse stables, stone mangers, and an exercise corral for the horses. Kings of Israel stationed horse and chariot forces, which were the tank corps of the ancient world, at Megiddo due to its strategic location.

Perhaps the most impressive feature of the site that has been excavated is the water system. Ancient sites, especially administrative centers like Megiddo, had to provide the water needs for the city in times of peace and war. Most ancient sites sat on hills to offer the protection of elevation from an attacking army. Springs, however, usually do not sit on hills; they are found at their base. At Megiddo, the spring sits at the bottom of the west side of the mound. To bring the water into the city, the engineers cut a square shaft through the earth within the city’s fortified walls that connected to a long horizontal tunnel (80 meters long) that had been dug to the source of the spring. This tunnel brought the water to the area where the shaft had been dug, and the shaft enabled the people in the city to descend and draw water.

A final word should be made regarding the well-known idea that the ancient site of Megiddo had some connection with John’s mention of Armageddon in Revelation (16:13-14, 16). The usual explanation, Armageddon represents the Hebrew meaning the “mountain of Megiddo.” People will speak about the Valley of Armageddon, yet the Bible never mentions a Valley of Armageddon. This is a modern fiction, which appears for the first time in the nineteenth century.

No ancient Church father or Christian source ever connected Armageddon with Megiddo. Moreover, as we noted, Megiddo ceased to be inhabited in the fourth century B.C. The location of the site was forgotten. The first century Jewish historian Josephus did not know of it. In fact, he relocated the death of Josiah to a town he knew on the border between Egypt and the land of Israel. The fourth century Church father, Eusebius, did not know its location, nor did he connect Megiddo with Armageddon. No one, then, knew in the first century, when John wrote Revelation, where Megiddo was.

Finally, while Megiddo sits on a hill created by layers of civilization, it cannot be described as a mountain. Hebrew has a word for “hill,” a word that accounts for the names of places like Gibeah, Geva, and Gibeon. Megiddo is a hill, and not a mountain. Time does not permit a full explanation for what stands behind John’s Armageddon, but suffice to say, he expected the gathering point for the armies of wickedness to fight against God to be Jerusalem (Revelation 11:1-2; 14:20; and 20:9), the mountain of assembly.

Your ticket for the: Biblical Israel: Megiddo