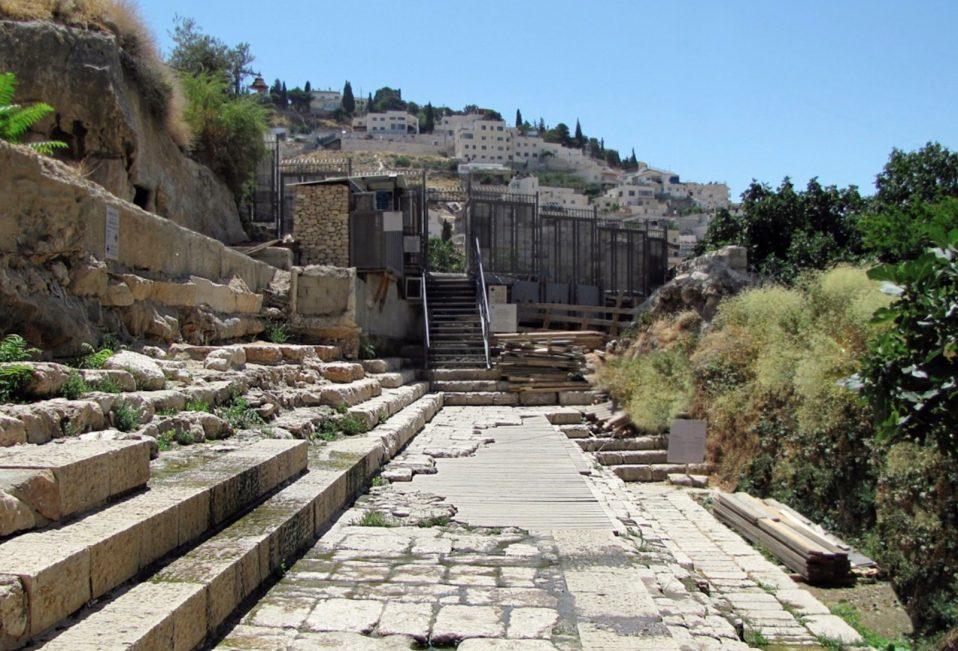 Archaeologists uncovered two flights of five narrow steps separated by a wide landing that descend into the pool. This enabled people to descend to different levels based upon the fluctuation of the water level due to either the rainy or dry seasons within the land of Israel. Although the archaeologists only uncovered one side of the steps of the pool, it seems that such an arrangement of steps surrounded the pool on four sides. The pool covered roughly an acre of land. Coins and pottery date the construction of the stepped pool to the mid first century B.C.

To the north of the pool, archaeologists uncovered a fine pavement of stones that resemble the first century street that runs to the west of the Western Wall of the Temple Mount. Discovery of column drums and column bases protruding from the pavement suggests that a colonnade ran along the pavement.

The Pool of Siloam appears twice within the New Testament (Luke 13:4; and John 9:7). In John, Jesus instructed the blind man to wash the mud from his eyes in the pool to be healed. It served the water needs of ancient Jerusalem (along with other pools in the city), and it also served as the largest ritual immersion pool within the city. Jewish pilgrims, who needed to be ritually pure before entering the sacred precincts of the Temple (see Acts 21:26), could use the Pool of Siloam for ritual immersion. Its size and proximity to the Temple makes it a suitable location for the baptism of the three thousand who responded to Peter’s sermon on the Day of Pentecost (Acts 2).

Archaeologists have suggested that the holes found on the steps leading into the pool might have supported screens made of wood or mats to provide privacy for those ritually immersing in the pool. Jewish ritual immersion, like what we find in the New Testament, required privacy as the person immersing did so in the nude, nothing can come between the bather and the water.

During the first century, on the last night of the festival of Sukkot (Tabernacles), water was drawn from the Pool of Siloam and brought to the altar of the Temple and poured out as a libation. The festival occurs at the end of the summer (around October), and the water libation requested rains from God (see John 7:37). This ceremony, known as the Beth HaShoeva, occurred at night. Jewish sources describe how pilgrims lined the route from the pool to the Temple carrying torches.

The first century Pool of Siloam likely covers the same pool mentioned in Nehemiah (3:15). Then, at a later time, the pool was enlarged and constructed in the manner of a Jewish ritual immersion bath.

Your ticket for the: Biblical Israel: Pool of Siloam