The Gaza Strip: What Could Have Been 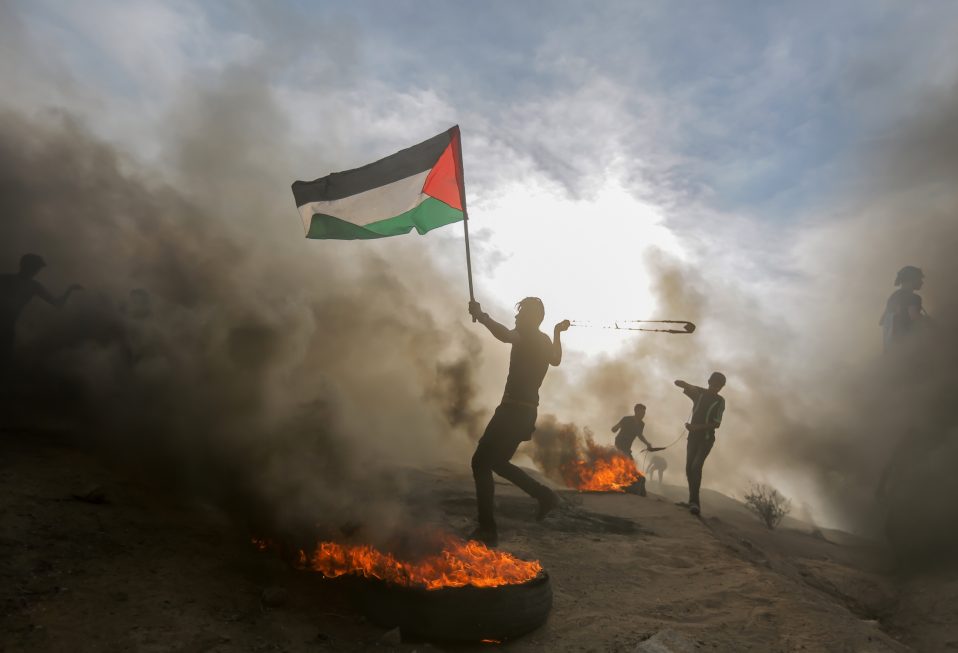 With 28,000 miles of stunning shoreline, the Mediterranean Sea annually beckons a third of the world’s international tourists to its gentle waves and pleasant climate. Twenty-two countries and over 3,000 islands show off a tapestry of assorted cultures, geographies, languages, foods, and histories. “Paradise” seems an appropriate description. Yet Gaza is not among these alluring destinations. Of the two million people in Gaza, more than 80 percent live below the poverty line, and unemployment is at 70 percent for the younger generation. What happened?

Like everything “Middle East,” the histories are complex, and context is important. I’m remembering August 15, 2005, when I watched Israel’s Unilateral Disengagement on television and followed the unfolding, unimaginable story. What I saw was grief, anger, suffering, and heartbreak. That day, Israel’s now-deceased Prime Minister Ariel Sharon, with agreement from parliament (Knesset), launched the nation’s Unilateral Disengagement to remove some 9,000 Jewish citizens from their homes, businesses and synagogues in Gaza. Even for the Israel Defense Forces (IDF) overseeing the eviction, it was a wrenching, anguish-filled situation. Sharon’s decision to remove Jewish citizens from their homes, schools, synagogues, and communities in Gaza was done in order to appease the Palestinian Authority and the world in an effort to bring peace. That was the dream anyway.

Yet, prior to 2005, several years of intense and difficult discussions took place between Israel, the Palestinian Authority, and leaders of the global community. The primary question remained, “Will Israel be safer?” Gaza’s population was over a million people and growing, with around 99 percent Palestinian and 0.06 percent Jewish. How could Israel administrate this demographic? Could the IDF offer protections to the small Jewish population? Would friction lessen between Israelis and Palestinians if Jewish citizens left Gaza? The decision created an enormous amount of discord and dispute. Many said it would not bring peace. But Israeli leaders hoped to reawaken a stagnated peace with Palestinians along with an improved international status.

Try to imagine leaving behind your homes, schools, synagogues, and businesses. Even the graves of 45 loved ones had to be moved, knowing that Palestinians would desecrate them otherwise. The dead included three IDF soldiers who likely died defending Israeli civilians against already active Palestinian violence. Digging up a grave, moving it to another location in Israel, and living through a second funeral. Their loved ones could not even rest in peace.

The Gaza Disengagement took a few days. Fortunately, physical injuries were light with no lives lost in the process. However, the emotional pain of being forced to leave your home of 38 years was a crushing experience for many. The Jewish residents did their best with overall restraint, as did the IDF. Never had an army relocated so many fellow citizens against their will and with such an extraordinary display of courage, discipline, and compassion.

Author Michael Oren, Israel’s former ambassador to the United States, described one scene this way: “The severest test of the battalion’s fortitude—and humaneness—occurred in Badolah’s synagogue, where the settlers were afforded an hour of parting prayer. But after two hours of waiting in the blistering sun, the soldiers decided to enter. The scene that greeted them was shocking: settlers clutching the pews, the Ark and the Torah scrolls, or writhing on the floor. The troops tried to comfort them, only to break down themselves, and soon soldiers and settlers were embracing in mutual sorrow and consolation.”

The 1967 Six-Day war is a backdrop to 2005. Israelis gained control of Gaza from Egypt after Syria, Egypt, and Jordan attacked Israel to “destroy them.” After winning the Six-Day War, Israelis set about founding 25 towns, reviving the land with crops, flowers, and businesses, and providing employment for Palestinians. For 38 successful years, Israelis planted deep roots, raised families, and celebrated their biblical festivals. That is, until Israel’s 2005 Unilateral Disengagement.

Exiting Gaza’s Kusufim Crossing into Israel on September 12, 2005, Brigadier General Aviv Kochavi, head of the Gaza mission, declared, “The responsibility for whatever takes place inside falls upon the Palestinian Authority.” But the minute the IDF closed the last gate to Gaza, Palestinians set about to destroy the hopes for their own future. Some even went on a rampage in the land given to them with no Jew left behind. They destroyed everything in sight, even tearing down greenhouses donated for them to keep and prosper. It was as if such behavior was intended to communicate that they would not be satisfied until Israel was no more. The United Nations, governments, and international organizations had met many months before the Disengagement. Nations and banks allocated money to give Gaza a good start. All to no avail.

A simmering power struggle between the Hamas Islamist terrorists and the Fatah political party of the corrupt Palestinian Liberation Organization (PLO) finally erupted in the Battle of Gaza (June 10-15, 2007). Fatah had lost parliamentary elections in 2006 after an attempted unity government. The Palestinians were then split into two de facto entities: the West Bank, governed by the Palestinian Authority, and Gaza, governed by Hamas.

Since Israel launched Operation Cast Lead in 2008 to defend civilians in southern Israel, Iran has supplied Hamas’s weapons arsenal. The Imams are proud of this fact. By Israel’s 2012 Operation Pillar of Defense, Iran and Hamas were openly bragging about Iran’s help. Ali Larijani, speaker of the parliament of Iran, said the following to that ruling body on November 21, 2012: “I am proud to announce that our support for the Palestinians was in money and arms. We are proud to announce that we will continue standing by the Palestinians in the most difficult of situations.”

Stop and consider. What would you do after 14 years with thousands of rockets aimed at your family, the Red Alert sounding at all hours, and your children crying and running for shelter? You long only for peace, not war. These are only a few kinds of terror that Israeli civilians have endured along with three wars between 2008 and 2014. All wars were instigated by terrorists. Would you shout, “Enough is enough?”

Iran has kept its deadly promises. The Islamist way of war is the exact opposite of the IDF and international protocols. Iran and its terror proxies remain dedicated to civilian violence not only against Israelis but, in a double war crime, using its own civilians as human shields. Realizing that Israel strives to avoid civilian casualties, these terrorists hide in mosques and hospitals, locate their offices and weapons in high rises, wear no uniforms, and use ambulances and press vehicles to ensure safe passage. And now they have an extensive web of tunnels—dubbed the “Metro”—in civilian areas of Gaza. Conversely, the IDF—in order to prevent noncombatant deaths—warns Palestinian civilians via calls, leaflets, or roof-knockings by dropping non-explosive devices on targeted buildings that house weapons or terrorists.

Understanding some international law and norms is necessary, because who starts a war matters. The United Nations Charter in Article 51 affirms “the inherent right of individual or collective self-defense if an armed attack occurs against a Member of the United Nations” by anyone. Gaza’s terrorists have launched all attacks on Israeli civilians.

Professor Beres also noted a remark from Sheikh Omar Bakri Muhammad, a prominent militant Muslim cleric in London, “We don’t make a distinction between civilians and non-civilians, innocents and non-innocents. Only between Muslims and unbelievers. And the life of an unbeliever has no value. It has no sanctity.”

The Muslim cleric’s remark should erase any doubt about Israel’s right to defend its civilians. His remark also helps answer my “what happened” question in the beginning of my article. The 2005 Disengagement gave Palestinian leaders a golden opportunity. Unfortunately, their hatred for Jews and each other has brought on their destruction. If Gaza really wanted to provide prosperity and well-being for its two million people, they would have chosen to build their own “Singapore by the Sea” with the billions of dollars donated. They would now operate a thriving port to build their economy on the Mediterranean Sea, traversed by 220,000 merchant vessels—a third of the world’s total merchant shipping.

Instead of instigating terror and digging tunnels, all they had to do was build up a beautiful land with its 25 miles of oceanfront property. They could have enjoyed employment at glamorous hotels, fine restaurants, and successful small businesses. Tourists flooding in to enjoy it all. Massive orchards of oranges and fields of flowers to ship to Europe. There would have been no need for Israel to inflict airstrikes or blockades.

Writing these words brings me sadness for the Palestinian people in Gaza, a sadness of what could have been possible for the men, women, and children who live in an open-air prison built not by Israelis, but by hate. And sadness that Israelis have so long lived under relentless terror with no end in sight.

Many times, I’ve visited the kibbutzim located next to the Gaza fence. Their communities are lovely with flowers, playgrounds, and crops. They celebrate Shabbat, weddings, and all the Jewish festivals. Even though they have lived with ongoing traumatic stress for years, I am inspired by them. They have shown us how to live life, not as victims but as those who bravely hold on to hope as best they can.

Please join CBN Israel in prayer this week as we witness this terrible conflict between Israel and Gaza:

We invite you to intensify your prayers for Israel relying on Psalm 144:1-2:

“Praise be to the LORD my Rock, who trains my hands for war, my fingers for battle. He is my loving God and my fortress, my stronghold and my deliverer, my shield, in whom I take refuge, who subdues peoples under me.”

Your ticket for the: The Gaza Strip: What Could Have Been

The Gaza Strip: What Could Have Been