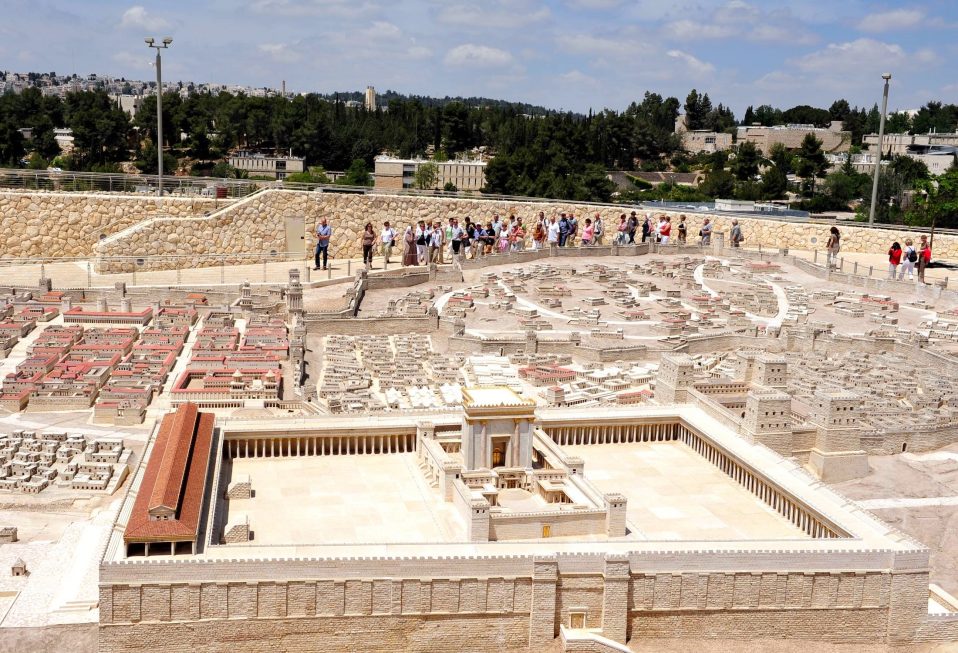 The large, scale model of Jerusalem in A.D. 66 offers one of the main attractions at the Israel Museum in Jerusalem. Hans Kroch, who owner of the Holy Land Hotel in Jerusalem, commissioned Professor Michael Avi-Yonah and his students to create the model in honor of Kroch’s son who died in the War of Independence in 1948. Avi-Yonah provided topographical and archaeological detail and architectural design.

For many years, the model resided at the Holy Land Hotel. Today the model is housed at the Israel Museum. When Avi-Yonah and his students began the project, the Old City of Jerusalem as well as the City of David—the area of biblical Jerusalem—lay in East Jerusalem, which was controlled by the Hashemite Kingdom of Jordan.

This raises the obvious question: how could he have built such an accurate model of Jerusalem in A.D. 66 without the assistance of archaeological discovery? The answer lies in the rich descriptions of Jerusalem provided by the first century Jewish historian Josephus. Josephus wrote his works for a non-Jewish, Roman audience that had never been to Jerusalem. He provided such a detailed description of the city that using what they knew about the Roman world and the land of Israel in the first century, Professor Avi-Yonah and his students were able to produce this model, which contains a great deal of accuracy. While there are some mistakes within the model, it offers a testament to Josephus and his value as our greatest source on ancient Judaism and the land of Israel in the first century.

Visitors to the model will notice three primary features. First, Jerusalem in the first century covered much more area than the modern Old City of Jerusalem (which has nothing to do with biblical Jerusalem).

Also, the city had two principal foci. On its western edge, at the highest point of the city, stood the palace of Herod the Great. The largest of Herod’s palaces, his palace in Jerusalem played host to the wisemen (Matthew 2) and Jesus when he stood before Pilate. On the northern end of palace stood three towers, which Herod named Mariamme, Phasael, and Hippicus. On the eastern side of the city stood the Temple and the enclosure that surrounded it, which made the Temple Mount the largest sacred enclosure within the Roman world in the first century. The Temple provided the economic and religious center of the city.

Jerusalem in the first century produced nothing; it did not sit on a major trade route. It dealt in religion. Jewish and non-Jewish pilgrims (see Acts 2) streamed into the city from all over the known world three times a year: Passover, Pentecost, and Sukkot. Pilgrims approached the Temple from the south. On top of the Temple Mount today stands the golden Dome of the Rock. To gain perspective, Herod’s Temple, the Temple that Jesus, Peter, and Paul knew, was twice the height of the Dome of the Rock. Looking at the model, visitors gain some perspective of its awesome grandeur.

The third feature of the city is its walls. In the model, people see three different wall lines. The wall that comes from the south-eastern part of the Temple Mount surrounding the southern and western sides of the city, which turns east and connects at the western wall of the Temple Mount, Josephus calls the first wall. A large wall includes the northern neighborhoods; this is Josephus’ third wall, which was built after the time of Jesus. Inside the third wall, visitors to the model see a second wall. The first and second walls contained the Jerusalem that Jesus knew, which was twice the size of the modern Old City.

One of the biggest challenges for guides of Jerusalem is helping their groups understand the city’s history and many layers. The model of Jerusalem at the Israel Museum offers an excellent visual, as well as a monument to the city at its height in the first century.

Your ticket for the: Biblical Israel: Second Temple Model