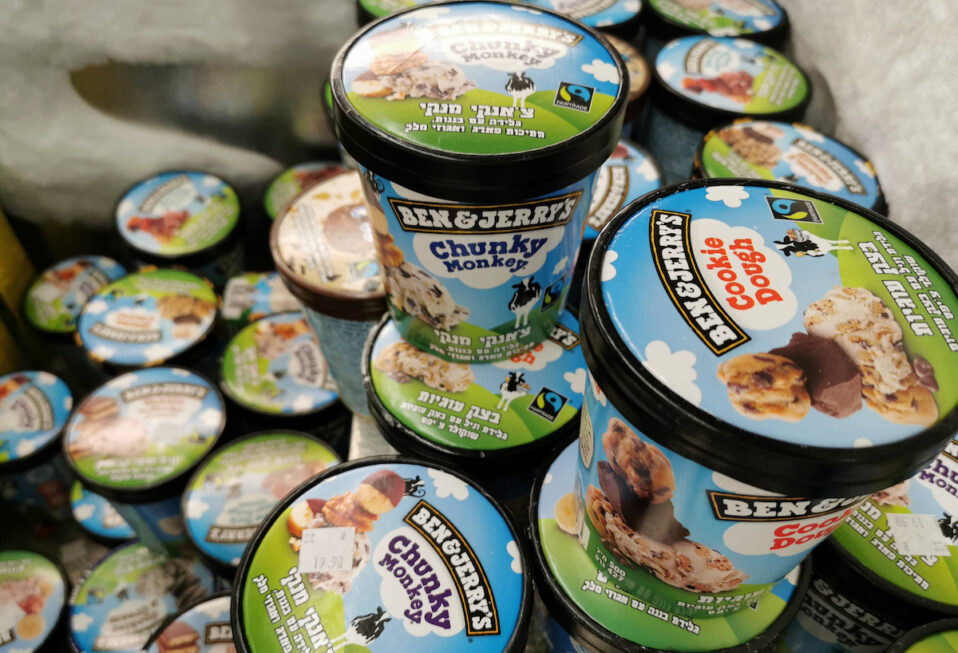 The Vermont-based ice cream company, Ben & Jerry’s, has suffered a brain freeze—but not from eating too much ice cream at one time. No, their brain freeze is due to backing the Boycott, Divestment and Sanctions movement (BDS). This campaign is anti-Semitism in another guise, economic warfare against the world’s only Jewish state. Israel’s new president, Isaac Herzog, noted, “The boycott against Israel is a new kind of terror.” President Herzog is correct. Anti-Semitism is the parent of BDS.

BDS especially targets Judea and Samaria, Israel’s biblical heartland, calling them “occupied” and belonging to Palestinians. The bottom-line motive behind the BDS movement is not peace or even a Palestinian state. It is built upon hatred and destruction. Its goal is to take over Israel and eliminate the Jewish state altogether. Their slogan is clear: “From the river to the sea, Palestine will be free!” It is important to emphasize that the BDS movement ignores scriptural truths about the land of Israel.

BDS is a spear of anti-Semitism aimed into the heart of Israel. Its goal is to render Israel and its supporters disabled or, worse yet, non-existent. BDS proponents utilize intimidation to target corporations, unions, and stores that sell Israeli products. They even intimidate celebrities into canceling their concerts in Israel.

Nothing is exempt—not even the distribution of ice cream. The Ben & Jerry’s decision shifts this popular sweet delight into an unpalatable mix of BDS economic warfare against Israel. On July 19 they announced that they “will not renew the license agreement when it expires at the end of next year.” This means that they will no longer be distributing the ice cream in Judea, Samaria, and East Jerusalem. The decision would end a license agreement with an Israeli franchisee who has made and distributed Ben & Jerry’s in Israel since 1987.

The company said in a statement on its website, “We believe it is inconsistent with our values for Ben & Jerry’s ice cream to be sold in the Occupied Palestinian Territory (OPT).” They are referring to Israel’s so-called West Bank, which is the biblical heartland full of ancient Jewish history, including the patriarchs. Is it possible that Ben and Jerry forgot their Bible history? Some 30 centuries ago, the ancient tabernacle in Shiloh was in the heart of Samaria for 369 years.

It is an unfortunate wrong turn for the two Jewish pals from Brooklyn who launched their business in 1978. Known not only for their delightful marketing and successful business, this duo holds superb philanthropic values that have helped their own employees in economic downturns as well as many needy people through their foundation.

However, when it comes to Israel, their uninformed philanthropy is just plain wrong. In their attempt to support the Palestinian cause, they ignore proven ancient history and penalize their 140 employees, some of whom are Palestinians. These individuals will be unemployed, and Israel once again slandered.

Ben and Jerry have joined up with a growing segment in the American Jewish community who mistakenly view Israel as an apartheid state, along with increasing numbers of mainline Christian denominations like the United Church of Christ (UCC). On July 18, the UCC voted 83% in favor of this statement: “We reject Israel’s apartheid system of laws and legal procedures.” This slander toward Israel is egregious and is a gigantic misrepresentation of the facts on the ground.

The outright lies, slander, and opposition to the world’s only Jewish state denounce God’s biblical covenants designating the Jews’ right to their 3,000-year-old biblical homeland in Judea, Samaria, and Jerusalem. When Ben & Jerry’s call Judea and Samaria OPT—the acronym for Occupied Palestinian Territories—it is in fact POT, Palestinian Occupied Territories. Palestinians are occupying ancient Jewish land. Nevertheless, few acknowledge that if Palestinian hatred, hostility, and terror against Israel stopped, there would finally be a real opportunity for Israelis and Palestinians to live side-by-side in peace and freedom.

The firestorm of opposition to Ben & Jerry’s will hopefully thaw and melt their recent decision, since it is swiftly backfiring on numerous fronts. Unilever, the British corporation that bought Ben & Jerry’s in 2000, sells the ice cream in 35 countries. The corporation is now experiencing a sharp decline in the stock market. Moreover, the Hebron Fund, a New York based not-for-profit charitable organization, just launched a petition against Ben & Jerry’s that at this writing has more than 20,000 signatures.

Shurat HaDin Law Center, an Israeli firm in Tel Aviv, specializes in going after monetary compensation for individuals, families, and companies that have suffered due to anti-Semitism and terrorism. The firm is already organizing legal actions on behalf of one of the Ben & Jerry’s factories located in Israel; it is only one of three outside the United States. The NGO has already applied for trademark rights for “Judea & Samaria’s Ben & Jerry’s.” The law center is also thinking up fun names for new flavors. One of them is “Frozen Chosen People,” with a headshot of Theodore Herzl, the father of Zionism, on the pint box.

The Jerusalem Post reported that Shurat HaDin founder and president, Nitsana Darshan-Leitner, wants to force Unilever to defend its trademark in court and explain why they did business in such locations as Crimea and South Sudan. I agree with Darshan-Leitner, who said, “I don’t think they thought this out very carefully.” When companies like Ben & Jerry’s follow the lead of movements like BDS, they taking part in a movement that is less interested in justice and more interested in singling out the world’s only Jewish state.

In the meantime, Avi Zinger—CEO of the Israeli Ben & Jerry’s plant—announced, “We refuse to stop.” Israelis responded with buying more ice cream, which increased sales by 21%, to show their support for Zinger’s decision.

The Israel American Council (IAC) denounced the decision, commenting that “Ben & Jerry’s decision to stop selling its ice cream to certain Israeli populations is a disgraceful surrender to the BDS hate movement, which promotes a culture of fear and violence and seeks to eliminate the Jewish homeland—the only democracy in the Middle East.” On July 23, the IAC took the step of flying a banner over the company’s Vermont headquarters emblazoned with the plea, “Serve Ice Cream, Not Hate.”

In another tasteless example of anti-Semitism, Vermonters for Justice in Palestine (VTJP) are delighted with the Vermont-based company. They and other pro-Palestinian groups have pushed Ben & Jerry’s for years. In their press release FTJP stated, “We join our fellow activists in the global BDS movement in welcoming Ben & Jerry’s decision to end sales of its ‘peace & love’ ice cream in Israel’s unlawful settlements and to not renew the licensing agreement with the Israeli franchise.” VTJP also thanked “thousands” of BDS activists both in the U.S. and internationally, including the Palestinian BDS National Committee, the U.S. Campaign for Palestinian Rights, Movement for Black Lives, and Jewish Voice for Peace.

A New York Times article in 2010 quoted Jerry Greenfield: “We didn’t go to business school, but we wanted to do ice cream. So, we tried to give people what we wanted—a sense of fun.” The Ben & Jerry’s Israel plant is in Kiryat Malachi near Ashkelon and within rocket range of Palestinian terrorists in northern Gaza. Facing possible unemployment and rockets from Palestinians in Gaza is certainly not what anyone would consider “fun.”

BDS is a misplaced, targeted hatred for the Jewish nation and people. With anti-Semitism on the rise, we must recognize that God has given Christians another mandate, a second chance to overcome apathy and counteract hatred against Jewish people worldwide.

The Holocaust remains engraved in Jewish hearts that bear the scars of grief and loss. Under Nazi rule, although Yad Vashem recognizes almost 27,000 Righteous Among the Nations as “Drops of Love in an Ocean of Poison,” Christian rescuers were far too few. Today, we must change that, recognizing Judaism as the birthplace of our Christian faith and motivated not just because we want to “be blessed,” as Genesis 12:3 says, but because it’s a tangible way to express our love and gratitude to God’s chosen people.

We have tools to stop BDS. We can transform BDS—Boycott, Divestment and Sanctions—into Bless, Discover, and Support. Bless Israel with our daily prayers. Discover Israel by traveling there when possible. Support Israel through many wonderful Christian and Jewish organizations while also sharing the true story about Israel on social media and in our spheres of influence.

In thankfulness to our Jewish Lord, employ these tools to honor Him for redeeming us and giving us a faith legacy through the Old and New Testaments imparted by God through Jewish teachers and scribes.

Please join CBN Israel in prayer this week as we stand in solidarity with the Jewish nation and people:

Now more than ever, it is absolutely essential for Christians to stand strong with Israel and the Jewish people as they face a host of enemies: “But my enemies are vigorous, and they are strong; and those who hate me wrongfully have multiplied” (Psalm 38:19).

Your ticket for the: The Ice Cream Wars: Will Anti-Israel Hostility Melt?