Palestinian Authority President Mahmoud Abbas: The Man Behind the Mask 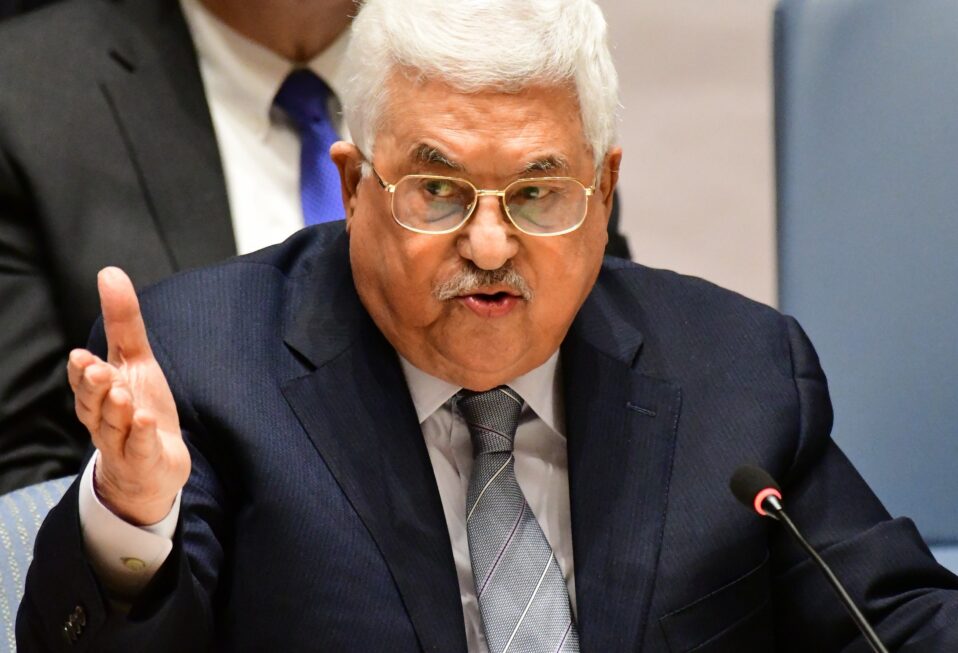 Decades before the COVID-19 pandemic swept across the world, prompting the widespread use of face masks, Palestinian Authority (PA) President Mahmoud Abbas had twisted together his own version of a mask—one that hid his lifelong motives and remade him into a credible world leader. Abbas controls the PA’s Fatah Movement and political party under the umbrella of the Palestinian Liberation Organization (PLO). The PLO was led by Yasser Arafat until his death in 2004 when Abbas, an Arafat devotee, took over.

In his earlier days as a key terror accomplice, Mahmoud Abbas went by another name. His followers called him Abu Mazen, a pseudonym. Whether he goes by Abu Mazen or Mahmoud Abbas, his mask somewhat obscures his past, promotes terror against Israelis, and shapes a presidency that harms the Palestinian population.

Hostilities against the only Jewish state and the Jewish community worldwide often focus on the “plight” of the Palestinian people. Israel is slandered, berated, and accused of being an apartheid state—a system of segregation or discrimination based on grounds of race. Yet for years, the truth of Israel’s being a parliamentary democracy and having a diverse population has been lost in a wave of supersensitive emotion emanating from Abbas. In reality, the Palestinians live under the 85-year-old’s dictatorship, which is far grimmer than anything the Israelis could devise.

Abbas, who was elected in 2005 for a four-year term, has since 2009 conveniently delayed new elections. He runs a kleptocracy with multi-billions in international aid donations aimed at helping his Palestinian population. Although some of the money is actually assigned to building civic institutions and aiding other efforts to relieve the growing frustrations of Palestinians on the street, the Abbas-style money management results in benefiting himself and Palestinian terrorists who are considered heroic martyrs.

In fact, one of his most outrageous policies is to reward the families of dead terrorists or terrorists imprisoned in Israeli jails. In 2017, during the Trump administration, Congress passed the Taylor Force Act with robust bipartisan support. The Act halted most U.S. funding to the Palestinian Authority—except for water, childhood vaccinations, and East Jerusalem hospital funds—until the PA stopped paying stipends into its “Martyrs’ Fund.” Until it passed, American taxpayers had essentially been funding Palestinian terror. Israel’s i24 news reported that in 2017, for example, that the total budget for “prisoners’ payments” stood at an astonishing $345 million—half of the international contributions to the PA’s budget.

The Taylor Force Act grew out of its namesake’s death. The young man, an outstanding West Point graduate and U.S. Army veteran, was murdered while on a study trip to Israel with Vanderbilt University. On March 9, 2016, Fox News reported that Force was walking on a boardwalk in Jaffa, when a 22-year-old Palestinian terrorist stabbed him to death. It was part of a hideous spree; the terrorist knifed 10 others in three locations during a 20-minute attack. In July 2018, Israel’s Knesset passed its own measures against pay-to-slay. The Biden Administration’s commitment to the Taylor Force Act is somewhat questionable. In May, when Secretary of State Antony Blinken met with Abbas in Ramallah, he announced an overall package of more than $360 million for the Palestinian people.

A glaring example of Abbas’s excesses is the building of his $13-million palace that broke ground in 2015. The oversized palace located near Ramallah—the seat of his government in Samaria, which is part of Israel’s biblical heartland—boasts two helipads. His administration is riddled with corruption; foreign aid footed the bill for the palace and many other luxuries that Abbas believes he’s entitled to.

By his actions, Abbas shows that he doesn’t put his people first. The PA vaccination program has been poorly run. Our World in Data indicates in its July report that only 3.6% of Palestinians had received at least one dose, and less than 1% were fully vaccinated. Israel vaccinated Palestinian workers, and Israeli Arabs got vaccinated months ahead of other Arabs in the Middle East. In addition to rejecting lifesaving vaccines, last year the PA twice refused cargos of medical supplies from the United Arab Emirates (UAE) simply because it was coordinated with Israel rather than with them.

Abbas presses on with his deceitful mask. In a July 11 call with Israel’s new president, Isaac Herzog, a press statement in the Palestinian official WAFA news agency reported that Abbas “stressed the need to bring about a comprehensive truce in Gaza, the West Bank and Jerusalem.” However, Abbas has refused direct negotiations with Israeli leaders since 2009, declaring, “I will never allow a single Israeli to live among us on Palestinian land.” Clearly, while anti-Israel hostility brokers are churning out lies, the United Nations, European Union, and growing numbers of anti-Semitic-leaning politicians, anti-Israel Jews, and Christian individuals and institutions are tone-deaf to the facts: the Palestinian Authority is not interested in peace with the Jewish nation.

Palestinians’ well-documented and well-founded unrest toward Abbas and his corrupt policies is growing. On June 24 Nazar Banat, a brave Palestinian activist and harsh critic of the PA, died at the hands of PA security forces after being arrested. Thousands of Palestinians took to the streets in the so-called West Bank demanding Abbas and his cronies to resign.

Khaled Abu Toameh, an Arab Muslim, is an award-winning journalist who has covered Palestinian affairs for nearly 30 years. He is an exceedingly reliable source of journalistic truth. I, along with Christian leaders I have recruited for numerous trips to Israel, have heard Toameh’s excellent briefings in person. I frequently read his articles written for Gatestone Institute and many other media sources. Here’s one of his frequent quotes about the PA: “For many years the foreign media did not pay enough attention to stories about corruption in the Palestinian areas or about abuse of human rights or indeed to what was really happening under the Palestinian Authority. They ignored the growing frustration on the Palestinian street because of mismanagement and abuse by the PLO of its monopoly on power.”

Khaled Abu Toameh is correct. However, not only have the media not paid attention—they have distorted and disseminated their version of news reported with little to no context. And doubtless you have not read from your news sources most of what I describe here about Abbas, his dictatorial leadership, and his policies.

The octogenarian who wears a fine western suit, wrote his Holocaust denial PhD in the former Soviet Union, and looks so harmless nevertheless had Yasser Arafat as his mentor. Abbas stood by Yasser Arafat’s side for more than 40 years. A propaganda mastermind, Arafat was born in Cairo, Egypt, in 1929. He sat at the feet of his great uncle Amin al Husseini, the Grand Mufti of Jerusalem, and learned his hateful tradecraft well. The Grand Mufti was a Nazi collaborator committed to Hitler’s “Final Solution.” Arafat went on to form the Palestinian Liberation Organization.

The Oslo Accords signed in 1993 between Arafat and former Prime Minister Yitzak Rabin allegedly established a way to peace. Arafat, in a clever coup, was then awarded the Nobel Peace Prize in 1994 along with Rabin. Previously, Arafat had been kicked out of Jordan and Lebanon, then Israel allowed Arafat to move to Ramallah after the 1993 Oslo Accords. Arafat got busy creating the nomenclature of “Palestinians” in Israel to promote their victimhood and the “rights” to Israel’s ancient land.

The peace Israel desperately longed for was not to be. Israeli leadership did not grasp the fact that although Arafat spoke Arabic, Arafat’s native language was deceitfulness and lies. The “peace” eventually erupted into the Second Intifada, which lasted from 2000 to 2005 and snuffed out the lives of more than a thousand Israeli men, women, and children—in restaurants, buses, and along highways.

Arafat was Abbas’s tutor in terror. Although not on location in Munich, Abbas was nevertheless an accomplice to help fund the Palestinian’s Black September Olympic murders of Israeli athletes in 1972 along with other terror operations.

Since Abbas took over after Arafat’s death in 2004, he has spoken at the UN General Assembly almost every year to a mostly enthusiastic audience that is primed to hear about Israel’s “mistreatment” of the Palestinians. Unlike his mentor Arafat, he doesn’t carry a gun into the UN. But in 1974, when Yasser Arafat addressed the UN General Assembly he said, “I’m holding an olive branch for peace in one hand and a freedom fighter’s pistol in the other.” Incidentally, he walked into the UN General Assembly with his pistol at his side and was forced to set it aside before mounting the podium.

Abbas himself makes all manner of statements at the UN and with the undercurrent of cloaked lies and deception. He recently declared that Palestinians “spread a culture of peace … fight violence and terror,” and “are not against Jews.” He added that the PA will “never turn to violence and terror.” In another speech, he vehemently declared, “Even if I’m left with one penny, I’ll pay it to the families of the martyrs, to the prisoners, and to the wounded, and I won’t withhold this from them.”

Palestinian Media Watch (PMW), another excellent source of truth about Palestinian leadership, revealed videos of Abbas’s Fatah Movement when they entered the year 2020. They celebrated their Fatah anniversary in West Bank towns. The annual celebration marks January 1, 1965, when Fatah carried out its first terror attack against Israel, attempting to blow up Israel’s National Water Carrier—a vital system of canals and pipes that delivers water to most of the nation. They glorified terror and violence in their rallies with fake suicide belts, assault rifles, and knives. Since 1996, PMW (palwatch.org) has utilized a skilled team of Arabic language researchers who closely monitor, translate, and analyze PA-controlled media. It is important to note that Abbas and other corrupt leaders say one thing in Arabic and another in English for gullible foreign audiences.

Hopefully, someday the Palestinians will finally have the freedom to vote against an Abu Mazen/Mahmoud Abbas and for a real leader—one who refuses thuggery and helps shape a democracy.

Please join CBN Israel in prayer for both Israelis and Palestinians:

Jeremiah 22:17 notes, “But your eyes and your heart are intent only upon your own dishonest gain, and on shedding innocent blood and on practicing oppression and extortion.” In our prayers this week, let’s focus on this verse to pray for Palestinian leadership.

Your ticket for the: Palestinian Authority President Mahmoud Abbas: The Man Behind the Mask

Palestinian Authority President Mahmoud Abbas: The Man Behind the Mask