Economic Zionism: A Powerful and Peaceful Way to Oppose Economic Warfare Against Israel 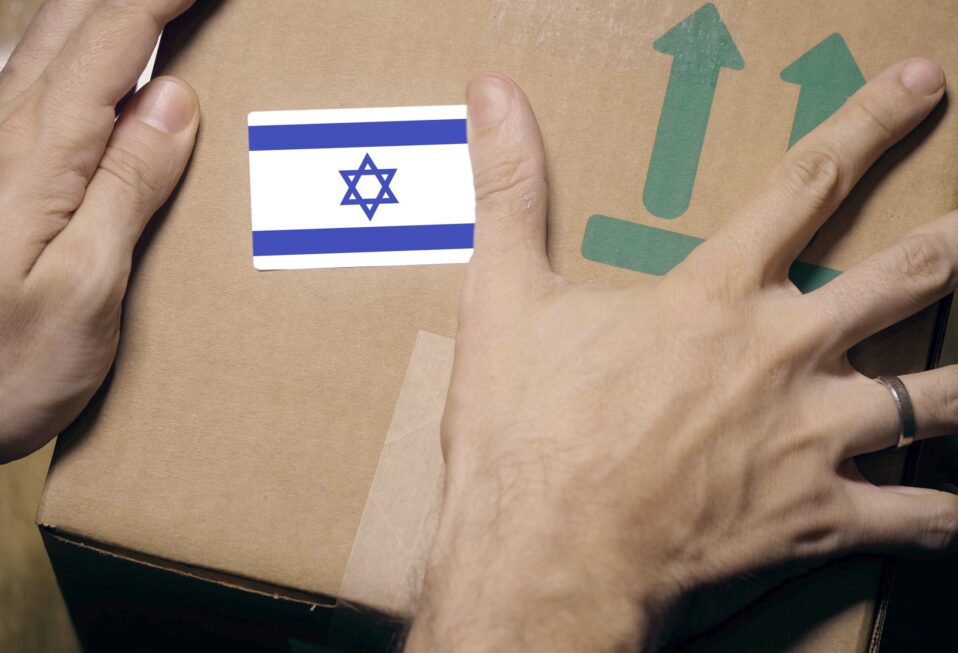 Israel’s biblical heartland is Judea and Samaria. This region is widely known as the “West Bank,” as it lies west of the Jordan River. Much of the world considers Israel as “occupying” this area—but they are wrong.

God deeded Judea and Samaria to modern Israel’s ancient ancestors. Genesis 15:18 records it in the courthouse of heaven in the world’s most reliable book: the Bible. “On the same day the LORD made a covenant with Abram, saying: ‘To your descendants I have given this land, from the river of Egypt to the great river, the River Euphrates.’” God’s real estate deed is irrevocable, and the modern residents of the biblical heartland are rightly placed.

Scornfully called “settlers” by the Palestinians and many other groups today, the Jews began “settling” in their biblical heartland in 1,400 B.C., when they crossed the Jordan River under Joshua’s leadership. Joshua 1:1-9 records it as happening more than 3,000 years ago. There are now around 450,000 Jews are at home in Judea and Samaria.

Israeli citizens in the heartland are re-pioneering their ancient homeland referred to in Isaiah 61:4: “And they shall rebuild the old ruins, they shall raise up the former desolations, and they shall repair the ruined cities, the desolations of many generations.” The term Zionism, coined in 1890, grew out of this verse. It is simply defined as the national movement for the return of the Jewish people to their homeland and the resumption of Jewish sovereignty.

And in addition to the political Zionism that founder Theodor Herzl championed, there is another movement—Economic Zionism—that not only helps support businesses for Israeli livelihoods but also offers a tangible way for Christians and Jews to oppose the Boycott, Divestment and Sanctions (BDS) movement.

Briefly, BDS is economic warfare against the world’s only Jewish state. BDS proponents strive to halt the purchase of Israeli products, push back against companies that help Israel, and urge countries to sanction Israel. The movement was launched in 1995 by imprisoned terrorist Omar Barghouti, who has made the BDS goals clear: “Definitely, most definitely, we oppose a Jewish state in any part of Palestine. … Palestinians have a right to resistance by any means including armed resistance. Jews aren’t indigenous just because you say you are.”

Countering BDS economic warfare by supporting local enterprise, Economic Zionism in Judea and Samaria offers amazing options to thwart BDS. What follows is a sampling of Israeli businesses (and a charity) that include olive oils, tea, soaps, jewelry, pottery, wine, organic cosmetics, and Judaica. Exploring the following sites, you can enjoy products from the land of milk and honey to bless yourself, your family, and your friends. And, by developing into an economic activist, you will be standing against the animosity toward Israelis living in their biblical heartland.

First Fruits (Bikurim in Hebrew), found at bikurim-israel.org, is a global project that is defining a new generation of Zionism: Economic Zionism. They describe themselves as the “first and only non-profit initiative allowing philanthropic investment directly to the building and strengthening of the heartland.” The Hebron Hills, Judea, Jordan Valley, Binyamin, Samaria, and Gush Etzion where Bikurim’s warehouses are located is full of Jewish holy sites. Bikurim is a person-to-person operation complying with God’s covenants with Abraham 4,000 years ago. In fact, pilgrim farmers brought their first fruits—Bikurim—to the Temple as described in Deuteronomy 26:3-10.

Here is a poignant example of what occurred when a Philadelphian named Steven decided to contribute to Bikurim. Steven had learned about the horrific death of Ester Horgan, an artist murdered by a Palestinian terrorist in 2020. When he wanted to do something meaningful in her memory, Bikurim connected him with an artist in Tal Menashe where Ester had lived. Steven donated in Ester’s honor, remarking, “To just sit back as my people are being attacked, killed, and feeling helpless, was something I couldn’t live with. Bikurim offered me a practical and meaningful way to put my thumb on the scale and support the building of Judea and Samaria.” The blessing went both ways. Bikurim connected Steven with an artist who was Ester’s close friend. The friend, in tandem with Ester’s husband, sent Steven a portrait of Ester.

Another company, Blessed Buy Israel (blessedbuyisrael.com), was founded in 2016. In addition to highlighting products to purchase—such as exquisite ceramics, jewelry and coffees—they inform shoppers about misguided decisions. In one of their blogs, they cited the Seattle teachers union’s (SEA) recent decision that endorsed BDS to stand with “oppressed people in Palestine.” SEA also included a slanderous resolution to ban the Seattle Police Department from receiving training from the Israeli Defense Forces (IDF). The truth is many U.S. police departments travel to Israel to learn excellent peacekeeping strategies. The absurd lie is that Israel trains U.S. police forces to unfairly target minorities—a theory that has been widely discredited.

Lev Haolam (LevHaolam.com) is another source for buying products from the biblical heartland in support of a local family business. They state, “Our region is most affected by terror and international boycotts in all of Israel.” Their subscription specialty is packing a hand-picked surprise-box of seven or eight products. The high-quality products are shipped free to their subscribers worldwide. They rightly define BDS as bigotry, discrimination, and anti-Semitism.

Truly, subscribers and philanthropic investors, both Christian and Jewish, are large and small financial activists who are committed to the biblical heartland. Judea and Samaria are biblical not only for Jews as their ancestral homeland; they are biblical for Christians who read and treasure both the Old and New Testaments and know that the Christian faith was born on Israeli soil.

Barkan Industrial Park in Samaria is an example of successfully shaping peaceful coexistence between Palestinian Arab and Jewish workers. BDS may demonize Israel, but it is estimated that Israeli businesses offer employment to more than 30,000 Palestinians in Judea and Samaria. I witnessed it in person when I attended the Israel Government Press Office’s Christian Media Summit in November 2019. I was delighted that Samaria was on our agenda and where the Lipski Company hosted us at the industrial park. It is one of 146 companies that employ Palestinians. CEO Yehuda Cohen gave us a tour around the huge factory where plastic and sanitization products are made. Lipski has made a significant mark for peace since 2007 in the biblical heartland. At the time we visited, Cohen employed 60 Palestinians and 40 Israelis in both managerial and regular positions. CEO Cohen explained, “The atmosphere is of one big family.”

The factory pays a good Israeli salary—more than Palestinian Authority jobs—and supplies benefits (pension, recreation, vacations, etc.) to all employees. Walking around the factory, we experienced an atmosphere of cooperation and hard work. Cohen commented, “The people want to live in peace. It seems that working together also brings the hearts closer, regardless of ethnic or political identity. I believe that peace will be obtained not through boycotts, but through living together.”

A good economy is vital for Judea and Samaria. The region is also an indispensable part of Israel’s security. Without Judea and Samaria, Israel is only nine miles wide in places. Its mountain ranges overlook Ben Gurion international airport, and most of Israel’s main cities would be a scant 15 miles away from its enemies. Judea and Samaria are strategic since they provide high ground and territorial depth. History makes it plain. When Israel gives up land for peace and relocates its citizens—as it did from Gaza in 2005—the results are disastrous. Terror takes over, and Israel’s enemies grow bolder with Iran’s backing.

To reemphasize God’s ancestral deed to the Jewish people in ancient times, Samaria was designated in history as Israel’s northern kingdom and Judea as the southern kingdom. In the first Temple era, Samaria was deemed Jerusalem’s “elder sister” (Ezekiel 16:46: “Your older sister was Samaria, who lived to the north of you”). Shiloh was Israel’s spiritual center until the first Temple was built. The moveable Tabernacle was located three millennia ago in the heart of Samaria for 369 years.

It is imperative that Christians stand against the anti-Israel and anti-Semitic BDS movement and instead support our Jewish brothers and sisters in their ancestral, biblical heartland through Economic Zionism.

Join with CBN Israel this week in praying for Israel and specifically the biblical heartland of Judea and Samaria:

May we pray for Israel this week in thankfulness that God keeps His promises, declaring in Isaiah 61:4—“They will rebuild the ancient ruins and restore the places long devastated; they will renew the ruined cities that have been devastated for generations.”

Your ticket for the: Economic Zionism: A Powerful and Peaceful Way to Oppose Economic Warfare Against Israel

Economic Zionism: A Powerful and Peaceful Way to Oppose Economic Warfare Against Israel