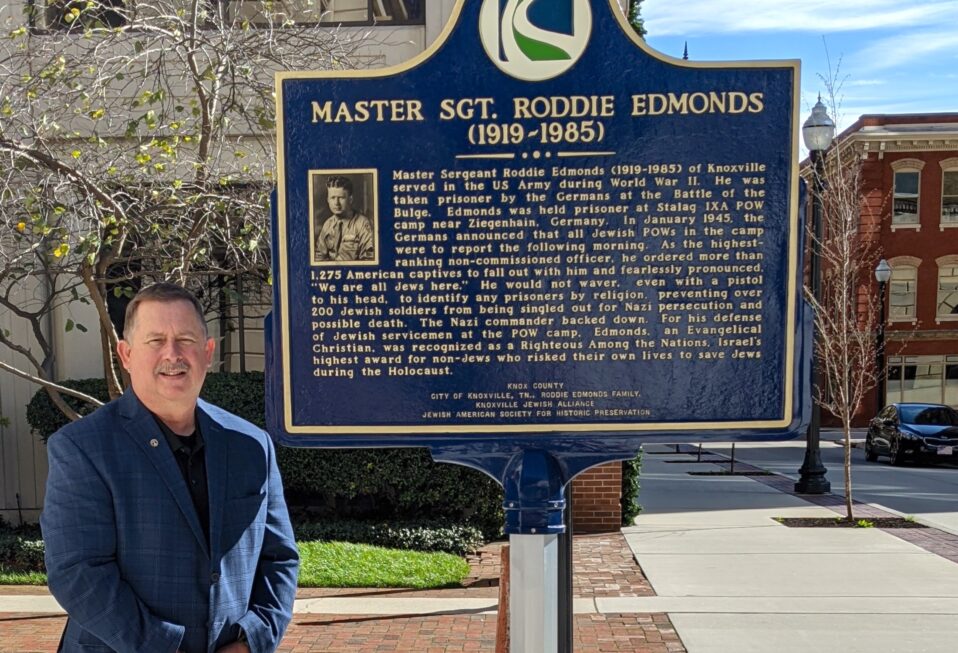 If you stood outside the East Tennessee History Center on one of Knoxville’s busy streets, you couldn’t miss the handsome new blue marker with gold lettering extolling the heroism of a native son. Last Friday, August 20, this was the site of a memorial celebration attended by the Reverend Chris Edmonds, his family, and Tennessee dignitaries—including U.S. Senator Marsha Blackburn and U.S. Representative Tim Burchett—to honor Edmonds’ father, Master Sergeant Roddie Edmonds. Roddie Edmonds was a Christian, a humble, hardworking family man who enjoyed singing gospel music. He died in 1985 and could have never imagined that his words and actions in World War II would inspire millions of Christians and Jews alike.

What drew the crowd together on what would have been Roddie Edmonds’ 102nd birthday? Under a tent on that scorching hot summer day, Chip Rayman, immediate past president of the Knoxville Jewish Alliance, described Master Sgt. Edmonds as “Knoxville’s Schindler” and spoke of this remarkable man’s extraordinary lifesaving efforts during the Second World War.

Welcoming everyone, Chris Edmonds, who pastored Piney Grove Baptist Church in Maryville, Tennessee, is now the full-time CEO of Roddie’s Code, a foundation he established to move his dad’s legacy forward. Chris describes it as “God’s call to inspire heroes everywhere through my father’s fearless faith and righteousness.” Roddie’s Code means to choose righteousness, oppose hatred, dignify life, and esteem others.

It was Roddie’s Christian faith, his personal code, that resulted in saving 200 Jewish GIs under his command in Stalag IXA Nazi POW camp and later devising a plan that rescued all 1,292 of his men from a death march. Roddie and his soldiers in the U.S. Army’s 422nd Regiment, 106th Infantry Division, were captured in 1944 by Nazis in the freezing snows of the Battle of the Bulge. One night in the POW camp it became known to Sgt. Edmonds that the following morning, Nazis planned to separate the Jewish soldiers for execution or deportment to deadly labor camps. Sgt. Edmonds instructed his men to follow his lead and stand together.

On the frigid morning of January 27, 1945, all soldiers were ordered to “fall out.” A Nazi major then commanded all Jews to step forward. Not a man moved. He shouted his order again. Finally, he walked over to Sgt. Edmonds, the highest-ranking American soldier present, and demanded obedience. Roddie responded by reciting the Geneva Convention: “All I am required to provide is my name, rank, and serial number, and that is all you’ll get. You’ll have to shoot all of us, and after the war, you will be tried for war crimes.” The Nazi officer put a gun to Edmond’s head, bellowing, “They cannot all be Jews!”

“We are all Jews here,” Edmonds calmly replied.

“I know that my father was willing to die to save Jewish men under his command,” Chris comments, “because he believed a Jewish man, Jesus Christ, had died to save him.” Chris continues, “Once the major pulled the gun and pressed it to my dad’s head, any one of those 1,292 men could have stopped him and told him who the Jews were.” Roddie’s regiment was nicknamed the “Golden Lions.” That day, all the non-Jews lived up to that name.

After 100 days, the GIs were liberated and arrived back in the USA on April 28th, 1945. Roddie had jotted in his diary, “I’m just a little guy but war isn’t right. Lives upon lives are lost. People forget God more and more. It seems as if someone should get wise… and let God be our commander.”

Chris’s dad never talked about his heroism, and his war diary was tucked away in a dresser drawer for many years. So Chris never suspected his father’s bravery.

Roddie passed away in 1985, and it was not until 2012 that Chris gained a new perspective on his father’s wartime history. Chris had read his dad’s diary, but he was an active father, grandfather, a busy pastor, and on top of that, he ran a charity that helped teenagers. It took something else to pique his interest in those long-ago events.

“One evening my wife Regina and I watched a TV news program where we learned that nearly 300 World War II veterans died every day,” he said. “I was shocked.” His father’s diary quickly came to mind. That night he googled his dad’s name on his computer: “Master Sergeant Roddie Edmonds.” A tiny fact—a name in a New York Times article from the 1970s—caught his eye. It was a name he’d noticed in his dad’s diary as one of “Roddie’s boys.” Chris prayed right there at his computer. “Lord, your timing is always perfect. Please lead me.”

His curiosity led to extensive detective work that resulted in a trip to New York City in 2013. There, Lester Tanner, one of “Roddie’s boys,” warmly welcomed Chris and Regina to the Harvard Club. Lester was Chris’s first source in learning about his dad’s heroism. “When we started talking, I was shocked to learn that not only did my dad save Lester Tanner’s life, but he saved other men, as well!”

Quickly, the whole story came out. As Lester related the gripping narrative of Roddie’s courage, Chris saw another side of his father whom he already admired and respected so much.

Lester recalled, “Roddie could no more have turned over any of his men to the Nazis than he could stop breathing. He just couldn’t do it. A righteous man.” Lester opened more relationships with more stories from his men—among them Paul Stern, Sydney “Skip” Friedman, Sonny Fox, and Henry “Hank” Freedman. Lester said that he and Paul Stern had been standing right next to Roddie when the Nazi put a gun to his head.

After meeting some of his father’s soldiers and their families, Chris has become close to all of them. Although Paul, Skip, Sonny, and Hank have passed away, Lester is still alive at 98, and Chris communicates with him almost weekly.

Since Chris first read his dad’s diary and heard the stories from “Roddie’s boys,” his father’s firm, calm words in the face of death have gone around the world—from San Diego to Singapore and beyond. Chris’s first talk took place at Temple Emanuel-El in Myrtle Beach, South Carolina, on April 27, 2014. It was Holocaust Remembrance Day, and Chris was the guest speaker provided by the American Israel Public Affairs Committee (AIPAC). The telling of Roddie’s story generated awe, gratitude and tears—mine included—throughout the synagogue.

One of the greatest experiences in my nine-year tenure at AIPAC as their Southeast Regional Christian Outreach Director was meeting Chris, then asking him to speak at the synagogue, where he was welcomed by its outstanding rabbi, Avi Perets. His dad’s story is still impacting millions of people through his 2019 book, No Surrender, and the documentary created by the Jewish Foundation for the Righteous, Following the Footsteps of My Father, which points to the depth of the bonds between the Christian and Jewish communities.

Chris guesses he may have spoken about his father “hundreds of times now.” After Myrtle Beach, AIPAC scheduled him all over the United States, culminating in 2016 when they featured him at their annual Policy Conference in the Washington, D.C., Verizon Center. Eighteen thousand attendees sat spellbound, then responded with a standing ovation. Christians United for Israel followed, as did the Simon Wiesenthal Center, Israel’s Yad Vashem, the halls of the European Union, and the U.S. Congress. In addition to these larger venues, Chris has spoken in countless synagogues, churches, and school assemblies, as well as to homeschool, business, and professional associations.

In 2016, with a deeply deserved designation, Yad Vashem chose Sgt. Edmonds as the first American serviceman to receive the “Righteous Among the Nations” honor. It is Israel’s highest tribute for Gentiles, recognizing those who risked their lives during the Holocaust to save Jews.

In between ongoing speaking engagements, Chris remains dedicated to his father’s receiving a posthumous Congressional Medal of Honor. The effort is being led by Sen. Blackburn and Rep. Burchett.

However, Chris is quick to observe that his father’s most important legacy is “Roddie’s boys” and others he saved. Taking into consideration the children, grandchildren, and great-grandchildren of Roddie’s boys—as well as generations to come—Chris comments, “More than 13,000 people are alive and well today because of Dad’s actions.”

Animated by one goal, Chris remarks, “I want the Jewish community to know that my dad’s actions in World War II mean something today as they face more hatred again all over the world. And I want to inspire others, people like my dad, like me, ordinary people, Christians who care about our Jewish friends. You don’t have to be perfect to do something extraordinary.”

Chris motivates us today since anti-Semitism is sweeping dangerously through the world again. “Though Dad lived in dark times, he was a light in the darkness. We can be too. I’m convinced an ordinary life lived well is extraordinary—even heroic.”

We are living in dark times again. May our watchword as Christians be the same as Roddie’s: “We are all Jews here.”

Join CBN Israel this week to thank God for heroes and ask Him to enable us to follow Roddie’s example:

In honoring the Lord Jesus, Chris often refers to Isaiah 26:12: “Lord, you establish peace for us; all that we have accomplished you have done for us.”

Your ticket for the: Defying Nazis: An American Hero Saved Jewish Soldiers Under His Command