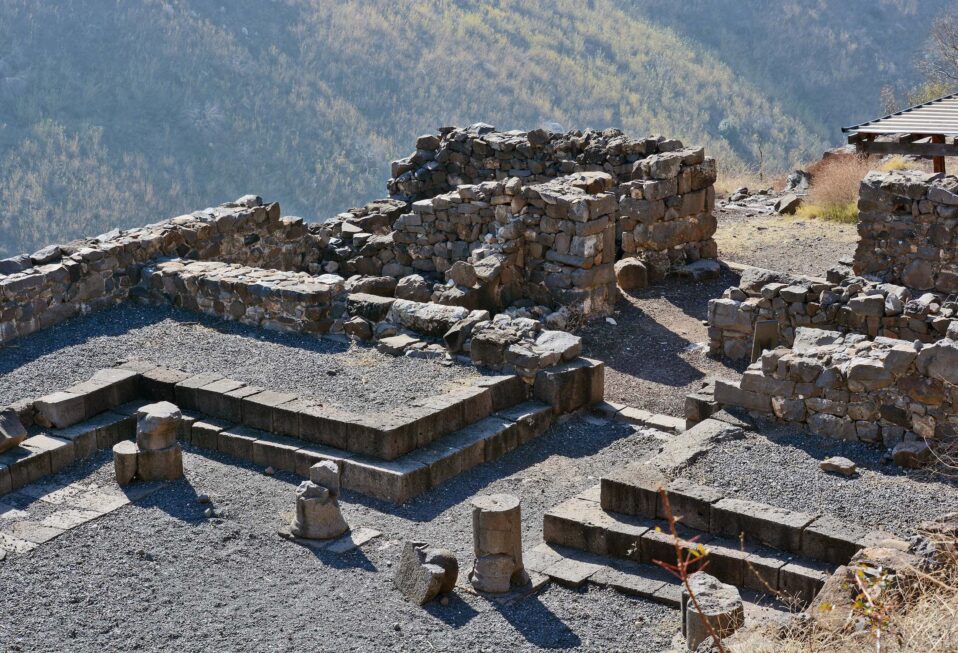 The ancient site Gamla sits in the central Golan Heights about six miles east of the northern end of the Sea of Galilee and the Bethsaida Valley. The ancient village sat on the spur of a hill created by two streams, Nahal Gamla and Nahal Daliyyot. The spur that the village of Gamla sat on can be seen easily from Bethsaida and the Bethsaida Valley; thus, while we never find mention of Jesus in Gamla, he would have known the site. The first century Jewish historian, Josephus, describes the village and the battle that took place there during the First Jewish Revolt (A.D. 66-73).

Gamla offers an important window into Jewish village life in the Galilee and Golan during the first century. Once the Roman army of Vespasian destroyed the site (A.D. 67), it was never reinhabited, and therefore, functions as a time capsule into a first century Jewish village. The primary settlement of the site began in the Hellenistic period. It started as a Seleucid fort. The fort eventually became a village inhabited by Jews in the first centuries B.C. and A.D.

Excavations at Gamla uncovered only a small percentage of the village, but they provide significant information about the Jewish life in the village. Towards the upper part of the hill, excavations uncovered a large olive oil press with a Jewish ritual immersion bath (mikveh) attached to it. This indicates that the inhabitants sought to prepare olive oil with concern for ritual purity. Excavators also uncovered a second large, industrial olive oil press indicating that Gamla served as a center for olive oil production exporting it to other Jewish communities. The community also seems to have grown grain and even practiced viticulture.

Excavators uncovered the largest known urban synagogue discovered in Israel from the Roman period. At the entrance of the building, they found a ritual immersion pool. The synagogue itself consists of the main hall, with benches around the walls of the hall. The focal point being the center of the hall where the reading of the Scriptures and explication would have occurred. To the right of then entrance, in the north wall, was an inset into the wall, which most likely housed a cabinet where scrolls were kept. A small study room is also next to the main hall.

Excavations also yielded evidence of an affluent class within the village. Painted fragments of plaster indicate the presence of wealthy homes. Finger rings and earrings, as well as gemstones and other jewelry attest to an affluence among some of the citizens. The presence of Jewish ritual immersion pools, as well as stone vessels indicate that the population of the village adhered to Jewish ritual purity.

Excavations also attest to Josephus’ story of the fall of Gamla. Evidence of battle, destruction (including the breach in the city’s defensive wall), arrow heads and ballista balls were discovered throughout the excavations. Its destruction preserved this first century Jewish village, which offers one of the best examples of the villages known to Jesus.

Your ticket for the: Biblical Israel: Gamla