The Gush Etzion Tree: A Symbol of Hope in Israel’s Heartland 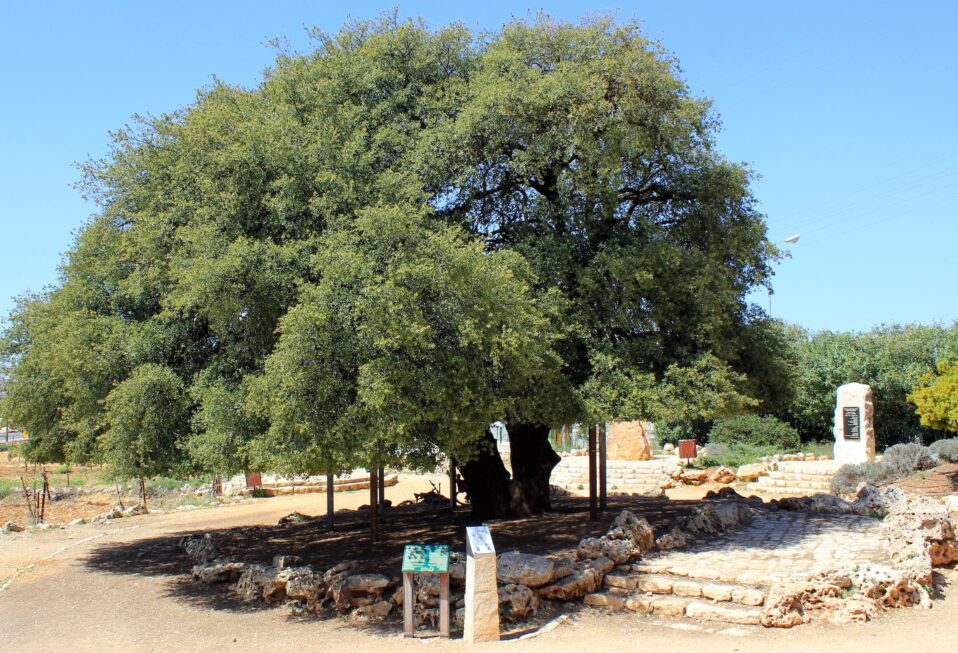 When tourists visit Israel, some sites are absolute essentials for Christians. The Garden Tomb, Western Wall, the Old City, Capernaum, Church of the Holy Sepulchre, and the Sea of Galilee are topmost on most tour agendas. However, Israel possesses endless discoveries stretching from ancient to modern times, with lesser-known tourist destinations full of inspiration and history.

In 2012, on one of my recurring trips to Israel, friends introduced me to Gush Etzion, a region I had never visited. Located in Judea south of Jerusalem, it is about a 15-minute drive from the capital. Gush Etzion is composed of 22 towns—a cluster of communities with good schools, businesses, wineries, recreation, agriculture, and parks. The region has been a security anchor for Jerusalem, punctuated with tragedies and victories alike. The biblical heartland, Judea and Samaria, is often referred to as the “West Bank” as it lies west of the Jordan River. The entire Jewish population of the heartland is more than 400,000 citizens, which includes Gush Etzion.

Here is a brief history of this region. Jewish pioneers attempted to create communities here as early as 1927. After several challenging attempts, four agricultural villages were founded between 1943 and 1947. Appalling battles followed after the November 29, 1947, United Nations 33-12 vote favoring Resolution 181 (the Partition Plan). Tensions dramatically escalated. Although the Jews accepted the plan, the Arabs rejected it.

It is significant to note the historical truth here. The Arabs could have built their own state in 1947-48, but didn’t. Then in 2005, Israel forced its 8,000 Jewish residents to leave behind their businesses, synagogues, and homes in Gaza. When the last Israel Defense Forces (IDF) soldier closed the Kissufim gate, the Mediterranean coastline awaited the decision of Arab leaders to create tourism, prosperity, and freedom for their people. Instead, Arab Palestinians set about to destroy everything in sight that could have benefited them—greenhouses, other businesses, homes, anything left there for their use by the departing Israelis.

In 2007, Gaza’s Palestinians elected Hamas, a terrorist organization. That move has proven a disaster for them and for civilians in southern Israel. Even now, if Palestinian President Mahmoud Abbas chose to follow the lead of Arab nations in the Abraham Accords, it would immediately improve the well-being of the Palestinian population. Renouncing the glorification of terrorists in “pay-to-slay” bonuses for their families and removing their hate-filled media would set them on a more productive path. At present, Israel has no “peace partner,” since Mr. Abbas has refused direct negotiations since 2009.

Looking in the rearview mirror again, on January 15, 1948, 35 Jewish members of the Haganah—Israel’s vital underground military from 1920-1948—were killed by the Arab Legion while trying to resupply Kfar Etzion, one of four kibbutzim in the Gush Etzion bloc. The Jewish defenders fought for about six months. Then on May 12—two days before Israel declared its official statehood on May 14, 1948—Arabs massacred 127 Jewish men and women after 30 Jewish defenders could not hold out against thousands of Arab attackers. As bestselling author Jay Sekulow summed up in Jerusalem: A Biblical and Historical Case for the Jewish Capital, “By holding off the Arab forces for that one critical day, the people of Gush Etzion helped saved Jerusalem.”

In a eulogy for these fallen heroes, Israel’s first Prime Minister, David Ben-Gurion, stated, “I can think of no battle in the annals of the Israel Defense Forces which was more magnificent, more tragic, or more heroic than the struggle for Gush Etzion. … If there exists a Jewish Jerusalem, our foremost thanks go to the defenders of Gush Etzion.”

After the Arab/Israeli War, when the 1949 armistice lines were set, the region was not included. During the 1967 Six-Day War launched by Arab armies, Israel recaptured the region, then began rebuilding (and adding new communities to) the Etzion bloc.

On my visit, after walking around the grounds, homes, and businesses and viewing a film at Kibbutz Kfar Etzion, the most impactful sight for me was the Gush Etzion tree, also called the “Lone Tree” and the “Oak of Return.” It is one of the region’s biggest attractions. There it stood—alone, unremarkable, and plain in its surroundings. Nevertheless, it struck me as poignant and powerful in its longevity and survival. Arabs not only destroyed Jewish lives in 1948; they also destroyed the buildings and pulled up every tree except for the lone oak. It was easy to understand its significance for the Jewish people.

Last December, in fact, members of the Gush Etzion Regional Council and government leaders rededicated the Lone Oak Tree plaza after two years of renovations at the site. At the ceremony, Gush Etzion Regional Council head Shlomo Ne’eman spoke about the biblical “first tourists”—the Twelve Spies in the book of Numbers. He went on to describe the Lone Oak: “As a testimony to the glory of the land, they brought back fruits from this region. … The Lone Oak has strong roots—long and deep, which symbolizes the strength of Gush Etzion.”

His quote echoes my reaction not only for the enduring tree, which has been standing for 700 to 800 years, but for Israelis—and for us walking out our Christian faith. It is a symbol of strength and deep roots enduring in war and peace. The Jewish homeland has withstood, recovered, and thrived. Its history is much like the personal history of humankind, living in the paradox of tragedy and joy.

Another first for me was walking where Abraham, Isaac, and Jacob walked! Called the Way (or Path) of the Patriarchs, it is located in Gush Etzion.

The truth and the facts about Israel are repeatedly proven—first by the Bible in ancient times, then reinforced today by archeology and science. Anti-Semitism, twisted facts, propaganda, and lies do not override the God of Abraham, Isaac, Jacob, and Jesus.

Hope in the heartland is intensified by the fact that our Lord, a Jewish Rabbi, has chosen to live in our hearts. In thanks for our Savior alone Who gives us new and eternal life and the symbol of the Lone Tree!

Please join CBN Israel in prayer this week for the nation and people of Israel:

May we reflect upon Psalm 1:3, a beautiful verse to pray over Israel as well as our own walk with God: “He is like a tree planted beside streams of water that bears its fruit in season and whose leaf does not wither. Whatever he does prospers.”

Your ticket for the: The Gush Etzion Tree: A Symbol of Hope in Israel’s Heartland

The Gush Etzion Tree: A Symbol of Hope in Israel’s Heartland