The Twelfth Man for Israel 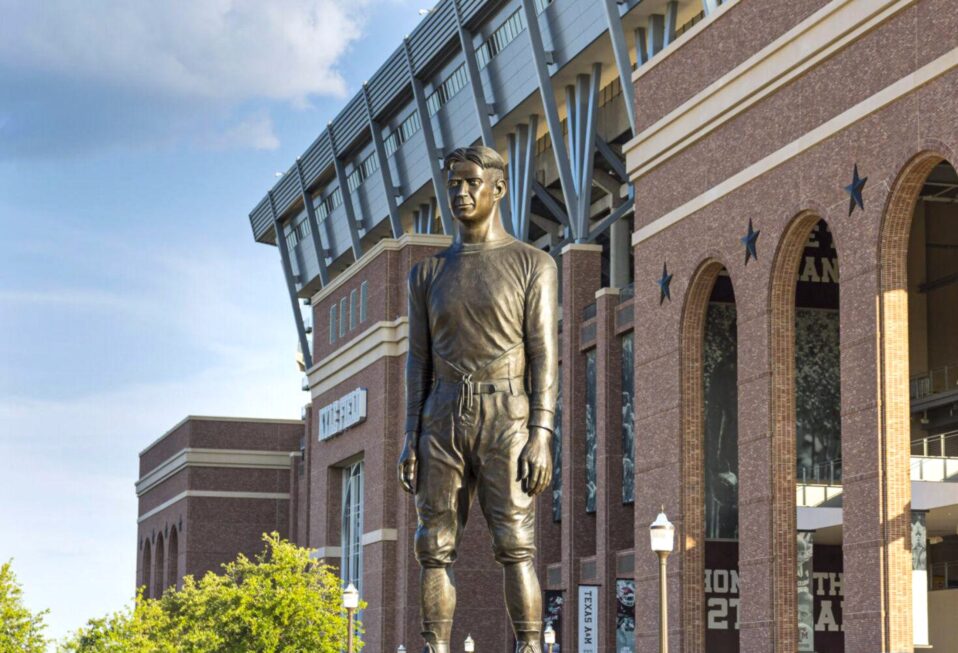 In a stunning upset on October 9, “The Twelfth Man” seemed to play a significant role in the victory in College Station, Texas, when the Texas A&M (Aggies) football team beat the No. 1 University of Alabama Crimson Tide. It ended Alabama’s 19-game winning streak in a game that Aggies and Crimson Tide fans will undoubtedly discuss and dissect for decades.

Last Saturday, in the last minutes of the fourth quarter, unranked Texas A&M and national champion Alabama tied at 38-38. The Aggies then made football history in a thrilling game from beginning to end when they beat Alabama in the last seconds with a field goal. Final score: 41-38. A big part of their win may have been “The Twelfth Man.”

Who or what is “The Twelfth Man”? It’s A&M’s entire student body—and fans. The expression goes back a hundred years, when the Aggies were faring badly against a top-ranked school. A&M’s 11-man football team was exhausted, with injuries mounting. Hope of a win grew weaker with every yard played.

Their coach, Dana X. Bible, remembered that one of his former teammates, E. King Gill, was up in the press box helping reporters identify the players on the field. Bible summoned Gill to play if needed. Gill suited up under the bleachers in an injured player’s uniform. He stood on the sidelines for the entire game. The Aggies won, cheered on by Gill. He later said, “I wish I could say that I went in and ran for the winning touchdown, but I did not. I simply stood by in case my team needed me.” Gill’s attitude of service and support won the hearts of the student body and has grown into a tradition, a trademark, and a legacy that envelops the entire university.

A 6-foot-4-inch bronze sculpture of E. King Gill stands near Kyle Stadium as a reminder that the Aggie fans are “The Twelfth Man.” They stand for the entire game; they chant, shout, and surround their team with roars of high-spirited support. Their war hymn’s lyrics sing about unity whether they are down or up.

As fans of Israel, our “war hymn” is the Bible. It teaches us how to support the Jewish people—God’s “chosen people”—and His covenants with them that last forever.

When it comes to Israel, the concept of “The Twelfth Man” is a way to describe Christians as Israel’s Twelfth Man and Woman. Cheering with “Next year in Jerusalem” and being ready to do whatever is necessary to support the Jewish state, Christians stand up against anti-Semitism and for Israel.

Christians’ obvious support for Israel has grown exponentially in the last 30 to 40 years. We are some of the Jewish nation’s most enthusiastic fans! God has given us a second chance to stand with His people after centuries of well-founded Jewish suspicions leading up to and after the Holocaust. Suspicions and fears about Christians intensified in 1930s-40s Germany.

Putting it in simple terms, during Hitler’s rise to power, German pastors and priests believed Hitler’s March 23, 1933, speech where he outrageously claimed that Christianity was the “foundation” for German values. Silence reigned even as evil broke out into the open. Deportation trains rumbling through German towns and villages sounding with cries of anguish were ignored. Like a twelfth man for Jews, German theologian Dietrich Bonhoeffer was eventually hanged in Flossenbürg concentration camp for his outspoken opposition to the evil regime. The fact of Jews distancing themselves from Christians may be even better understood knowing that the SS sang Christmas carols about baby Jesus while daily acting as murderous thugs.

Nevertheless, thousands of courageous moments stand out during the Nazi oppression, as catalogued by Yad Vashem, the World Holocaust Remembrance Center in Jerusalem. For the last 50 years, they have undertaken a project of thankfulness and honor to recognize the Righteous Among the Nations. Presently nearly 28,000 Gentiles, who saved Jews in many nations, are honored. Each of them acted as “The Twelfth Man.”

Good signs have indeed emerged, but opposition to those of us who support Israel is growing. This is why we need more and more leaders like Pat Robertson, founder of The Christian Broadcasting Network (CBN), who made a solemn vow to God in 1974 that he and the organizations he headed would always stand with Israel—no matter the cost. For nearly 50 years, Robertson and CBN have kept that promise and have influenced millions of Christians worldwide to support the Jewish nation and people.

Then  in 1980, when International Christian Embassy Jerusalem (ICEJ) came into being, Israeli hearts began to warm up to Christians backing the State of Israel. Forty years of their trustworthiness has blossomed into multi-level blessings, including their annual Jerusalem March, which in non-COVID years is one of the biggest events in Israel—another manifestation of The Twelfth Man, with 7,000 Christians waving flags and singing in the streets of Jerusalem.

Evangelical fact-based media has made a considerable difference, with the CBN News Middle East bureau established 20 years ago and Erick Stakelbeck’s popular program, The Watchman, on Trinity Broadcasting Network. Smaller media outlets likewise retain their importance in their commitment; they are The Twelfth Man, too.

Another manifestation of Christian support occurred during the Second Intifada (Palestinian uprising) of 2000-2005, when Arab terrorists murdered more than 1,000 Jewish men, women, and children. Although many Jews fled their country and most Israel tours were canceled, many groups of Christians decided to come anyway. Israelis noticed.

The years since the end of the Second Intifada have accelerated and deepened ties between Israelis and Christians. An historically Jewish institution, the American Israel Public Affairs Committee (AIPAC) began proactively welcoming evangelical Christians into their ranks in 2005. They have become expert advocates with the U.S. Congress to strengthen the U.S.-Israel relationship legislatively. In 2006, Reverend John Hagee founded Christians United for Israel (CUFI)—now with more than 10 million members—which launches important petitions to Congress and holds educational events across the U.S.

AIPAC and CUFI are considered leaders in educating and reaching out to the 535 members of the U.S. Congress on legislation that benefits the United States and Israel, especially in our mutual security interests.

Congressional support is significant with votes on our annual security aid to Israel. As Iran’s threats via surrogates Hamas, Hezbollah, and Syria are relentless in their anti-Israel hatred, multiple Christian individuals and organizations are active in supporting, I daresay, thousands of prayer groups, humanitarian aid, donations, tours, and fact-based media. They are also loyal in their opposition to the Boycott, Divestment and Sanctions (BDS) movement, which promotes economic warfare against Israel. Individual and small group relationships between Israelis, Christians, and Jews worldwide undergird the bigger landscape of tangible pro-Israel support.

The question must be asked, though: Will Evangelical Christians—an estimated 600 million worldwide—turn our numbers into a far greater Twelve Man/Woman operation with anti-Semitism surging in so many parts of the world?

We have plenty of options for supporting Israel. I have mentioned only a few of them. So let us keep in mind the unity, support, and longevity of Texas A&M’s Twelfth Man.

Eli Gold, known as the “radio voice of Alabama Crimson Tide football,” summed up the concept of “The Twelfth Man,” saying in the last two seconds of the game, “Let the crowd tell the story.” Gold remained silent, and when the stadium echoed the roar of fans overcome with joy, every listener knew that their home team in College Station, Texas, had won! Gold is now in the Alabama Sports Hall of Fame, not because he played in the game, but because he contributed via his own popular broadcasts. In an interview, he observed that he was thrilled that a “Jewish kid from Brooklyn with zero athletic talent would make it into the Alabama Sports Hall of Fame.”

As Christians, may we stand strong as enthusiastic fans of the world’s only Jewish state, unified and active on behalf of Israel. We don’t have to be the star on the field. Like E. King Gill, we can cheer on the sidelines for Israel—by encouraging them with our support in multiple ways.

Think of what we can accomplish with the example of “The Twelfth Man”—to cheer Israel on in word and deed as they confront the unrelenting hostility from the U.N. and global mainstream media, are singled out for condemnation, boycott, divestment, and sanctions, and endure the constant threats of war and terror along their dangerous borders.

Please join with CBN Israel this week in praying that Christians will support Israel like never before:

As we join together in prayer, may we reflect upon Ephesians 6:11: “Therefore, put on the full armor of God, so that when the day of evil comes, you may be able to stand your ground, and after you have done everything, to stand.”

Your ticket for the: The Twelfth Man for Israel

The Twelfth Man for Israel